Rebuilding Haiti with bamboo and hemp 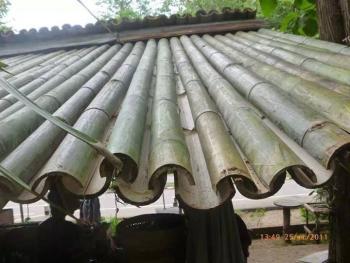 It is perplexing why Haiti, a seismically active country, continues to allow construction of dangerous concrete homes that collapse on residents during earthquakes. So many lives are being senselessly lost under collapsing concrete when there are environmentally friendly alternatives such as bamboo and hemp.

The earthquake that struck southern towns in Haiti on Aug. 14 collapsed hundreds of buildings, killing thousands of people based on preliminary counts; the one that leveled Port-au-Prince in 2010 killed more than 200,000; and the quake that flattened the Sans-Souci Palace in 1843 killed over 5,000, unleashing a cholera epidemic in its wake. And more earthquakes can be expected, since Haiti sits on the Enriquillo-Plantain Garden fault zone.

So why do Haitians continue to dwell in dangerous concrete homes? Many Haitians consider concrete homes symbols of social advancement and greater security compared to alternatives such as homes of wood, wattle and daub or shanties — which 65.9 percent of Haitians are stuck in. Well-designed, high-quality concrete is desirable for its strength in hurricanes, which are common in Haiti. But over time, intense rain, sun and wind weaken the widely used diluted concrete, making it more susceptible to collapse.

And that makes Haitians’ reluctance to use alternative building materials such as bamboo and hemp perplexing. The stigma that many Haitians attach to these potential construction materials greatly imperils and impoverishes them.

Bamboo is a proven earthquake-resistant building material and, given its staggering growth rate, an ideal plant for sustainably rebuilding in areas devastated by earthquakes. The best bamboo cultivars for construction grow to heights of between 40 and 50 feet. Bamboo possesses high tensile strength equivalent to low-carbon steel. Using bamboo in home construction can greatly reduce need for steel and wood, significantly lowering building costs.

Likewise, the woody core of hemp can be used to create hempcrete, a lightweight, cement-like material that can be used as insulation and to build bricks and non-weight bearing wall panels that won’t crush people in an earthquake.

The failure to invest in hemp is tied to draconian bans on the cultivation of cannabis. The Haitian government has made low-THC hemp plants illegal, putting out of reach this multi-faceted plant, whose fibers, seeds, flowers and leaves can be used in products ranging from cannabidiol to nutritious protein to industrial ropes and building materials.

But here is another reason to consider using these plants: both bamboo and hemp are renewable resources that suck up carbon dioxide and release oxygen into the atmosphere. Large-scale cultivation of bamboo and hemp could be the foundation for long-term sustainable housing, which is the opposite of concrete. So why isn’t the government investing in bamboo and hemp to provide better, safer homes for Haitians?

The Haitian government and people can reduce the tragic deaths and destruction that follows the country’s earthquakes, but they must find the determination to encourage the widespread cultivation of bamboo, to legalize and encourage the cultivation of hemp, and they must show Haitians how to build effectively with both. If not, it’ll be more collapsing concrete and needless deaths.

Benjamin Hebblethwaite is an associate professor in the department of languages, literatures, and cultures at the University of Florida, where he teaches courses on Haiti, Jamaica, and France. His books include the forthcoming A Transatlantic History of Haitian Vodou, Stirring the Pot of Haitian History, and Vodou Songs in Haitian Creole and English.