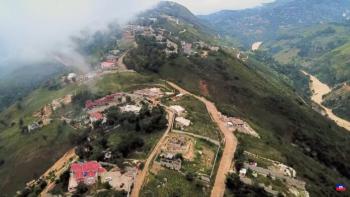 The wealthy mountain neighborhood of Laboule 12 is now home to a kidnapping gang which has more firepower than the bourgeois residents of the area, sowing panic.

Fighting between the armed groups of Port-au-Prince’s poor neighborhoods has flared dramatically in recent days as de facto President Jovenel Moïse pushes to hold a referendum on Haiti’s Constitution despite national and international outcry.

The violence is even reaching up into the sacrosanct mountainside neighborhood of Laboule, panicking the Haitian bourgeois families which live there.

At about 4 a.m. on Jun. 1, armed men from Belair aided by others from the Cité Soleil gang of Jean Pierre Gabriel attacked the neighborhood of Delmas 6, which is controlled and defended by Jimmy “Barbecue” Cherizier, the leader and spokesman of the G9 alliance of armed neighborhood groups. Five or six men from Delmas 6 were killed in the fighting, according to press reports.

Three weeks ago, Cherizier was ambushed and wounded in the chest in Cité Soleil. The .762 bullet from an M14 passed very near his heart and out of his back, but he is apparently in stable condition and recuperating.

Meanwhile, in recent weeks, gang members from Village de Dieu, Grand Ravine, and Croix-des-Bouquets – all anti-G9 areas infamous for their kidnapping – have set up armed bases in Laboule 12, near the giant sand mine which provides the raw material for most of the construction done around the capital. According to a highly placed international security source, the leader of the composite group is Ti Makak, a cousin of “Izo,” the leader of Village de Dieu’s Five Seconds Base, and brother-in-law of the late renowned gang leader Arnel Joseph, whom Haitian police killed in February.

The gang base in Laboule 12 feels confident enough to carry out abductions of nearby foreigners, having kidnapped both British and U.S. citizens.

The security forces of wealthy Laboule residents have skirmished with the gangs but “are outgunned,” according to our security source. The Haitian National Police (PNH) have so far not intervened but are planning a response soon, our source says.

Meanwhile, at a cost of over $40 million, Jovenel Moïse continues his campaign to carry out a nationwide referendum on rewriting Haiti’s 1987 Constitution on Sun., Jun. 27. Even the U.S. government, which is politically and financially supporting the Moïse government’s plans to hold national elections in September and November, does not support the holding of the Constitutional referendum.

Aware of the widespread popular outrage at Moïse trying to illegally rewrite the Constitution while there is no parliament and the opposition’s traction in calling for a boycott and disruption, Deputy Assistant Secretary of State Laura Lochman said in a May 18 virtual press briefing that the referendum “should be seen as inclusive, transparent, and credible to the Haitian people.” She said that Washington and other members of “the CORE group” (a collection of U.S.-friendly ambassadors) “argue that at this stage the referendum process is not sufficiently inclusive, participatory, or transparent. Such a reform should take place on a broad consultation that involves all the active forces of the nation.”

Lochman also stated that “we have emphasized to the government of Haiti that we will not provide financial support for a constitutional referendum, and we have consistently stated that a constitutional referendum should not delay or derail the scheduled legislative or presidential elections needed for Haiti to exit its current irregular period of rule by presidential decree.”

But the current administration’s obsession with using an illegal government to try to reestablish through likely bogus elections the appearance of legality, legitimacy, and democracy is getting real push-back from not only the Haitian opposition, Haitian people, and growing numbers of Democratic law-makers. On May 29, the Miami Herald published an editorial entitled “Stop pushing for elections in Haiti, President Biden. They will only make things worse.”

“For months, the administration has been following its predecessor’s mantra of ‘elections at all costs’ by calling on Haitian President Jovenel Moïse to hold legislative and presidential elections this year,” the editorial written by Nancy Ancrum states. “But in insisting that elections are the only way forward, the Biden administration has failed to address the stark realities that led to its decision to grant [Haiti] a new TPS designation. Conditions on the ground in Haiti make clear that Moïse cannot hold free, fair, and credible elections: serious security concerns, social unrest, human-rights abuses, crippling poverty.”

The editorial concludes by saying that Biden “should start with the United States openly and unapologetically opposing the Jun. 27 constitutional referendum that… will not bring Haiti closer to democracy. Rather, it will pull the country deeper into chaos and authoritarianism.”

The rise in violence in Haiti’s poor – and now rich – neighborhoods may well be linked to the Haitian opposition’s counter-offensive to foil the Jun. 27 referendum.