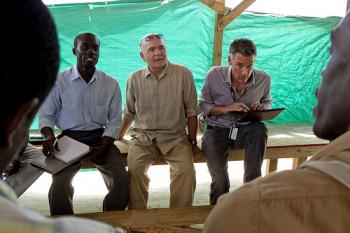 Report of the independent expert on the situation of human rights in Haiti, Michel Forst

In the present report, the independent expert emphasizes that the rule of law, in  the broadest sense of the term, is a critical element that cuts across all aspects of development in Haiti.

On civil and political rights, the independent expert describes the progress made and the obstacles encountered in regard to elections, reform of the justice system, the Legal Service Training College, and the fight against corruption. He then analyses the state of the prison system, the use of extended pretrial detention and the police service.

He also reviews the situation of children, particularly with regard to adoption, the “restavek” and victims of trafficking, in order to draw attention to the need for more stringent laws and for juvenile courts.

The independent expert then turns to the question of economic, social and cultural rights in Haiti, makes some specific recommendations about the rights to food, education and health care, and discusses the cholera issue and the situation in the camps.

Finally, the independent expert proposes that a mechanism for the progressive transfer of international protection functions to the Haitian authorities should be established based on action in four key areas: the appointment of an inter-ministerial delegate for the rule of law; the granting of stronger powers to the Office of the Ombudsperson (Office de la Protection du Citoyen) and to the Civil Defence Department (Direction de la Protection Civile); and the establishment of a human rights bureau in the centre of Port-au-Prince.

8. ... “Eight million Haitians, out of an estimated population of 10 million, live without electricity. Five million cannot read or write and are in the dark both day and night. Eight Haitians out of every 10 are living on less than $2 a day. Two per cent of Haitians control 69 per cent of the country’s wealth. With a working population that is put at 4.2 million, fewer than 200,000 have regular formal work. At least 84 per cent of university graduates live abroad.” (From: Message of President Martelly on the general situation of the country, delivered at the opening of Parliament on 9 January 2012.)

11. The establishment of the rule of law cannot be reduced to reforming judicial institutions, the criminal justice system, and the police or prison service so as to pave the way for the enjoyment and exercise of civil and political rights.

12. The establishment of the rule of law also means ensuring the proper functioning of public services and of the institutions that are required not only to safeguard persons and property but also to enable all citizens to exercise all the rights set forth in the International Covenant on Economic, Social and Cultural Rights, which the Haitian Parliament has ratified. By making this political gesture, the Government of Michel Martelly has sent a strong signal of the determination and commitment of the Government and the Parliament to improving socioeconomic conditions in the country.

17. In May 2011, the mandates of 10 senators who had been elected in 2006 expired, depriving the Senate of a third of its members and making it difficult to secure the stable majority required to vote through the vital reforms proposed by President Martelly. Moreover, the Government’s decision to replace almost all the 120 mayors elected in 2006, whose mandates had long expired, was met with bafflement and incomprehension on the part of the national and international communities.

27. The justice system is still broadly dysfunctional and its main weaknesses are amply documented in numerous reports by experts and civil society organizations. While the figures show that genuine progress has been made in the lower courts and the appeal or habeas corpus courts, there is still a long way to go before the justice system is working as it should be.

42. In December 2012, there were 8,860 persons in total in the country’s 17 prisons, as compared with 1,935 in 2004. With regard to space, the Government has proposed a plan to create 5,700 new places in prisons. These places will be needed, given the marked increase in the size of the prison population.

43. The space allocated to convicted and remand prisoners is 60 cm2 on average, and only 34 cm2 in Anse Prison in Vaux. The International Committee of the Red Cross (ICRC) recommends that, in very grave crisis situations, the floor space available to each detainee should be at least 2 m2.8 Despite the efforts of the international community and of ICRC, to which the independent expert should like to pay special homage, prisons in Haiti are still places where cruel, inhuman and degrading conditions obtain. Prisons should not be places of suffering but rather places of deprivation of liberty in which all rights must be afforded with, of course, the exception of the freedom to come and go.

44. Hygiene and health-care conditions are generally very poor, despite ICRC assistance and the refurbishments carried out at some prisons. Moreover, because of the small number of doctors and nurses, access to care, where it exists, is limited to symptomatic treatment of the most common illnesses. The independent expert recommends that prisons be supplied with sufficient stocks of medicines, drugs and food to guarantee prisoners their right of access to health care and food.

46. The recent opening of the Croix des Bouquets prison offers a glimmer of hope and an insight into what a prison system established on the basis of respect for the relevant international standards could look like in Haiti. The independent expert thanks the donors, first and foremost Canada, for this initiative, and once more recalls that prison should be the place where rehabilitation of convicted and remand prisoners begins.

47. The construction of the Croix des Bouquets prison is clearly a step forward, but it cannot in and of itself provide a satisfactory response to the country’s immense needs. The institution is well built and well designed. However, now that it has just been inaugurated, it must be said that without a special effort to ensure that it is run properly, all the hopes placed in it risk being disappointed, due to inadequate funding. The resources available in terms of staffing, security installations and budgetary allocations are insufficient at present to allow the prison to run according to the standards that were set.

49. Prison conditions, then, continue to amount to cruel, inhuman and degrading treatment within the meaning of the Convention against Torture. The independent expert recommends that the State sign the Convention and ratify its optional protocol at the same time. The Office of the Ombudsperson, which is also active in prisons, in Port-au-Prince and the departments of Haiti could then be designated as a national mechanism for the prevention of torture. In that capacity, it could conduct visits to detention facilities. The independent expert suggests that the Haitian authorities reflect upon this matter, in close cooperation with the Association for the Prevention of Torture, which is recognized internationally as having genuine expertise in this area.9

52. All the studies show that if the prisons are overcrowded, it is largely because of high rates of extended pretrial detention. Pretrial detention rates vary greatly from one jurisdiction to another, notwithstanding the work done by the boards that release prisoners who have not been tried or who have served their sentence. The disparity between Port-au- Prince and the departments is particularly striking. Ninety per cent of prisoners in Port-au- Prince are in pretrial detention, as compared with only 57 per cent in the regions. The independent expert recalls that he would like a more in-depth study to be funded with the aim of devising solutions for each individual jurisdiction rather than making generalized recommendations that do not address the variety of situations encountered.

55. Although reforms of the police service have been under way for years, grave concerns about the institution persist...

The right to food and food security...

79. The combination of hurricanes Isaac and Sandy and of the heatwave of August 2012 raises the issue of food security in Haiti. After Isaac, experts who were questioned said that agricultural output would cover not more than half of the country’s food needs. Moreover, various problems linked to the availability of local food products on the local market, the sharp rise in the prices of imported foods and the growing strength of the dollar had a severe impact on the poorest and most vulnerable groups living in particularly difficult conditions in departments in the south and west of Haiti.

The right to education...

83. President Martelly has made the right to education one of the four priorities of his mandate, and several tens of thousands of children have received a free education financed partly by a tax on revenue from mobile communications. The independent expert welcomes the commitment made to fulfilling a major pledge to realize the right to education by offering free schooling to all. However, many problems have yet to be resolved. Too often, school buildings are inadequate - 60 per cent of schools are housed in unsuitable premises (small churches or hangars) with up to 75 students per class - and have no teaching equipment, and some 90 per cent of schools are private schools.

85. The massive influx of international medical organizations, the extraordinary mobilization of Governments after the 2010 earthquake and the ensuing cholera epidemic made it painfully clear that the health system needs to be completely overhauled to make it accessible to all persons without discrimination; otherwise, the right to health care will remain a dead letter. Moreover, owing to a lack of professional prospects, many doctors and other Haitian health professionals have chosen to go abroad to work, thus depriving the population of their services.

86. Since the departure of several relief organizations, the situation has become more difficult; free treatment, which was made available in 2010, has been suspended, with the result that tens of thousands of people are denied access to quality care. Health conditions are deteriorating steadily, and the health budget is still very small and cannot meet the needs. The worsening state of the public finances, due to the economic situation, cannot but cause concern among the Haitian and international experts who deal with this issue.

87. Without resources, public hospitals cannot function. The absence of health structures in the areas furthest away from the capital means that a large section of the population has no prospect of receiving treatment, and this at a time when the infant mortality rate in Haiti remains one of the highest in the Caribbean region.

89. The question of what caused the outbreak of the [cholera] epidemic in Haiti remains a burning issue that has attracted significant public controversy. While the independent expert deplores the way that certain organizations have exploited the issue for political ends, he is aware of the need that victims or their families have expressed to know the truth and perhaps even to be given compensation. He recalls that silence is the worst response.