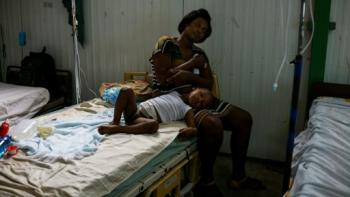 With no oxygen in intensive care or gloves in the emergency room, residents at Haiti's largest hospital have gone on strike to protest the filthy environment and demand six months of back pay.

"We have almost nothing when we talk about emergency services," said Emmanuel Desrosiers, 24, one of the doctors-in-training at the State University of Haiti Hospital (HUEH) that began the work stoppage Monday.

"When a patient arrives, when we should immediately take charge, we start by listing the things they or their family need to go buy."

The HUEH, known as the "general hospital," is where the most disadvantaged families in this impoverished Caribbean country crowd. Buying the medical supplies themselves is a financial headache, but private clinics are far too expensive.

In crumbling buildings in the center of Port-au-Prince, male and female patients are crowded together in tiny rooms, while trash cans overflow.

"We feel ridiculous when we give hygienic advice to patients," one resident said of the situation.

The residents' selflessness as they work in an unsanitary environment is compounded by the fact that they have not been paid since the start of their residency, nearly six months ago.

After five years of medical studies, the state is required to pay them 9,000 Haitian gourdes (HTG) per month -- only about $100, due to the devaluation of the national currency.

Nothing is being done about the hospital's disrepair, with those in charge waiting for a new building to be completed, according to resident Yveline Michel.

The new HUEH will have two floors and more than 530 beds once it's finished -- but it's unclear when that will be.

The project began after the January 2010 earthquake, which destroyed more than half the hospital. The United States, France and Haiti invested $83 million in a new hospital, which should have been completed by 2016.

Instead, there is little visible activity on the construction site, which can be seen through the windows of the current building.

Due to the heat, the windows are always open, letting in noise and dust from the street. There are only a few fans in the hospital rooms, which do little to combat the humidity or the flies.

"At any moment we could lose patients, but the state isn't doing anything to save their lives," said Michel, 25.

"We're striking for the population, since it should make these demands."

But some locals question the residents' position because the strike prevents the already struggling hospital from functioning.

Since the strike began, the poorest families in the area no longer know where to go for medical emergencies, as the residents are in charge of admitting patients.

"Due to the lack of resources and the unsanitary environment, there are always people dying in the hospital, so it's not the strike causing that," said Michel in response.