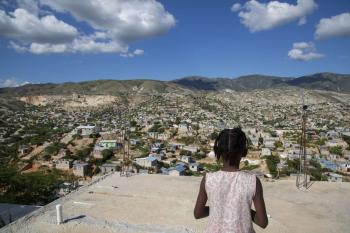 Residents of Canaan, a neighborhood that formed outside Port-au-Prince after the 2010 earthquake, were originally counted among Haiti's displaced population. People in makeshift housing face threats ranging from hurricanes to sexual assault, to cholera, causing many to flee. Photo: Marie Arago.

In 2014 Canada lifted a moratorium on deporting Haitians, but government documents obtained by The Breach reveal the decision was based on flawed assumptions and inaccurate data. The decision, which led to hundreds of deportations, also overlooked an unmistakable humanitarian crisis: Haitians were facing a raging cholera epidemic while the country was still struggling to recover from the devastating earthquake of 2010.

After the policy change came into effect, Canada “removed” 1,638 Haitians, according to the Canada Border Services Agency (CBSA). 1,544 Haitians—nearly 95 per cent of the total number deported since the end of the moratorium in 2014—have been expelled from Canada under Trudeau’s leadership.

The Temporary Suspension of Removals (TSR) for Haitian nationals had been in effect since 2004, when Canada, the United States and France supported a coup d’etat that overthrew the government of Jean-Bertrand Aristide, Haiti’s first democratically elected president. The Liberal government of Paul Martin supported Aristide’s ouster both diplomatically and militarily. That government introduced the moratorium because—as Canadian officials themselves acknowledged—the entire Haitian population was at risk in the violent aftermath of the coup.

Haiti has been mired in political instability ever since. And by 2014, when Canada lifted its moratorium on deporting Haitians, conditions in the country had grown even more dangerous. The country suffered from lasting effects of the 2010 earthquake, which destroyed countless homes, hospitals and schools, and from cholera. Practically unheard of in Haiti, the cholera outbreak began when a United Nations contractor dumped sewage from a base housing cholera-infected UN peacekeepers in an important Haitian water source just eight months after the earthquake. The earthquake is estimated to have killed somewhere between 150,000 and 300,000 people. Nearly 10,000 Haitians died over the following decade in the cholera outbreak, which leading international epidemiologists say was caused by the UN’s negligence.

In December 2014, in the midst of this crisis, the Conservative government of Stephen Harper announced that “conditions have improved” in Haiti as justification for lifting the moratorium. “The government of Canada no longer considers that there is a risk to the entire civilian population,” the release continues, quoting then-Minister of Public Safety and Emergency Preparedness Steven Blaney as saying the decision was made based on “a thorough review of country conditions.”

The findings of this review are summarized in a briefing memo prepared by CBSA, which The Breach obtained from the department of public safety through an access to information request. More than 689,000 Haitians had been infected by cholera by the end of 2013. Of those, nearly 8,500 had died. However, the epidemic is not once mentioned in the 2014 memo.

The briefing references statistics produced by the International Organization for Migration (IOM), an intergovernmental agency that reported a significant decrease in the number of people living in the camps where many Haitians displaced by the 2010 earthquake took refuge in the immediate aftermath of the disaster.

“Of the 1.5 million internally displaced people when the earthquake struck in January 2010, about 175,000 remain in the established camps,” the note says, citing IOM’s statistics about the decrease in Haiti’s camp population as evidence that “a generalized risk to the civilian population no longer exists.” It also states that “Internally Displaced People are being resettled into safe housing.”

But the CBSA’s interpretation of the decreased numbers are not supported by the IOM’s data.

The IOM’s September 2013 report containing these statistics also shows that relatively few of the earthquake-displaced Haitians who left the camps during the period the agency counted the decrease were in fact resettled into safe housing. Of approximately 316,000 Haitian households who left camps, less than 56,000—or about 18 per cent—were resettled into housing through one of the programs designed for that purpose. Another 16,000 families were driven out of camps through forced evictions. The rest, which includes 244,000 families—more than 77 per cent of those who left camps—are classified as “spontaneous returns.” Those counted in this latter category include former camp residents who were neither resettled, nor evicted, but were simply no longer there when IOM returned to count the camps’ residents, in addition to more than 60,000 Haitians who lived in three large informal settlements whose residents the agency suddenly stopped counting as part of Haiti’s official camp population due to pressure from the Haitian government.

In a separate study published in 2011, IOM surveyed camp residents who left camps during the first year after the earthquake—the period in which the agency documented the greatest decrease in camp population. Most survey respondents reported that they were driven out either by forced evictions—which were often orchestrated by private landlords who used violent means to drive homeless earthquake survivors out of camps—or by the dangerous conditions in these camps, whose residents lacked access to shelter, food, water and healthcare.

In the initial months after the 2010 earthquake, there were more than 1,000 camps in Haiti, according to IOM. The agency has confirmed that it did not count deaths in these camps, whose residents were particularly vulnerable to threats ranging from hurricanes to sexual assault, as well as cholera and other deadly diseases. Yet through interviews with Haitians who lived in four of the camps, an investigation by The Intercept documented dozens of deaths in those camps alone, where people reported they had family members who died of diseases like cholera, or due to underlying health conditions aggravated by the hazardous conditions and lack of basic services in the camps where they lived.

As of 2018, dozens of the Haitians interviewed for that investigation were still living in dangerous informal settlements whose residents reported that conditions were even worse than in the officially recognized displacement camps where they took refuge in the immediate aftermath of the earthquake. Yet because the settlements are not recognized as camps by agencies like IOM, many of these Haitians and their dead relatives were counted as part of the decrease in camp population that CBSA cited as evidence that the type of risk that long prevented the agency from deporting people to Haiti “no longer exists.”

Conditions in Haiti “have now improved,” the CBSA memo concludes, also citing Canada’s “humanitarian and security” assistance to Haiti. This aid includes funding for the UN mission whose negligence is widely blamed for the cholera outbreak, the “successful” 2011 Haitian presidential election which garnered record-low voter turnout, and the reconstruction of some schools.

Many Haitians who were already living in Canada when the moratorium ended were able to regularize their status through a special immigration program the federal government rolled out in 2014. Yet the situation remains highly precarious for thousands of others who have since sought asylum here.

When Prime Minister Justin Trudeau assumed office, he took pains to brand Canada as a country that welcomes migrants and asylum seekers. The Trudeau-led government, however, made only partial efforts to reverse the Harper-era policy.

Due to escalating political unrest in Haiti, another type of temporary suspension on deportations called an Administrative Deferral of Removals has been in effect for Haitians since February 2019—offering temporary respite for many.

Yet migrant justice groups like Montreal’s Action Committee on Non-Status Persons warn that this offers far less protection than the moratorium Canada lifted in 2014.

Administrative Deferral of Removals can be removed “at any given time,” says the committee’s Frantz André, a particularly concerning reality given the current level of violence and insecurity in Haiti, which André believes is even greater than in the aftermath of the 2004 coup, when Canada introduced the moratorium on deportations. “It’s definitely worse than 2004. There’s no state. There’s no government. There’s no security. There’s no safety. It’s worse right now, so how can we explain not having a more permanent moratorium?”

In a written statement, CBSA defended its record of deporting people to countries like Haiti, telling The Breach that such removals  contribute “to the Government of Canada’s public safety and security priorities.”

“The removal of individuals who have no legal right to stay in Canada is necessary to maintain the integrity of Canada’s immigration program.””

Public Safety Canada did not respond to a request for comment by publication time.

Isabel Macdonald | Isabel Macdonald is an investigative journalist who has written for The Nation, The Intercept, and The Guardian. She has a PhD in Communication Studies from Concordia University.