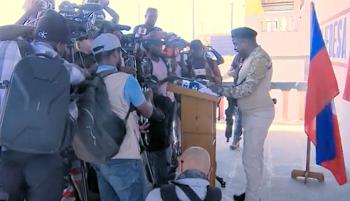 Jimmy “Barbecue” Cherizier speaking at a Nov. 3, 2021 press conference, where he said the Haitian bourgeoisie’s “blood-sucking system lends itself to no challenge, no idea of change.”

Update: As this article went to publication, Jimmy Cherizier announced a temporary lifting of the FRG9’s blockade on the Varreux gas terminal for a one week period, deeming it a “truce for a week of reflection.” The truce will end on November 18, 2021, the anniversary of the Battle of Vertières, which marked the end of Napoleon’s bid to restore slavery in Haiti. Cherizier laid out nine demands; among them was Acting Prime Minister Ariel Henry’s resignation, the withdrawal of police forces from neighborhoods controlled by the FRG9, and the return of gasoline to its pre-blockade price. The government is unlikely to fulfill any of the demands, portending a resumption of the stand-off at the Varreux terminal following the anniversary.

On Monday evening, several specialized units of the Haitian National Police (PNH) stationed armored vehicles at strategic points near the Varreux shipping terminal, the country’s main shipping terminal. It was the first attempt of the government of Acting Prime Minister Ariel Henry to wrest control of the port from the federation of armed groups known as the Revolutionary Forces of the G9 Family and Allies: Mess With One, You Mess With All, or the FRG9, and its leader, Jimmy “Barbecue” Cherizier.

The operation failed before it could begin, as at least one armored vehicle broke down and police units squabbled amongst themselves, a clear sign of the dwindling morale among the nation’s police forces, to which Cherizier belonged until he was fired in 2019.

The FRG9’s gas gambit has set the stage for a showdown between the increasingly popular federation of neighborhood self-defense groups, whose territory comprises more than half of Port-au-Prince; the transnational class of Haitian bourgeoisie that owns the terminal; and the anemic police force that suffers from low morale, leadership turnover, and meager pay. Despite its glaring weaknesses, the PNH retains Washington’s support, at least for the time being.

The seaside terminal is centrally situated between the slums of Wharf Jérémie on the south and Cité Soleil on the north, two of the poorest in Haiti, both of which are largely under the control of the FRG9. Some 90% of Haiti’s fuel supplies flow through the terminal’s pipelines, making it a chokepoint for the country’s energy and consumption needs. While many wealthy families have fuel supplies stocked in private tanks, the blockade of the terminal has sent prices skyrocketing and created a panic in the already weak government.

Despite the initial setback, by Wednesday police managed to secure a corridor that allowed at least 30 trucks carrying diesel to leave the terminal.

The police battle for control of Varreux has been accompanied by attacks on Cherizier’s home neighborhood of Delmas 6, sparking days of skirmishes between police units and the rag-tag FRG9. According to Delmas 6 resident Mario Brunache, police have stationed an armored vehicle at the entrance to Delmas 6, from where they fire tear gas and live ammunition at the densely populated neighborhood. No casualties have been reported. Photos have circulated, however, showing a young boy who was killed by gunfire in the neighborhood of Fort Dimanche, which is also located adjacent to the Varreux terminal.

A nation roiling with suspicion and confusion

Since the July 7 assassination of President Jovenel Moïse, Haiti’s political class has been in shambles. Moïse’s replacement, Henry — a member of the neo-Duvalierist Haitian Baldheaded Party and longtime asset of the U.S. — is wanted for questioning in the murder. The former chief prosecutor, Bed-Ford Claude, says phone records show that Henry spoke to Joseph Felix Badio, who allegedly commanded the Colombian assassins, hours after the embattled president was machine-gunned in his home in the upscale neighborhood of Pèlerin.

But before Henry could be brought in for questioning, he fired Claude and publicly dismissed his claims, saying he has no recollection of the phone calls and calling them “diversionary maneuvers to sow confusion.” Henry’s amnesia and obstinance have only reinforced suspicion that he did indeed play some role in his Moïse’s murder.

Cherizier, meanwhile, has been the leading public figure to take up the call of “Justice for Jovenel,” responding to popular outrage among the vast majority of Haitians that their head of state was murdered by foreign mercenaries in an apparent plot of the country’s bourgeois overlords. Only weeks before Moïse’s murder, Cherizier had led a demonstration demanding the president resign and calling for an armed revolution against the bourgeoisie.

Cherizier said at a November 3 press conference in the neighborhood of La Saline:

We never supported Jovenel Moïse, but today we ask for justice for Jovenel Moise because we defend principle. Even though we saw Jovenel was not good and had problems with him, we would never enter into a plot with little Colombian scoundrels to assassinate the first citizen of the nation.

As the investigation stalls out, many suspect the hit was an inside job with complicity from political and security officials.

On October 17, Haiti’s leader traditionally visits Pont Rouge, the site where founding father Jean Jacque Dessallinese was assassinated. When the unpopular Henry attempted to reach the monument, gunfire forced his motorcade to flee the scene. Cherizier, dressed in a new white suit and surrounded by throngs of demonstrators, calmly walked to the memorial and paid respects to Dessalines and Jovenel Moïse, signaling the FRG9’s prominence on the national stage.

Taking action in a leadership vacuum

In the face of government footdragging, Cherizier and the FRG9 took a bold action, blocking the gas terminal until Henry resigns and is put on trial to deterimine what role, if any, he had in the murder of Moïse.

Although Cherizier has made the FRG9’s demand clear in multiple videos he uploads to social media websites, some are attempting to distort the rationale for the federation’s blockade on the gas terminal. Opposition figures, mainstream media and anonymous Twitter accounts have circulated rumors that the FRG9 is holding the gas for ransom, demanding 50 million Haitian gourdes ($507,000) to unblock it. The sensational claim originates from an article in the Gazette Haiti that cites a single “government source.” Gazette Haiti is owned by Assad Volcy, a political opportunist who has filled many low level government posts and often shifts his alliances for personal advancement.

As US mulls its options, pressure for military intervention grows

For its part, the U.S. seems uninterested in advancing the investigation. After sending FBI and DHS officials to “assess the situation and how we may be able to assist,” Washington has said comparatively little. In sharp contrast, it recently reiterated its call for the arrest of Cherizier, to whom it applied Magnitsky sanctions in December 2020. On November 5, the newly appointed chargé d’affaires, Kenneth Merten, told Haiti’s largest newspaper Le Nouvelliste that the sanctioning of Cherizier “explains what we think of him” and that “we always want Haitian laws to be respected.”

It appears that Merten’s public comment was a green light for PNH to attempt to dislodge the FRG9 from the Varreux gas terminal. This subordinate relationship between the PNH and the U.S. has a precedent. Diplomatic cables released by WikiLeaks revealed how Haitian police frequently coordinated their hiring, vetting and operations with the U.S. Embassy.

Though the Biden administration has rejected a military intervention in Haiti and is instead leaning on the PNH to break the FRG9’s hold on the Varreux terminal, a growing chorus of establishment figures is demanding Biden deploy troops.

Hours after the assassination of Moïse, the Washington Post editorial board demanded a “swift and muscular intervention.” Since then, the editorial board has published four more calls (2, 3, 4, 5) for intervention, with its most recent arguing that “to oppose intervention is to be complicit in the resulting chaos and suffering.”

On September 23, U.S. Special Envoy for Haiti Daniel Foote resigned, citing the “inhumane” deportations of Haitian asylum seekers and complaining that his “recommendations have been ignored and dismissed.” Among those proposals was Foote’s call for the Biden administration to send special forces to train an “anti-gang task force” in the PNH.

Calls for intervention were again renewed with the October 16 kidnapping of one Canadian and 16 American missionaries by the 400 Mawozo gang, a bitter rival of the FRG9.

The next day, neoconservative member of Congress and House Foreign Affairs Committee member Rep. Adam Kinzinger (R-IL) appeared on CNN to tell Jake Tapper that the U.S. should reject negotiations with 400 Mawozo and “do whatever we need to, on a military front or a police front.”

With American citizens captive, National Security Advisor Jake Sullivan said that the U.S. deployed a “significant number of law enforcement specialists and hostage recovery specialists,” adding that “we are looking at every possible option for how to go about doing that.”

With media attention on the scourge of kidnappings in Haiti, Pierre Esperance — director of the the National Defense Network For Human Rights, or RNDDH, Haiti’s leading human-rights group — accused FRG9 LA Saline leader Serge “Ti Junior” Alectis of involvement in the kidnapping of a Christian pastor named Jean Ferret Michel. The RNDDH is funded by the National Endowment for Democracy, a CIA cutout formed in the 1980s to meddle in foreign politics, and anti-communist billionaire George Soros’s Open Society Foundation.

Faced with this accusation, Cherizier and the FRG9 held a demonstration and press conference in La Saline denouncing Esperance and asking residents to open their homes for journalists and police to certify that neither Pastor Michel nor anybody else was in their captivity.

Days later, the pastor was released — not by the FRG9, but by the 400 Mawozo gang — for a $550,000 ransom. Pierre Esperance has not issued a statement acknowledging his error.

As the gas crisis escalated, Cherizier issued an open letter calling on “the United Nations in general and the so-called friendly countries of Haiti, in particular the United States of America, to register in this page of history as loyal allies who want the well-being of the Haitian people by divorcing the status quo.”

In English-language media, however, the statement was spun as a request for support from the U.S. A widely shared Al Jazeera English report titled “Gang boss calls on the US to help overthrow gov’t” said that Cherizier wrote “a letter to the US ambassador asking for American support.” But the report conveniently ignored the fact that the letter was addressed to the “Citizens of Haiti and the whole world” and cc’d to “Prime Minister of Facto Ariel Henry, Senior State Officials, The Private Sector, Civil society, Political parties, The Diplomats, International Organizations, Non-Governmental Organizations, Spoken, written, television and online media.”

This blatant falsehood is typical of mainstream media coverage of Cherizier and the FRG9.

On October 27, the Associated Press published an article stating as fact that Cherizier demanded $500,000 a month from Youri Mevs, owner of the West Indies Group conglomerate that owns the Varreux terminal. In paragraph 17, however, the authors reveal that Cherizier’s extortion of Mevs is a mere allegation — one that Cherizier strongly denies.

As push comes to shove

With the PNH stymied, calls for the U.S. to invade are gaining steam. Former State Department official Luis Moreno wrote on Twitter that FRG9 “will force the International Community’s hand” and that an intervention is “inevitable.” In the U.S.-orchestrated 2004 coup, Moreno personally led the kidnapping of Haiti’s democratically-elected President Jean-Bertrand Aristide.

As the stand-off at the Varreux terminal continues, and with mainstream media uniformly allied against the FRG9, time will tell if the Biden administration will satisfy the growing chorus of demands for intervention, or if Jimmy Cherizier and the federation’s tactics will force Ariel Henry’s resignation and advance Haiti towards a revolution.

Dan Cohen is the Washington DC correspondent for Behind The Headlines. He has produced widely distributed video reports and print dispatches from across Israel-Palestine. He tweets at @DanCohen3000.