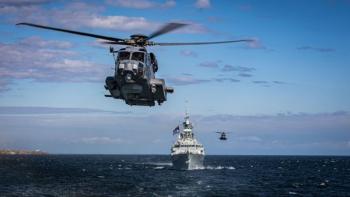 Recently, a number of right wing think tanks in Canada and allied countries, including the Macdonald-Laurier Institute (MLI) and the Australian Strategic Policy Institute (ASPI), have been publishing articles urging Canada to take a greater interest in establishing a powerful military and economic presence in the so-called “Indo-Pacific.” One would be forgiven for being unfamiliar with the term. Prior to the 2010s, the term “Indo-Pacific” was not one of common usage, but over the past decade or so, it has been increasingly employed in a geopolitical context, specifically by the US and aligned states in their global crusade to “contain” China.

The term demarcates a geographical zone comprising the tropical area of the Indian Ocean, the western Pacific, and the waters connecting the two. The emergence of this term in geopolitical discourse is linked to US-led anti-China strategies—namely, the securing of a “free and open Indo-Pacific” in which Washington remains the dominant power broker, while China is encircled by US allies who will theoretically limit China’s ambitious and successful economic integration with surrounding countries.

Gurpreet Khurana, an Indian think tank writer and naval captain, is sometimes credited with bringing the term into modern usage. In a January 2018 interview with The Diplomat, he explained the economic and political factors that motivated the creation of this in-vogue geopolitical distinction. “The trigger for the ‘Indo-Pacific’ coinage,” he claims, “was China’s increasing politico-military assertiveness…These developments led to anxieties in many regional countries, including India and Japan.”

Khurana states that, in 2006, the Indian and Japanese governments began sharing strategic assessments that sought to take advantage of China’s “key strategic vulnerability, viz, its energy lifelines transiting the Indian Ocean.” As such, the “‘Indo-Pacific’ idea”—or the notion that likeminded states along what former Japanese Prime Minister Shinzo Abe called “the Confluence of the Indian and Pacific Oceans” must cooperate to counter China’s economic expansion—“was an opportunity to showcase the Indian Navy’s capability to moderate China’s behavior.”

By the end of the Trump administration, the US had abandoned the “Asia-Pacific” terminology in favour of the “Indo-Pacific,” emphasizing the government’s view that the Indian Ocean-Pacific Ocean combine had become a regional expanse whose domination by the US and its allies was one of Washington’s fundamental global concerns. Khurana identifies two primary reasons for this shift in US focus: the rise of China, and Washington’s opinion that India would be a valuable weapon in the ‘new Cold War’ against its ascendant rival, a “net security provider” in his words.

So, while the “Indo-Pacific” terminology emerged out of strategic cooperation between India and Japan, it has since been fully adopted by the US in its global program to counter China’s expanding economic influence by using India, Japan, and other regional countries as weapons in its anti-China armoury.

Recently, Canada has begun using the Indo-Pacific terminology as well, indicating its own growing interest in combatting China’s influence in the region. On June 9, 2022, Minister of Foreign Affairs Mélanie Joly announced the creation of Canada’s Indo-Pacific Advisory Committee (IPAC). While the news release announcing the committee’s establishment does not mention China once, it does state that the goal of IPAC is to “drive expanded and deepened regional partnerships” and “enhance…regional security” in order to combat “increasing threats to global stability.” The news release ends by wholeheartedly endorsing Washington’s call for a free and open Indo-Pacific: “For the benefit of both the people of the region and Canadians, Canada is actively investing in the Indo-Pacific region to support a free, open and inclusive Indo-Pacific that contributes to a rules-based international order.”

One aspect of IPAC’s work will involve deepening “economic and defence partnerships” in the region. The coupling of “economic” and “defence” makes it clear that Canadian economic and military interests in the region go hand-in-hand. Therefore, increased military collaboration is evidently one aspect of Canada’s inchoate “Indo-Pacific” policy.

Flows of weaponry from Canada to allies surrounding China demonstrate a clear increase in Canada’s military footprint there. From 2020 to 2021, exports of Canadian military goods to key allies in the region rose noticeably, particularly in the case of Japan, whose imports of Canadian arms jumped from $42 million in 2020 to $280 million in 2021. Combined military exports to the three non-US “Quad” countries—Australia, India, and Japan—skyrocketed by 350 percent over the same period.

On June 7, 2022, President Joe Biden visited Tokyo and announced the formation of the Indo-Pacific Economic Framework for Prosperity, or IPEF, which consists of twelve members: Australia, Brunei, India, Indonesia, Japan, South Korea, Malaysia, New Zealand, the Philippines, Singapore, Thailand, and Vietnam. The press release announcing IPEF’s creation insisted that “the United States is an Indo-Pacific economic power” and “expanding US economic leadership in the region is good for American workers and businesses—as well as for the people of the region.”

While it is obviously unlikely that all or even most of the above-listed countries would form a unitary military bloc in the event of a US war with China, it is worth noting that Canadian arms sales to countries currently in IPEF have also increased exponentially over the past year. In 2020, military exports to countries presently in IPEF totalled $173.5 million. In 2021, military exports to IPEF countries more than doubled, with key “Indo-Pacific” countries like India and Japan accounting for the most substantial increases. This trend indicates that increased economic integration of Western countries with “Indo-Pacific” nations is accompanied by increased military collaboration—and when one remembers that the global agenda of the US and its closest allies is confronting China economically and if need be militarily, such trends appear far more dangerous than drably-worded press releases suggest.

Canada is not only expanding its military presence in the region through arms exports—it even attempted its own show of force against China (however unpersuasive) when it dispatched the HMCS Winnipeg to the Taiwan Strait in October 2021. When paired with Canada’s increased military footprint in the region, this demonstrated willingness to provocatively send military vessels to China’s coastline represents a perilous escalation of tensions on Canada’s part in service of the US-led Cold War on China.

Despite Canada’s adoption of the US geostrategic heuristic of “Indo-Pacific,” and despite increased military collaboration with the leading anti-China powers in the Indian Ocean-Pacific Ocean combine, right wing think tanks in Canada and abroad are calling for an even more aggressive Canadian foreign policy in the region.

In May and June, the Macdonald-Laurier Institute convened two events at which speakers unanimously endorsed greater Canadian intervention in the region. The first event, titled “Confronting authoritarianism from Europe to the Indo-Pacific,” featured remarks by institute figures and Canadian and US government officials, organized partly around the theme of “How the West can respond to Russia-China in the Indo-Pacific.” The second, a webinar titled “Why Canada needs a robust Indo-Pacific strategy,” argued that Canada “still lacks a well-considered and clearly articulated framework for addressing immediate security needs” in the region and is therefore “risking marginalization.” Featured speakers included MLI fellows, a senior fellow at the Austrian Strategic Policy Institute, a senior fellow at the Tokyo Foundation for Policy Research, and a professor at US Defense Department’s Asia-Pacific Center for Security Studies.

In a recent article republished at MLI, Stephen Nagy, a senior associate professor at the International Christian University in Tokyo and a research fellow at the Canadian Global Affairs Institute, chides Canada for not pursuing formal membership in the Quad, AUKUS, or IPEF, and for not signing a free trade agreement with ASEAN. He claims that Canada’s absence has “damaged Canadian credibility abroad” and allowed Canada to become vulnerable to “economic coercion and the weaponization of commerce” by unnamed actors (presumably China), which has affected the country’s “economic security.” In order to correct these perceived mistakes, Nagy asserts that Canada must adopt a “focused, multilateral and forward-leaning approach to the Indo-Pacific” with the ultimate goal of “try[ing] to shape China’s long-term behaviour.”

On June 21, MLI published a piece by Thomas Wilkins, a senior fellow at ASPI, which bemoans Ottawa’s apparent lack of interest in adopting the “Indo-Pacific” framing, at least compared to Tokyo, New Delhi, and Canberra. Wilkins laments the fact that Canada was not listed on a prominent Australian think tank’s Asia Power Index, an effective power ranking of states within Asia, while countries like Nepal, Laos, and Brunei were included (he is seemingly uninterested in the fact that these three countries are actually in Asia, while Canada is quite clearly not).

Wilkins evidently wants Canada to become a power player in Asia, and if his views can be taken to represent those of the arms industry funded think tank at which he is a senior fellow, then the Trudeau government’s increased military exports and occasional attempts at shows of force are not cutting it for some who advocate a “free and open Indo-Pacific.”

The notion that Canada does not already have significant interests in the countries contained under the “Indo-Pacific” umbrella is misleading. Canada has already articulated that its interests in the region mirror those of Washington, and its military cooperation with nearby US-aligned states demonstrates this reality. In fact, what Canadian leaders need to do is step back, stop inflaming pre-existing tensions in the region, and focus on the myriad social, economic, and political problems inside Canada instead of chaining their country to an antagonistic and, if seen to its confrontational endpoint, suicidal US-led Cold War policy against China.