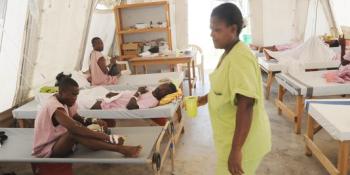 Advocates for Haitian victims of the deadly cholera epidemic that first afflicted their country three years ago said they were taking the extraordinary step on Wednesday of suing the United Nations, asserting that the organization’s peacekeeping force in Haiti was responsible for introducing the disease through sewage contamination from its barracks.

The lawsuit, which the advocates said they would file in Federal District Court in Manhattan on Wednesday morning, will be the strongest action they have taken in pressing the United Nations to acknowledge at least some culpability for the outbreak of cholera, a highly contagious scourge spread through human feces that had been largely absent from Haiti for 100 years.

Cholera has killed more than 8,300 Haitians and sickened more than 650,000 in the earthquake-ravaged country, the poorest in the Western Hemisphere, since it first reappeared in October 2010. While the worst of the epidemic has eased, it still kills about 1,000 Haitians a year.

United Nations officials have said they are committed to eradicating the cholera, but they have not conceded that the organization was inadvertently responsible for causing it. They also have asserted diplomatic immunity from any negligence claims, a position that has deeply angered many Haitians who consider it a betrayal of United Nations principles.

Haitian leaders, while dependent on the United Nations to help maintain stability and provide other important services, have also expressed unhappiness over the cholera issue. In an address last Thursday at the annual United Nations General Assembly opening session, Haiti’s prime minister, Laurent Lamothe, spoke of what he called the “moral responsibility” of the United Nations in the outbreak, and said the efforts to combat it had been far from sufficient.

Forensic studies, including one ordered by the United Nations, have identified the culprit bacteria as an Asian strain imported to Haiti by Nepalese members of the United Nations peacekeeping force, known as the United Nations Stabilization Mission in Haiti, which was first authorized in 2004 and maintains about 8,700 soldiers and police officers there, drawn from more than three dozen member states. The forensic studies have also linked the spread of the cholera to a flawed sanitation system at the Nepalese peacekeeper base, which contaminated a tributary that feeds Haiti’s largest river, used by Haitians for drinking and bathing.

Beatrice Lindstrom, a spokeswoman for the Institute for Justice and Democracy in Haiti, the Boston-based rights group that prepared the lawsuit, said in a telephone interview that the listed plaintiffs were five cholera victims, who were seeking redress for themselves and all afflicted Haitians and their families. Ms. Lindstrom said the institute had decided to file the suit in New York because it is the site of United Nations headquarters and has an enormous Haitian expatriate population.

“We are asking for the judge to find the United Nations liable,” she said. “It has violated its legal obligations through reckless actions that brought cholera to Haiti.” The lawsuit did not specify the amount of compensation sought, which Ms. Lindstrom said would be “determined at trial.”

It was far from clear that the lawsuit would be accepted by the court, which affords broad latitude to diplomatic protections for the United Nations against such litigation. These protections are partly rooted in the formal legal conventions created with the inception of the United Nations after World War II. “The majority view is that the U.N. and U.N. entities are immune from domestic lawsuits,” said Jordan J. Paust, a professor of international law at the Law Center of the University of Houston.

Eight months ago, Ban Ki-moon, the secretary general of the United Nations, informed Haitian leaders that it would not accept claims for compensation made by victims of the outbreak, citing a provision of the Convention on the Privileges and Immunities of the United Nations.

Ms. Lindstrom said the United Nations had also rebuffed her group’s attempts to address the issue. “They’ve refused to sit down for a conversation with the victims, or with us,” she said.

Navi Pillay, the top human rights official at the United Nations, suggested on Tuesday from her headquarters in Geneva that Haiti’s cholera victims were entitled to some compensation, although she did not specify who should provide it.

Farhan Haq, a spokesman for Mr. Ban, declined to comment on the lawsuit but asserted that the United Nations remained dedicated to helping Haiti overcome the epidemic.

“The United Nations is working on the ground with the government and people of Haiti both to provide immediate and practical assistance to those affected,” Mr. Haq said in a statement, “and to put in place better infrastructure and services for all.”