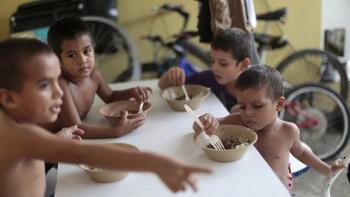 For more on Canada's connection to the Honduran refugee crisis, please read Honduras: Five years after the coup by Sandra Cuff.

Salvador Sanabria was discussing the news about Haitian refugees crossing the border into Canada when he was reminded of the early 1980s, when prime minister Pierre Trudeau opened the door to thousands of Salvadorans in the United States to avoid expulsion to their war-ravaged country.

“I was talking with my friend, and we said, ‘What an irony! Now, we have Justin Trudeau in Canada, the son of the man,” said Sanabria, executive director of the Los Angeles-based immigration advocacy group El Rescate. He now wonders if history will be repeated.

“How is the Canadian government going to respond in the event that the Salvadorans and Hondurans, and probably some Nicaraguans, with no alternative but to look for refuge in another nation, instead of going back to their lands of origin, cross the border into Canada?”

The question is increasingly relevant as a deadline approaches for the renewal or expiration of those groups’ special immigration designation, known as Temporary Protected Status, or TPS. The protections are afforded to citizens of 10 countries that have been ravaged by conflict or natural disaster.

The U.S. Department of Homeland Security told 58,000 Haitians in late May that they should prepare to return home when their TPS expires in January. That advisory coincided with a wave of thousands of Haitian migrants crossing into Canada, most in July and August.

“We’re preparing for the worst … because we have not gotten the best signals from this administration,” said Daniella Burgi-Palomino, a senior associate with the Washington-based Latin America Working Group, which is lobbying U.S. lawmakers for a TPS extension.

The problem, she said, is that the decision to extend or rescind protections for TPS nations lies solely with President Donald Trump and his secretaries of homeland security and state, not with the U.S. Congress.

“I think the Haiti precedent is very likely for the three countries,” Burgi-Palomino said.

The campaign to rally support for extended protections is gathering steam across the United States.

In North Miami, which is home to the largest population of Haitian expatriates, city council passed a resolution in April urging the Trump administration to grant Haitians with TPS the usual 18-month extension. It was ultimately unsuccessful.

There have been other campaigns to encourage local and state lawmakers to put pressure on the Trump administration. Reports this week said nearly 100 Democratic and Republican members of the U.S. House of Representatives have signed a petition urging extended protections for Salvadorans and Hondurans.

“We’ve got Republicans and Democrats. It’s a humanitarian issue,” said North Miami Councilman Alix Desulme, who was born in Haiti and who travelled to the country this summer on a TPS fact-finding mission.

“Haiti is not ready for anything. I don’t think Haiti is ready for the Haitians who are there now, so imagine 58,000 folks heading back to Haiti!” Desulme said.

Conditions are not much better in the three Central American countries seeking TPS extensions, Sanabria said.

“(El) Salvador and Honduras have demonstrated that they do not offer the best conditions for deportees or returning expats,” he said. “Those economies and societies are facing the same challenges that they did before civil war erupted there. The conditions of forced migration remain in those societies.”

After a 12-year civil war broke out in El Salvador in 1979, pitting left-wing revolutionaries against U.S.-backed government forces, hundreds of thousands of Salvadorans sought refuge in other countries.

Many were welcomed to Canada, which had more permissive policies specifically designed for Salvadoran refugees. In 1982, the Trudeau government allowed into Canada many of those Salvadorans who had been denied asylum in the U.S. and were facing deportation.

According to a 1986 report by the Library of Parliament, Canada took in 2,000 Latin American refugees in 1983, 75 per cent of them from El Salvador.

But there was a change in government and, later, a change in immigration policy when thousands of Salvadoran asylum-seekers arrived in Canada between 1986 and 1987, resulting in emergency shelters being erected in churches, Salvation Army buildings and even on the CNE grounds in downtown Toronto.

In 1987, the Conservative government of Brian Mulroney passed immigration changes requiring Salvadorans to obtain a visa before entering Canada and forcing refugee claimants to wait in the United States for their asylum hearings.

Activists across the U.S. are fighting to head off the next, potentially larger, wave of migrants coming to Canada. Some are appealing to employers in the hope that Trump will listen to the economic arguments for allowing housekeepers, hospitality workers and other, often low-wage, workers to remain in their jobs.

“No employer wants to start again, to have to hire and train new workers,” said Wendi Walsh, president of Unite Here local 355, which represents hospitality workers in the Miami area.

“This isn’t a partisan issue … This isn’t the Republican party standing unified. This is President Trump appealing to his most ardent supporters.”