Saudi Arabia is $3.4B behind on its payments for Canadian LAVs 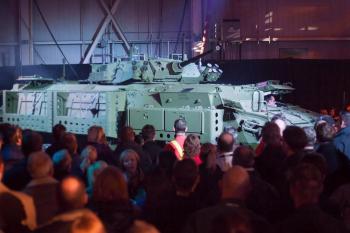 A Light Armoured Vehicle is unveiled at a news conference at a General Dynamics facility in London, Ont., on January 24, 2012. (Mark Spowart/THE CANADIAN PRESS)

The Liberal government endorsed a controversial deal, made by the previous Conservative government in 2014, to supply the Saudis with hundreds of LAV 6.0 advanced combat vehicles used to transport troops on the battlefield.

The LAVs are wheeled military vehicles armed with various weapons, including automatic cannons, machine guns, mortars and anti-tank missiles. They're being produced by General Dynamics Land Systems-Canada (GDLS-C) at its plant in London, Ontario.

The roughly $14-billion contract was brokered and is being managed by the Canadian Commercial Corporation (CCC), a Crown corporation that helps Canadian companies in aerospace, defence, infrastructure and other sectors land contracts with foreign governments.

According to General Dynamics' quarterly earnings statements, the Saudi late payment debt has been growing by $200 million every quarter since the beginning of the year.

According to CCC's website, "every contract signed has the legal effect of being signed in the name of the Government of Canada, providing foreign government buyers with the assurance that the contract will be delivered per the agreed terms and conditions, guaranteed."

That arrangement means that the exporting company acts as a subcontractor and gets paid by the federal government — once Ottawa receives payment from the foreign purchaser.

During a third-quarter earnings call with market analysts on Oct. 23, General Dynamics Corp chairperson and CEO Phebe Novakovic admitted that the payments from Saudi Arabia "have remained slow."

"There's no dispute on the fact that it is owed," Novakovic said. "It's simply a question of timing. And we're still hopeful that we resolve that by the end of the year."

However, it's not clear whether Canadian taxpayers might be on the hook for any interest and late payment fees accrued by the Saudis, according to experts.

General Dynamics said in its quarterly earnings report that the late payment amounts — totalling $2.6 billion US, or roughly $3.4 billion Cdn —will be billed to the Canadian government "in accordance with the agreed-upon contractual terms."

"We continue to meet our obligations under the contract and are entitled to payment for work performed," the company said in its earnings release. "Therefore, we expect to collect the full amount currently outstanding."

Canadian taxpayers on the hook?

David Perry is vice president of the Canadian Global Affairs Institute, an independent foreign policy think-tank. He said the problem with late payments has been known for a while — but experts were surprised by their sheer scope of the unpaid sum.

"Ultimately, right now, it's not the government of Canada in the short term that is on the hook. It's not the taxpayers. It's actually the company that's facing the impact of this payment shortfall more so than taxpayers," Perry said.

A spokesperson for CCC said the Crown corporation is bound by commercial confidentiality and is not able to disclose the details of specific contracts or their management.

"CCC works hand-in-hand with the Canadian exporter to resolve contractual and payment issues while protecting Canadian taxpayers," a spokesperson for CCC told Radio Canada International in an email.

To help General Dynamics deal with the financial shortfall, the federal government announced on Aug. 16 that it would provide a repayable loan of up to $650 million to the company as it "navigates a challenging and dynamic international defence market," officials with Global Affairs Canada said in an email.

On that same date, the federal government announced its intention to acquire 360 LAVs for the Canadian Armed Forces, which already operate a fleet of older LAV models. The $1.7-billion contract was formally awarded to General Dynamics on Sept. 5.

Work has begun on the program and General Dynamics expects to begin deliveries to the Canadian military in the first quarter of 2021, Novakovic said.

"The loan issue is a bit curious because there has been, as best as I can tell, absolutely no information put out about what specifically that's for," Perry said. "It seems very much like it's tied in to this deal with Saudi Arabia."

The deal for the purchase of 360 LAVs for the Canadian military could be linked to the wider deal to sell these combat systems to Saudi Arabia and the late payment issue, Perry said.

"But it's one where I think on its merits it made a lot of sense to go ahead with that specific proposal because we already have a fleet that is mostly built on a different variant of the same vehicle type," Perry said.

It's not clear why the oil-rich kingdom is late in its payments. Saudi officials did not respond to Radio Canada International's request for comment on the matter.

Relations between Canada and Saudi Arabia went into a tailspin in August of 2018, after a series of tweets by Foreign Affairs Minister Chrystia Freeland and Global Affairs Canada criticized the arrests of women's rights activists in the kingdom and urged their immediate release.

Saudi Arabia expelled Canada's ambassador in Riyadh over what officials called "blatant interference in the Kingdom's domestic affairs," recalled its ambassador in Ottawa and halted all new investment and trade transactions with Canada.

In November of 2018, Canada imposed sanctions against 17 Saudi nationals linked to the murder of dissident Saudi journalist Jamal Khashoggi, who was killed at the kingdom's consulate in Istanbul, Turkey on Oct. 2.

However, despite the diplomatic crisis and criticism of the deal by human rights and civil society groups in Canada, the Liberal government has refused to cancel the LAV deal with Saudi Arabia.

Freeland has said that a review of all export permits to Saudi Arabia is ongoing and no final decision has been made. During this review, no new permits have been issued, she said.

That accounts for nearly 62 per cent of the total value of non-U.S. military exports by Canadian defence companies, according to the annual Report on Exports of Military Goods from Canada published by Global Affairs.