Solidarity in Canada with the people of Haiti 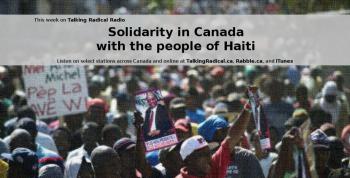 Ralph Jean-Paul of Winnipeg and Travis Ross of Montreal are two of the core members of the Canada-Haiti Information Project, originally founded almost a decade and a half ago as the Canada-Haiti Action Network. Scott Neigh interviews them about events in Haiti, about Canada's complicity in injustice there, and about the past and present of action in Canada in solidarity with popular struggles in Haiti.

Since way back in 1791, from the very beginning of the revolution through which the enslaved people of the French colony of Saint-Domingue freed themselves and founded the republic of Haiti, powerful nations in Europe and later North America have interfered in the island nation, and worked to keep it unjust, unfree, and subordinate. From France extorting huge sums of money at canon-point a few decades after the revolution as payment for the loss of slaves and of the colony, to a twenty year occupation of the country by the United States in the early 20th century, to the collusion between Haitian elites and the Western powers in support of the DuValier dictatorship between the 1950s and the 1980s, imperial meddling in Haiti has been constant.

In the face of all of that, however, the spirit of popular rebellion among the Haitian people has constantly reemerged. It was mass uprisings that brought an end to the DuValier dictatorship in 1986, for instance. And popular movements have worked hard to seize whatever opportunities they could since then to build a more just society – by, for instance, electing reformer Jean-Bertrand Aristide as president in the country's first post-dictatorship democratic election in 1991.

Haiti remains very poor and highly unequal, however, with its economy dominated by a tiny local elite and international capital. Very lax labour laws and the lowest minimum wage in the Americas have contributed to a very high level of exploitation for Haitian workers and profit for powerful corporations. Despite nominal democracy, local elites and their international allies have done everything they can to subvert any progress that would benefit the majority.

Aristide was deposed by military coup shortly after his election in 1991. After various shenanigans in the interim, he again won an election in 2001. Again, he pushed for reforms – quite moderate reforms, for the most part, but ones that might have made life a bit more liveable for ordinary Haitians and cut somewhat into the profits of Haitian elites and their international allies. And again he faced a coup d'etat in 2004, done with the active collusion of the United States, of France, and – most relevant to this show – of Canada. Since then, Aristide's party – called Lavalas, and still the most popular party in the country – has been prevented, in various ways, from participating in elections, and elites have remained firmly in control.

In the wake of the 2004 coup, groups acting in solidarity with popular movements in Haiti sprang up in cities across Canada. These groups soon came together to from a Canada-wide network called the Canada-Haiti Action Network. The initial goals of the solidarity organizing were to draw attention to events in Haiti and Canada's role in them, and to try to hold the Canadian government accountable.

It was the Liberal government of Paul Martin that supported the coup, but Canadian federal governments to this day have remained complicit in the international community's ongoing support for Haitian elites, against Haitian democracy and Haitian popular movements. Solidarity work in Canada has faded considerably since the early years after the coup, but it has not disappeared.

Most of the solidarity committees in individual cities are no longer active, and along the way the Canada-Haiti Action Network renamed itself the Canada-Haiti Information Project. Its focus now is maintaining a website which collects and publishes articles from grassroots and international media sources, in both French and English, for a Canadian audience. At the very least, this work allows Canadians who are interested to more easily educate themselves about Haiti and about Canada's complicity in the injustices faced by the Haitian people. And it provides a tool to put pressure on mainstream journalists who are covering Haiti for Canadian publications to include the kinds of context and background about Haiti and about Canada's role that are usually erased.

Talking Radical Radio brings you grassroots voices from across Canada, giving you the chance to hear many different people that are facing many different struggles talk about what they do, why they do it, and how they do it, in the belief that such listening is a crucial step in strengthening all of our efforts to change the world. To learn more about the show check out its website here. You can also follow them on FaceBook or Twitter, or contact scottneigh@talkingradical.ca to join our weekly email update list.

Talking Radical Radio is brought to you by Scott Neigh, a writer, media producer, and activist based in Hamilton (formerly Sudbury), Ontario, and the author of two books examining Canadian history through the stories of activists.