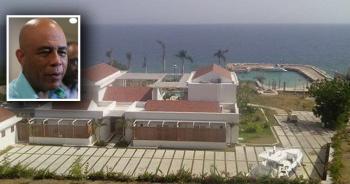 The mobilization in the city of Saint Marc on Wednesday was estimated at ten thousand and was unaccompanied by police according to several news reports of the event. The protesters threatened to enter a phase of burning and destroying and have set their first target to be the estate of former President Michel Martelly.

The beach front home built by President Martelly during his presidency is estimated at $9 million [USD]. Because the former president was suffering from financial woes publicized in well syndicated U.S. newspapers, his purchasing of the land, building and maintenance of this mansion has always been regarded as among the acts of corruption which took place under his presidency.

With his name cited 69 times in the investigative report by the Supreme Court of Auditors and Administrative Litigation (CSCCA), President Jovenel Moïse is regarded as the main money launderer used by the Martelly administration to siphon billions in Petrocaribe dollars.

The protesters in Saint Marc are being reinforced by the mobilizations in Gonaives which have been formidable. They, like other cities and towns across the nation, are demanding the resignation of President Jovenel Moïse and prosecutions against persons responsible for the squandering of $4.2 billion of the Petrocaribe monies.