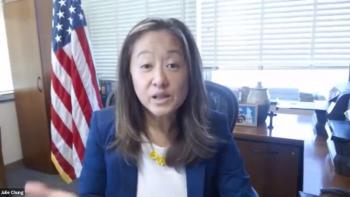 U.S. Under Secretary of State for Western Hemisphere Affairs Julie J. Chung in a virtual press briefing on Haitian Flag Day, May 18, 2021.

Haitians and U.S. citizens “look back with pride at our forebearers who valued freedom above all else and risked everything to secure this inalienable right,” declared U.S. Under Secretary of State for Western Hemisphere Affairs Julie Chung on Haitian Flag Day, May 18, 2021. “Haitians and Americans fought and died for freedom.”

This statement comparing the 1776 “counter-revolution” by slave-owners against the British crown with the genuine 1804 revolution by self-freed slaves against Napoleon’s legions was emblematic of just how fake and absurd the “woke” progressive posturing of the Biden/Harris administration is. It opened an hour-long virtual press briefing aimed at Haitian-Americans – Chung called them “living bridges between the United States and Haiti” –  which sought to tamp down the indignation growing in Haiti’s diaspora (as well as among Democratic congresspeople) at the continuation of the Trump administration’s policies supporting the emergent dictatorship of de facto President Jovenel Moïse. He has been ruling by decree since January 2020, is trying to rewrite Haiti’s Constitution, and plans to hold presidential, legislative, and municipal elections later this year, although the Haitian Bar Association and the Haitian courts have ruled that his term ended on Feb. 7, 2021.

Washington’s position is simply incoherent. It is not supporting the illegal Moïse-championed referendum on Haiti’s 1987 Constitution, which is scheduled to be held on Jun. 27. But it is supporting the de facto regime’s holding of combined national elections in September and November.

Close to 60 people tuned into the Zoom briefing, during which some were able to pose questions that were sent in advance or asked by direct message to the briefing’s chairwoman, Zinaide Wolfington. She then fielded the questions to several State Department officials, who mostly replied by reading from scripted statements (sometimes twice). The briefing was about as exciting, surprising, and revelatory as listening to the recorded announcements in a subway or an airport.

The opening questions were relatively hard-hitting. “Why does the U.S. government continue to prop up the Moïse regime, especially after Feb. 7, 2021, when some argue his mandate ended? Why do you think the USG, OAS, and UN believe Moïse can organize credible, free, and fair elections in Haiti? How can a government which has been found by credible sources to be complicit in human rights abuses be trusted to organize elections? Why does the U.S. government continue to legitimize Moïse’s push for constitutional reform which could set the stage for fraudulent elections?”

“We believe that the Haitian people deserve the opportunity to elect their leader and restore the democratic institutions in Haiti. And in that regard, we will continue to work to hold the government of Haiti to its commitment to free and fair elections in 2021.”

She asserted that “transitional regimes… set back democratic institutions and traditions,” thereby slapping down the principal demand of Haiti’s opposition.

The State Department’s Haitian Affairs Director Apar Sidhu gave one of the most informative answers about how Washington is providing security and funding for Moïse’s elections.

“The United States is providing advice, training, and equipment” to the Haitian National Police (PNH) for election security while the U.S. Agency for International Development (USAID) is providing over $3 million to the National Democratic Institute (NDI) and the International Republican Institute (IRI), the two political intrigue arms of the CIA cut-out National Endowment for Democracy (NED). Sidhu termed their work “political processes strengthening.” The funding will also be going, he said, to the International Foundation for Electoral Systems (IFES), another of Washington’s key election engineering agencies.

Meanwhile, to fight rampant insecurity in Haiti, the State Department’s Bureau of International Narcotics and Law Enforcement Affairs (INL) “also financially supported the Colombian National Police three-month assessment team that provided recommendations on building capacity within the PNH’s anti-kidnapping unit.” The Colombians were brought in shortly after a gang in Village de Dieu wiped out a police SWAT unit on Mar. 12. The INL “is planning additional assistance to help the PNH implement” the assessment team’s recommendations, Sidhu said.