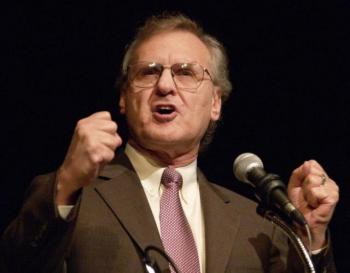 Stephen Lewis, a former Canadian ambassador to the United Nations who has also served at the world agency in several other prominent postings, says the international organization must accept responsibility for the cholera epidemic that broke out in Haiti in October 2010. He says he supports the legal action against the UN that was formally launched in New York City on October 9 on behalf of the victims of the epidemic.

Lewis spelled out strongly-held views in a nine-minute interview on the national, Saturday morning newsmagazine of CBC Radio One, Day 6 on October 12.

The CBC host began the interview by asking Lewis whether he supports the action. He replied, “I do. I think it is unequivocal, the responsibility of the United Nations for the cholera outbreak.”

Lewis dismissed suggestions that definitive proof of the origin of Haiti’s cholera epidemic has not been established. The disease was not present in modern Haiti before October 2010. The epidemic, he said, “has been traced definitively to the Nepalese peacekeeping force” of the UN military mission in Haiti termed MINUSTAH.

Even the UN’s own study on the matter, he said, “came within a hair’s breath of saying ‘we were responsible’, and in fact, the independent investigations by scientists show there is no question of the origin of the cholera”.

Lewis accuses the world body of hiding behind the Convention on the Privileges and Immunities of the United Nations. It was adopted by the fledgling agency way back in 1946. He explained that the convention is “clear” in providing for a lifting of immunity in cases where the UN secretary-general concludes that it interferes with justice. Moreover, says Lewis, the convention specifically states that the secretary-general has a “duty” in such cases to pursue justice for victims of wrongdoing.

A lifting of immunity in the case of Haiti would be a “very significant precedent”, says Lewis, because it would apply to the world body itself, not simply to individuals working in its name.

Lewis explained that he worked for a lengthy period at UNICEF and learned, “to my amazement, that the UN was immune to everything.”

“Even a charge of sexual molestation had to go through endless approaches before you could get justice.”

He noted that the UN does not test for cholera the soldiers it sends on missions in its name and then asked, “How is that possible?”

Lewis agreed with the host that legal protection for the UN and those working under its authority has a place, but “it should not be universal”. And what is so galling about the case of Haiti, he says, is that the UN will not even agree to establish a commission of inquiry that would seek a rapprochement between the contesting parties.

The Day 6 interview began with several quotes from one of the lead attorneys of the legal action, Beatrice Lindstrom of the Boston-based Institute for Justice and Democracy in Haiti (IJDH).

In November 2011, the IJDH, its partner office in Port au Prince, the Bureau des avocats internationaux (BAI—Office of International Lawyers) and a legal firm in Miami filed claims with the UN on behalf of 5,000 Haitian victims of cholera, seeking remedies and the establishment of a commission of inquiry. The UN avoided the claim until February 2013, when it refused to receive the claims, saying they were "not receivable" because doing so would "require a review of political or policy matters".

Among those critical of UN actions in the matter are members of the U.S. Congress and the editors of the New York Times (March 17 and October 12, 2013) and Washington Post. In two extraordinary editorials in August, 2013, the Post editors directly challenged the UN’s refusal to accept responsibility for the cholera epidemic in Haiti.

Navi Pillay, United Nations High Commissioner for Human Rights, is also supporting the call for compensation to the victims of cholera. Speaking at the annual Martin Ennals (human rights) Awards ceremony on Oct 8 in Geneva, she said, "And let me pause here to reflect on some of the work that Mario Joseph [director of the BAI, one of three nominees for the award this year] has been doing on claiming reparations for victims of cholera in Haiti.  And let me say to you, I have used my voice both inside the United Nations and outside to call for the right…for an investigation by the United Nations, by the country concerned, and I still stand by the call that victims…those who suffered as a result of that cholera be provided with compensation."

Stephen Lewis is the first prominent Canadian to date to acknowledge and support the legal action against the UN over cholera in Haiti. He is the board chair of the Stephen Lewis Foundation, Distinguished Visiting Professor at Ryerson University in Toronto and a co-founder and co-director of AIDS-Free World in the United States. His work with the United Nations spanned more than two decades. He was the UN Secretary-General’s Special Envoy for HIV/AIDS in Africa from June 2001 until the end of 2006. From 1995 to 1999, Mr. Lewis was Deputy Executive Director of UNICEF at the organization’s global headquarters in New York. From 1984 through 1988, he was Canada’s Ambassador to the United Nations.

Roger Annis is a coordinator of the Canada Haiti Action Network. He lives in Vancouver BC. The network can be reached at canadahaiti(at)gmail.com or by phone at 778 858 5179.