Strike over new transport taxes brings Haiti to a halt 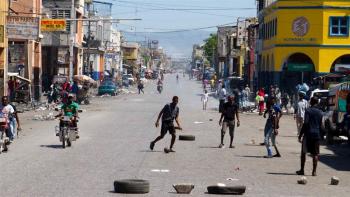 The strike forced many shops and schools to close as employees and students could not get to work or class. [Dieu Nalio/AP Photo]

Much of Haiti has come to a halt because of a transportation strike over new taxes proposed by the government.

Most Haitians do not have private cars, and they get around on motorcycle taxis or the often elaborately painted vans and trucks known as "tap taps". But none were available on Monday as drivers took part in a strike over driver's licenses, fuel and property, among other things.

"We don't want this budget [new taxes] to pass," one protester in the capital Port-au-Prince told The Associated Press. "We don't want it."

Another protester, Eddy Edouard, said he supported the strike "100 percent because the situation is tough for us".

President Jovenel Moise was out of the country to attend the UN General Assembly but has said the money will go back to the public in the form of services and new infrastructure.

Last week, protesters brought parts of Port-au-Prince to a standstill to protest the government's budget plans. The demonstrations, at times, turned violent.

"These little thieves in parliament voted for this budget to help the government exploit the people," protester Marco Paul Delva, who stood by a barricade of flaming tires near the legislature, told AFP news agency.

Traffic in the centre of Port-au-Prince and on key routes around the city grounded to a halt after protesters threw stones and tires across roads.

Although demonstrators gathered in relatively small groups, the protest took police by surprise - and they were unable to intervene in some blocked-off areas.

Protesters directed their anger towards politicians who approved an unpopular budget earlier this month that raises taxes on products including cigarettes, alcohol and passports.

"The revolution has just started. Jovenel Moise will have to retract his taxes, or he will have to leave immediately," Jacques Menard, a 31-year-old protester, told Reuters news agency.

"And this is a warning because the next phase can be very violent."

At the same time, foreign aid to Haiti is slowing. The country is one of the poorest in the Americas and suffered a devastating earthquake in 2010 and the worst of Hurricane Matthew last year.

"If Jovenel Moise is intelligent, he should refrain from publishing the budget; otherwise he will have to face a series of street demonstrations that will further complicate the situation," former presidential candidate Jean-Charles Moise said on local radio last week.

The government has defended the budget, saying that many of the things protesters are unhappy with are untrue.