The Summit of the Americas was an embarrassment for Trudeau 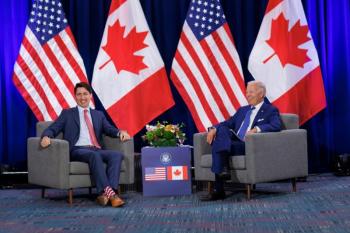 Prime Minister Justin Trudeau and US President Joe Biden meet at the ninth Summit of the Americas in Los Angeles, June 9, 2022. Photo from Twitter.

This year’s Summit of the Americas (SOA), held earlier in June in Los Angeles, might more suitably have been called the Summit of Some of the Americas because of the absence of representatives from four countries: Cuba, Mexico, Venezuela, and Nicaragua. When the Biden administration made clear that the governments of Cuba, Nicaragua, and Venezuela would not be invited, Mexican president Andrés Manuel López Obrador (AMLO) said that he would boycott the summit as a result. He went on to denounce the US blockade of Cuba as a “type of genocide” and “tremendous violation of human rights.”

Trying to diplomatically isolate Cuba, Nicaragua, and Venezuela is part of Washington’s attempt to bring about the overthrow of the governments of these countries, an effort the US has intensified recently. Juan González, Deputy Assistant Secretary of State for Western Hemisphere Affairs at the White House, said that sanctions applied to Russia following its invasion of Ukraine are intended to also affect Cubans, Nicaraguans, and Venezuelans: the sanctions, he told Voz de América, “will have an impact on those countries that have economic affiliations with Russia, and that is by design. Venezuela is going to start to feel that pressure, Nicaragua is going to feel that pressure, just like Cuba.”

AMLO is absolutely right that the Cuban blockade is a “tremendous violation of human rights.” In 2018, the United Nations said that the blockade had cost Cuba $130 billion and matters have gotten worse since then. As Cuba scholar Helen Yaffe points out, the Trump administration added more than 50 sanctions against Cuba during the COVID-19 pandemic, including:

return[ing] Cuba to the list of state sponsors of terrorism just days before leaving office, immediately qualifying Cuba as “high risk” for international banks and investors. Few international banks will now transact with Cuba for fear of [the US Treasury’s Office of Foreign Assets Control] fines. This hugely complicates normal commerce; even humanitarian donations are obstructed. Reneging on his campaign promise to reverse these measures, President Biden has added sanctions of his own.

The US’s economic wars against Nicaragua and Venezuela are also “tremendous violation[s] of human rights.” Sanctions against Nicaragua “have hit specific projects benefiting poor communities [and] have also begun to impact mainstream services such as health care, where replacing defective equipment or obtaining supplies during the pandemic has proven to be problematic.” As for Venezuela, American economists Mark Weisbrot and Jeffrey Sachs “find that the sanctions have inflicted, and increasingly inflict, very serious harm to human life and health, including an estimated more than 40,000 deaths from 2017–2018.”

The peoples of the Americas are also poorer for the US’s exclusions. Prior to the summit, the US State Department said that “People, institutions, and governments across our hemisphere have shared with us their priorities and concerns, and these include the COVID-19 pandemic and the cracks it exposed in health, economic, educational, and social systems.” If the SOA were genuinely interested in being a forum for filling cracks in health care, it would invite Cuba, one of the world leaders in this regard. The island, for instance, has a better rate of infant mortality than the US and Canada (and nearly every other state in the Americas), according to the CIA World Factbook’s most recent available data. Ditto education, as Cuba is “the only [state] in Latin America to meet all of the [United Nations’] Education for All (EFA) objectives set in the year 2000.” The same applies to climate change, which the SOA claimed was a focus of the 2022 summit. Jason Hickel, an academic at the University of London, ranks Cuba first on the Sustainable Development Index—a measure of the ecological efficiency of human development—and puts the US in 159th place. The Chavista government in Venezuela may have brought the SOA some useful insights as well considering that, prior to the sharp escalation in the imperialist economic war against the country, Chavismo had dramatically reduced inequality in such areas as malnutrition and literacy while also making gains against racism in the nation.

Prime Minister Trudeau should have followed AMLO’s lead. Canadians ought to demand that Trudeau, and any subsequent prime ministers, engage in active blockade-breaking and boycott any future SOAs that exclude Cuba, Nicaragua, or Venezuela, or any combination of the three. Such measures could benefit both the peoples of each of these countries and the rest of the hemisphere.

Greg Shupak writes fiction and political analysis and teaches Media Studies and English at the University of Guelph-Humber. He’s the author of The Wrong Story: Palestine, Israel and the Media. He writes a monthly column with Canadian Dimension and his work frequently appears in outlets like Electronic Intifada, F.A.I.R, The Guardian, In These Times, Jacobin, and The Nation.