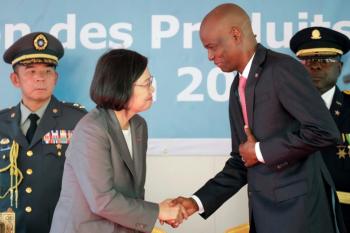 “Taiwan is a loyal friend and partner to Haiti, and we will accompany Haiti on its road toward development,” said Tsai, who visited the National Palace and the Museum of the National Pantheon (MUPANAH), as well as a hapless Taiwan trade fair organized by Taiwan’s Foreign Affairs Ministry and the Taiwan External Trade Development Council (TAITRA) in Port-au-Prince.

But her words were almost as perfunctory and ineffectual as the would-be aid Taiwan is providing: a mere $150 million loan for an electrification project to build regional micro grids and new and renovated substations.

However, the project isn’t going anywhere. The Haitian Parliament hasn’t yet approved it. Many Haitian legislators are eyeing the fantastic developments next door in the Dominican Republic, which forsook the Republic of China (as Taiwan calls itself) to establish diplomatic and economic relations with China in May 2018. Since then, China has offered the DR some $3 billion in loans and integration into its globe-spanning “One Belt, One Road” Initiative, which is bringing infrastructure development and investment to 152 countries and international organizations in Asia, Europe, Africa, the Middle East, and the Americas.

Meanwhile, China has offered Haiti $4.7 billion to completely overhaul the tangled and crumbling infrastructure of the capital, Port-au-Prince.

Haiti is one of only 16 countries (17 if one counts the Vatican’s Holy See), out of 195 worldwide, which recognize the Republic of China instead of China proper. Only five of the countries have a population over two million.

Taiwan is an island province of China which broke away when the dictator Chiang Kai-shek fled there after the 1949 Chinese revolution. Ever since, Taiwan has been a virtual client-state and protectorate of the United States. Washington’s subversion of China’s determination to reintegrate Taiwan could end up being one of the sparks that ignites World War III.

In May 2018, Jovenel Moïse led a 30-person delegation for a week-long visit to Taiwan. He returned all but empty-handed. Taiwan maintains its grip on its allies through small, strategic bribery rather than grand projects.

Tsai’s visit to Haiti was extremely brief probably because security in the capital is so bad and President Moïse is so politically toxic. Almost weekly, large demonstrations rock Port-au-Prince and other cities demanding his resignation. Even his former political allies, epitomized by Sen. Youri Latortue, are deserting him to join the opposition.

THE TRUMP ADMINISTRATION HAS DRAMATICALLY INCREASED U.S. AID, COURTSHIP, AND DIALOGUE WITH TAIWAN

In contrast to her four-hour visit to Haiti (population 11 million), Tsai next made a four-day visit to St. Kitts and Nevis (population about 56,000), another of the 11 micro-nations which diplomatically recognize Taiwan. Her 12-day tour takes her also to St. Vincent and the Grenadines, and St. Lucia.

Although Washington has recognized China since 1971, the Trump administration has dramatically increased U.S. aid, courtship, and dialogue with Taiwan, a figurative finger in China’s eye. Tsai’s latest trip has been particularly provocative.

“The U.S. government has been letting Taiwanese leaders stop over [on U.S. soil] since the 1990s… a couple of times a year when they were on their way to see formal diplomatic allies in Latin America or elsewhere,” explained the Los Angeles Times’ Ralph Jennings. “But the locations, time frames, and activities allowed regarding those landings have been a barometer both of U.S.-Taiwan relations and how the two sides regard China at any given moment. Keen to build economic ties with China, Presidents Clinton, George W. Bush and Obama would often restrict stops to distant spots such as Anchorage or Guam, sometimes just for hours rather than days.”

But these days, with a trade war raging and hostilities growing, “the U.S. government isn’t trying to hide such visits. On Thu. [Jul. 11], Taiwan President Tsai Ing-wen arrived in New York for two days. Later this month, she is scheduled to pass through Denver for two more days,” Jennings wrote.

Add to this that Washington is this year selling $2.2 billion worth of advanced weapons to Taiwan including 108 General Dynamics Corp M1A2T Abrams tanks and 250 Stinger missiles. This is akin to China selling Texas vast amounts of arms if it were to secede from the United States.

So while “Washington remains [Taiwan’s] most powerful unofficial ally and biggest arms supplier,” writes the Agence France Presse, it has also “pressured Haiti to maintain its relationship with Taipei.”

However Tsai, with her delegation including three parliament members, the president of the private business sector association, and Taiwanese entrepreneurs, apparently felt it prudent to visit Haiti as briefly as possible.

Rather than reinforcing Jovenel Moïse, her lightening visit may have only helped to underscore Moïse’s growing weakness, fragility, and unpopularity.