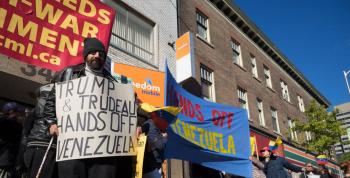 In the span of only few months, the Canadian government has issued at least 14 statements aimed at undermining the democratically-elected government of Nicolas Maduro in Venezuela.

The latest statement, issued on October 17 by the Global Affairs Canada, was a deliberate attempt to cast doubt on the results of the October 15 regional elections, which saw the ruling United Socialist Party of Venezuela win a majority of 18 out of 23 governorships, with 54 per cent of the votes.

After the results were announced, the Venezuelan opposition predictably cried fraud, as they have after nearly every election in the country, with the only exceptions being the elections where the opposition won.

Echoing the baseless allegations made by both the opposition and the Trump regime in the United States, Foreign Affairs Minister Chrystia Freeland said the "elections were characterized by many irregularities that raise significant and credible concerns regarding the validity of the results."

However, neither the opposition nor the Canadian government has been able to provide any proof that the elections were fraudulent.

When contacted, Global Affairs Canada did not provide any evidence to back their claim that any alleged irregularities were significant enough to undermine the results.

Meanwhile, international electoral observers with the The Latin American Council of Electoral Experts, known as CEELA, were unambiguous in their statements, affirming the legitimacy of the vote.

"The vote took place peacefully and without problems… the vote reflects the will of citizens," said CEELA President Nicanor Moscoso during a press conference Monday.

Venezuela's voting system is robust and virtually impossible to circumvent. Voters must present their voting credentials and have their fingerprints scanned before the electronic machine allows them to cast their ballot. After indicating their preference, a paper ballot is produced and deposited in a secure receptacle, their finger is then stained with indelible ink as an added security measure to ensure no one can cast more than one vote.

Mainstream outlets framed the result as a surprise, pointing to opinion polls that suggested the opposition was set to secure a resounding victory. However, polling throughout Latin America, and particularly in Venezuela, is infamously unreliable.

The election results have left the notoriously divided opposition even further divided. While some continue to cry fraud, others have castigated their colleagues for their strategy. Over the past year, the opposition pursued an "insurrection" ­with violent street protests that left over a hundred dead. This strategy ultimately failed to oust the Maduro government and left the opposition and their supporters exhausted and demoralized. Some elements chose to freely participate, while others called for abstention.

Opposition leader Henry Ramos Allup conceded that the abstention of their supporters cost them many votes and ultimately many of the governorships. In an opinion piece for the Washington Post, opposition supporter Francisco Toro was forced to begrudgingly accept that the election results were indeed accurate.

Some nonetheless maintain that the election was fraudulent, pointing to "irregularities" such as the relocation of 201 polling centres. These polling centres were moved as a result of violence during Constituent Assembly elections in July, and comprised less than two percent of the 13,559 polling stations throughout the country. International observers have noted that other complaints, such as the late opening of some polling centres, ultimately had no impact on the result.

So why does the Canadian government maintain that these alleged irregularities were sufficient enough to lead them to question the legitimacy of the vote? Canada's position can be explained by their ideological drive to pursue regime change in Venezuela.

Under the leadership of Foreign Affairs Minister Chrystia Freeland, the Canadian government of Justin Trudeau has been a major player in the Lima Group, comprised of governments in the region who oppose the Maduro government. The Lima Group was only formed after these same governments failed to achieve consensus at the Organization of American States, despite the fact that the body is lead by Luis Almagro, who has taken a hardline stance against the Venezuelan government. The Lima Group has been criticized for undermining regional integration efforts and the work of the UNASUR, which has been working to promote dialogue in Venezuela.

In a statement issued after the regional elections, the Lima Group also questioned the legitimacy of the vote and called for an audit of the results. President Maduro has expressed his support for a full audit of the elections.

Global Affairs Canada also refused to say whether they would recognize the results if the audit showed that the election results were indeed a reflection of the will of the Venezuelan people.

Canada is set to host the next gathering of the Lima Group in Toronto and Global Affairs Canada is the sponsor of a panel talk by the Canadian Council for the Americas that features a veritable who's who of opponents of the Venezuelan government. The event is also supported by several Canadian mining companies who are interested in once again exploiting Venezuela's natural resources, revealing the deep collusion between the Canadian state and Canadian mining interests abroad.