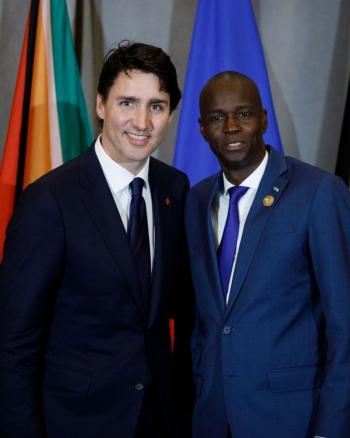 The Trudeau Liberals are attempting to “feminize” their support of an illegitimate government hated by the vast majority of Haitians. And Radio-Canada seems to have fallen for it.

After Radio-Canada published a story about nine of eighteen ministers in Jovenel Moïse’s newly proposed government being women, Haitian Canadian feminist Jennie-Laure Sully replied, “Haitians of all social classes have been demonstrating for more than a year demanding the resignation of the president and a change in the political system. But what does Radio-Canada talk about in this country? A cosmetic measure adopted by this fraudulently elected government accused of embezzlement and human rights violations. Gender parity in such conditions is a smokescreen (“poudre aux yeux”). Radio-Canada is doing identity politics of the lowest order while ignoring Canada’s role in maintaining corruption in Haiti.”

With little support among Haitians, Moïse needs good press in the two main countries sustaining his presidency. Recently he has been on a campaign to shore up his image in the US, publishing an op-ed in the Miami Herald and hiring a new Washington, DC, based lobbyist.

In presenting a gender balanced cabinet Moïse’s proposed Prime Minister, Fritz William Michel, deftly aligned with a stated foreign policy objective of Justin Trudeau. Along with praise for Moïse, Global Affairs Canada’s webpage about “Canada’s international assistance in Haiti” focusses on gender equity. At the top of the page, it lists a series of feminist goals under the heading of “To strengthen Haiti’s Government capacity to respond to gender equality issues.”

(In 2017 the Trudeau government launched a much-hyped Feminist International Assistance Policy, but their commitment to feminist internationalism is paper-thin. Since July 21, for instance, Ottawa joined Washington as the only country to vote against a UN Economic and Social Council resolution stating, “the Israeli occupation remains a major obstacle for Palestinian women and girls with regard to the fulfillment of their rights”; Canada signed a Memorandum of Understanding with the misogynist UAE; the Trudeau government was criticized by the chair of the UN Working Group on Business and Human Rights Surya Deva for gutting their promise to rein in Canadian mining abuses abroad, which disproportionately affect women.)

Moïse has faced massive popular protests in recent months, including multiple general strikes. As I detail here and here, the only reason he remains in power is because of support from Washington, Ottawa and a number of other countries. Canada has provided financial, policing and diplomatic support to the unpopular government. In the latest indication of diplomatic backing, Canada’s ambassador in Port-au-Prince, André Frenette, met Moïse to discuss “bilateral cooperation” two weeks ago. The embassy also continues to support a police force responsible for countless abuses. On Sunday Global Affairs Canada’s Haïti account tweeted“congratulations” to police graduates who they trained in collaboration with the US.

On July 15 Solidarité Québec-Haïti #Petrochallenge 2019 activists interrupted a press conference by Minister of La Francophonie and Tourism Mélanie Joly to call on the Trudeau government to stop propping up a corrupt, illegitimate and murderous Haitian president. As this video shows, Joly was unable to respond to our simple question.

While the disruption was reported on by various media outlets, Radio Canada wasn’t interested. More than any other major media outlet, the French language public broadcaster has been the mouthpiece for Canadian imperialism in Haiti over the past 15 years. Unlike other outlets, Radio Canada covers Haitian affairs fairly regularly. But, it is almost entirely from the perspective of ‘Ottawa/Canada doing good’ in the impoverished nation.

When active with Haiti Action Montréal in the mid 2000s I experienced the politicized nature of the subject at Radio Canada. I called the news editor to inquire if they’d received our press release and instead of a yes/no we might/we can’t send anyone to cover the event that is usually part of this type of media outreach, the news editor somewhat angrily accused me of being an Aristide supporter, which was odd both because the event was focused on Canada’s role in Haiti and Aristide was elected by the country’s historically excluded.

In a 2008 article titled “Embedding CBC Reporters in Haiti’s Elitist Media” Richard Sanders describes Radio Canada’s participation in a Canadian government funded project to support media outlets that were part of L’Association Nationale des Médias Haïtiens (ANMH), which officially joined the Group of 184 that campaigned to oust Aristide. Sanders writes about Québec journalists sent to “train” Haitian reporters for a month, but who were in fact being “submerged in the propaganda campaigns of Haiti’s elite media.” Assistant program director for Radio Canada news, Guy Filion was one of the reporters who interned with ANMH. Even though ANMH outlets barred Haiti’s elected president from its airwaves in the lead-up to the coup, Filion described those who “formed the ANMH” as “pro-Haitian and they are pro neutral journalistic people … as much as it can be said in this country.” Filion also praised the media’s coverage of the 2006 election in which Aristide’s Lavalas was excluded. In a coded reference to Aristide supporters, Filion noted, “even thugs from [large slum neighbourhood] Cité Soleil were giving interviews on television!”

Radio-Canada’s reporting on gender parity in a proposed new government helps legitimate Trudeau’s support of Moïse. It puts a progressive veneer on a corrupt, repressive and unpopular president who is dependent upon Radio-Canada’s patron. It is yet another attempt to justify Canadian policy that sides with the interests of multinational corporations and a small elite over the needs of Haiti’s impoverished majority.