Trudeau government betrays Cuba and Canadians at the United Nations 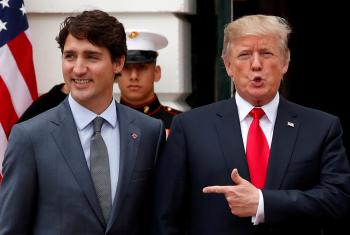 Traditionally, Canada has spoken out once a year in the United Nations.

However, in 2019 at the UN General Assembly, Canada’s Address to the 74th Session of the United Nations General Assembly delivered by Ambassador Marc-André Blanchard had only this to say: Against Venezuela (wink to Trump), and nothing on Cuba, another wink to the US? Here it is:

Blanchard: “Nowhere is the need more urgent than in those places where fragility and violence directly affect millions of people. The General Assembly knows very well where political solutions are desperately needed to stop mass atrocities and to bring durable solutions to protracted crises so generations of people can return, in safety and dignity, to their homes, so they can have hope and prosper and thrive. People in Syria, Yemen, Venezuela and countless other places rightly look to the blue-and-white flag of the United Nations with hope, but, too often, also with frustration and even anger.”

Furthermore, at the UN Virtual General Assembly in September 2020, the following countries, in their respective addresses, are among those that called out the US for its blockade against Cuba:

On September 21, Justin Trudeau also virtually addressed the UN General Assembly. However, he did not raise Cuba. It is true that this fall the traditional debate and vote on the Cuban resolution to lift the blockade was postponed to another date when presumably the UN can physically meet.

On this occasion, Canada traditionally would speak out. However, what stopped Justin Trudeau from speaking out for Cuba now (in September), as many other countries have done? This is a legitimate question especially at a time when the Trump Administration is drastically increasing its measures to tighten the blockade during the epidemic, to the tune of close to one per week on the average?

Here is Justin Trudeau’s address to the UN General Assembly on September 21.

To help fight the COVID-19 crisis, Cuba has sent doctor brigades to multiple countries in the world, including Italy. They have practiced an internationalist foreign policy which promotes the common interests of humanity. In response, the Canadian government, in alignment with Trump’s anti-medical brigade policy, has refused to allow Cuban doctors to help First Nations in need of assistance. Most importantly, it has refused to stand up to the imperialist blockade of Cuba. Placing a knife in Cuba’s back, how typical of this Trudeau government.