Trudeau government’s purchase of F-35 warplanes may be imminent 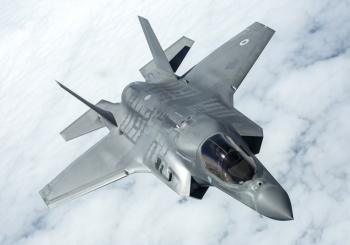 According to a report published on December 18 by Global News, after years of delays, Canada is set to finalize a contract to replace its aging fleet of CF-18 fighter jets in the “very short term.”

According to Defence Minister Anita Anand, “We will be concluding that contract in the very short term and moving to ensure that the assets arrive as soon as possible.”

The article continues: “[Justin] Trudeau’s government appears to be on the cusp of signing a contract for the fleet they promised not to purchase in 2015.”

The Liberal leader’s Real Change platform that year stated in bold: “We will not buy the F-35 stealth fighter-bomber.” It then noted: “The primary mission of our fighter aircraft should remain the defence of North America, not stealth first-strike capability. We will reduce the procurement budget for replacing the CF-18s, and will instead purchase one of the many, lower-priced options that better match Canada’s defence needs.”

Just two days ago, La Presse also reported that the Trudeau government had set itself the goal of reaching a formal agreement by the end of December.

While La Presse says the negotiations may not be concluded until early 2023, Anand tells the paper news is coming “soon.”

That article also notes that the Department of Public Services and Procurement has been cautious about the status of negotiations with Lockheed Martin, the US-based manufacturer of the stealth multirole combat aircraft, and is refusing to specify a timeline.

This past week, Skies Magazine also reported: “It is currently anticipated that contracts for Canada’s acquisition of 88 F-35 jets are to be signed by the end of this year, or early 2023, with the first delivery slated for 2025.”

With respect to the cost, that website says that, “Canada’s defence policy, Strong, Secure, Engaged estimates the acquisition of the aircraft, associated equipment and setup to enable entry into service will cost $15-19 billion.”

However, the federal government has not publicly stated how much the fighter jet will cost over its expected 30-year lifespan.

In June of this year, Anne Ngoh Ngando of the Office of the Parliamentary Budget Officer stated: “At this time, we are not currently planning any further analysis [beyond their March 2011 fiscal report] of the F-35.”

That study (published at a time when the government said it would purchase 65 F-35s for $9 billion) concluded: “Relying on historical trends and applicable cost drivers, the PBO was able to forecast a total ownership cost of approximately US$ 29.3 billion for the 65 aircraft over a 30-year period. This includes both acquisition and long-term sustainment costs and reflects a 75% confidence interval.”

But in their September 2022 study, the No Fighter Jet Coalition estimated the lifecycle cost of 88 F-35s to be $76.8 billion (including the $19 billion acquisition cost).

And with the news of this imminent contract coming just weeks after the COP27 summit concluded in Egypt, we also note that the Government of Canada has not disclosed any figures in relation to the projected greenhouse gas emissions from these warplanes.

Peace Brigades International-Canada continue to express our concerns about the consequences and lack of information about the purchase and use of these warplanes.

Anand’s statement also come just days after the Washington Post reported that a US Navy pilot ejected from a fighter jet after a “bizarre slow-moving crash at Naval Air Station Joint Reserve Base in Fort Worth.”

Brent Patterson is a political activist, writer and the executive director of Peace Brigades International-Canada. He lives in Ottawa on the traditional, unceded and unsurrendered territories of the Algonquin Nation.