Trudeau’s government has tried, and failed, to roll back the pink tide 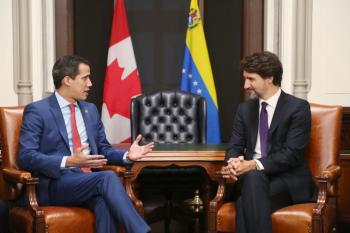 From the beginning of his time in office, Trudeau has launched attacks on what remains of the left-wing governments that came to power in Latin America over the course of the past two decades. His party has supported the overthrow of leftist governments in Venezuela, Nicaragua, and Bolivia. But socialists remain in power in Venezuela, and leftists in the region have won a series of national elections. Progressive forces have defeated right-wing politicians in Honduras, Peru, Bolivia, and elsewhere. The push for regional integration is being rekindled.

Recently, the Community of Latin American and Caribbean States (CELAC) met in Argentina. Other than the United States and Canada, every single country in the hemisphere is a member of CELAC. Thirty-three of the bloc’s thirty-four nations were represented in Buenos Aires. Brazil’s Jair Bolsonaro was absent.

CELAC was founded in 2011 in Caracas, Venezuela, and immediately received plaudits from left-wing leaders such as Hugo Chávez, Rafael Correa, and Luiz Inácio Lula da Silva. Canada’s government is not alone in its hostility to the regional bloc, which many governments in the Global North would like to see replaced with the US-dominated Organization of American States (OAS). But it is precisely the overreach of the OAS that prompted the development of CELAC.

Allan Culham, Canada’s special advisor on Venezuela and former ambassador to Venezuela, El Salvador, Guatemala, and the OAS, has publicly denounced the diplomatic forum. In a 2016 Senate Foreign Affairs Committee discussion of Argentina, Culham stated that

CELAC is not a positive organization within the Americas. Mainly because it’s built on the principle of exclusion. It purposefully excludes Canada and United States. It was the product of President Chavez and the Chavista Bolivarian revolution.

Culham was correct in observing that CELAC’s exclusion of Canada and the United States is intentional. What he failed to mention is that this exclusion is a response to decades of imperialistic plunder and political interference from the two nations.

They Do Anti-Bolivarianism in Different Voices

In 2017, the Liberals brought Culham out of retirement to coordinate Canada’s “regime change” efforts in Venezuela. Over the past five years, Ottawa has done its best to isolate Caracas — imposing sanctions; referring the Venezuelan government to the International Criminal Court; financing often unsavory Venezuelan opposition parties; and deciding that a marginal opposition politician was the country’s legitimate president. Canada’s campaign, which has proved devastating for Venezuelans, has failed. Nicolás Maduro and the United Socialist Party of Venezuela are stronger today than at any point since opposition politician Juan Guaidó declared himself president three years ago.

The Lima Group, launched by Canada and Peru in 2017 as an ad hoc coalition of countries seeking to overthrow the Venezuelan government, has not met for over a year. The organization is effectively dead. After Pedro Castillo, a left-wing politician, won the presidential election in the summer, Peruvian foreign affairs minister Héctor Béjar called the Lima Group the “most disastrous thing we have done in international politics in the history of Peru.”

A half dozen countries have withdrawn from the Lima Group. Popular protests across the region have weakened many other member country’s commitments to the group’s party. Argentina withdrew after Alberto Fernández and Cristina Kirchner won the October 2019 election against Mauricio Macri. The wealthy businessman was handily defeated in a presidential election CBC labeled “a loss for the Trudeau government.”

Meanwhile, Ottawa actively backed the ouster of Bolivia’s first-ever indigenous president, providing significant support for the OAS’s effort to discredit Evo Morales’s 2019 election. This in turn fueled opposition protests that served as justification for the coup. Protests by social movements would, however, force the coup government to hold another election, handing Morales’s Movimiento al Socialismo a second win. This turn of events greatly discredited the OAS and other coup supporters.

As an alliance of wealthy white supremacists, Christian extremists, and North American interlopers overplayed its hand in Bolivia, Trudeau’s anti-socialist ally in Chile was weakened by a popular uprising. Two weeks into the October 2019 demonstrations against Sebastián Piñera’s government, Trudeau held a phone conversation with the remarkably unpopular president, who had just sent the Chilean Army into the streets. At the time of the call, nineteen people had already died — and dozens more were seriously injured — in protests that began against a hike in transit fares and morphed into a broader challenge to economic inequality.

According to a published report of the conversation between the two premiers, Trudeau criticized “election irregularities in Bolivia” — used to justify removing Morales — and discussed the campaign to remove Venezuela’s president. A Canadian Press story noted that “a summary from the Prime Minister’s Office of Trudeau’s phone call with Piñera made no direct mention of the ongoing turmoil in Chile, a thriving country with which Canada has negotiated a free trade agreement.”

The Liberals may have stayed quiet on the fiercest repression in Chile since Augusto Pinochet, but the popular uprising the crackdown was supposed to squash was significant enough to force the Chilean government to organize a referendum on reforming the dictatorship’s neoliberal constitution. Last month, leftist Gabriel Boric won the Chilean presidency by a significant margin.

Inspired by their Chilean counterparts, protesters put far-right Colombian president Iván Duque on the back foot in late 2019. After Duque won a close election, then minister of foreign affairs Chrystia Freeland congratulated him and said, “Canada and Colombia share a commitment to democracy and human rights.”

In August 2018, Trudeau tweeted, “Today, Colombia’s new President, Ivan Duque, took office and joins Swedish PM, Norway PM, Emmanuel Macron, Pedro Sánchez, and others with a gender-equal cabinet. Iván, I look forward to working with you and your entire team.”

A month later he added, “Thanks to President Ivan Duque for a great first meeting at UNGA this afternoon, focused on growing our economies, addressing the crisis in Venezuela, and strengthening the friendship between Canada & Colombia.”

Sadly for Trudeau, convivial overtures of this sort may soon fall on deaf ears. In what could upend decades of right-wing-dominated Colombian national politics, leftist candidate Gustavo Petro is leading polls for the May presidential election.

Attempts to Turn the Pink Tide by Hook or by Crook

In November of last year, Daniel Ortega was reelected president of Nicaragua. Two years ago, Ottawa severed aid and sanctioned officials from Nicaragua, the government of which former US national security adviser John Bolton listed as part of a “troika of tyranny” (along with Venezuela and Cuba). While there is an authoritarian streak to Ortega’s politics, his government is part of the Venezuela-led Bolivarian Alliance for the Peoples of our America (ALBA). The alliance developed in response to North American domination of the hemisphere.

Six weeks ago, Canada’s Lima Group ally in Honduras fell when Xiomara Castro won the presidency. In 2017, Freeland was quick to recognize Juan Orlando Hernández after he defied the Honduran constitution by running for a second term as president and then brazenly stole the election.

Castro is the wife of former president Manuel Zelaya, who was removed by the military, in 2009, on the grounds that he was seeking to defy the constitution by running for a second term. In fact, the social democratic president, who had recently joined ALBA, simply put forward a plan to hold a nonbinding public poll on whether to hold consultations to reopen the constitution.

Backed by Ottawa and Washington, the move against Zelaya was the beginning of a series of unconstitutional, or quasi-constitutional, coups that played an important role in reversing Latin America’s “Pink Tide.” In June 2012, the left-leaning president of Paraguay, Fernando Lugo, was ousted in what some called a parliamentary coup. A few years later, Ecuador swung to the right when Rafael Correa’s former vice president, Lenín Moreno, won the presidency — with Correa’s backing. Moreno then carried out a stunning political about-face, forcing Correa out of the country and blocking his party from elections.

Most significant for the geopolitics of the region, Brazilian Workers’ Party president Dilma Rousseff was impeached through a “soft coup” in 2016. A little more than a year into her second four-year term, parliamentarians voted Rousseff out after finding her guilty of breaking Brazil’s budget laws. The impeachment was sparked by an economic downturn and the massive “car wash” corruption probe that targeted various politicians, including her Workers’ Party predecessor Lula da Silva.

There was no evidence Rousseff was corrupt, and the case against former president Lula was flimsy. The lead prosecutor, Sérgio Moro, who under the Brazilian system also acts as a judge, later became justice minister in the Jair Bolsonaro government. In 2019, the Intercept released a trove of communications from Moro, confirming the political nature of the charges against Lula, which had also been used to weaken Rousseff prior to her impeachment.

While they made dozens of statements criticizing irregularities in Venezuela, the Trudeau government remained silent about the equally murky impeachment of Rousseff, and was unfazed by the persecution of the Left more broadly.

Canada began negotiations to join the Brazilian-led MERCOSUR trade bloc (just after Venezuela was expelled). They also held the Canada-Brazil Strategic Dialogue Partnership. In October 2018, Freeland met her Brazilian counterpart to discuss, among other issues, pressuring the Venezuelan government. She tweeted, “Canada and Brazil enjoy a strong friendship and we are thankful for your support in defending the international rules-based order and holding the Maduro regime in Venezuela to account.” Under Bolsonaro, Brazil would join the Lima Group.

In 2018, the openly sexist, racist, and stridently anti-environmentalist Bolsonaro won the presidential election — largely because the front-runner in the polls was in jail. Former Workers’ Party president Lula da Silva, who ended his second term with an 83 percent approval rating, was blocked from running due to politically motivated corruption charges.

The Trudeau government was publicly silent on Lula’s imprisonment. The night before the Supreme Court was set to determine Lula’s fate, the general in charge of the army hinted at military intervention if the judges ruled in favor of the popular former president. Not even this development was criticized by Ottawa. The courts have since annulled the convictions against Lula and polls suggest he will trounce Bolsonaro in the presidential vote scheduled for October.

After backing numerous failed and dubious contenders, it still remains unlikely that Trudeau’s Liberals will change their Latin American geopolitical strategy. Canada’s policy in the region has long been shaped by Washington and the economic interests of Canadian capitalists. It suits Canada’s banks, mining companies, and other corporations to crush efforts that seek economic and political independence from US empire.

Yves Engler's latest book is Stand on Guard for Whom? — A People’s History of the Canadian Military.