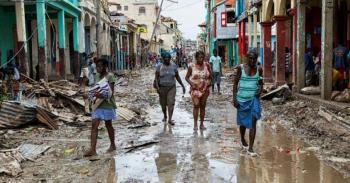 A scene from Les Cayes, Haiti, in the aftermath of Hurricane Matthew, the category 4 storm which made landfall in the country on 4 October 2016. (Photo: UN/Logan Abassi/flickr/cc)

The situation in Puerto Rico remains quite urgent. Damage is still being assessed but there is no water, electricity is offline for at least a month, and hospitals are low on fuel (or already out) for their emergency generators.

Despite the urgency, President Trump stuck by his wealthy friends making money controlling shipping instead of sending emergency aid. Only last Thursday, facing increasing pressure from within his own party, did Trump temporarily suspend the Jones Act allowing for life-saving assistance to arrive. This didn’t stop him from starting a Twitter war in between rounds of golf with Puerto Rican elected officials that earned him the scorn of many.

Beyond Trump’s single-minded focus on the profit motive and apparent disdain for anyone like San Juan Mayor Carmen Yulín Cruz, what could explain this? Nearly half of U.S. citizens polled are apparently unaware that Puerto Rico is a colony of the U.S. and its residents, U.S. citizens. Despite this fact, residents of Puerto Rico cannot vote during presidential elections and do not have representatives in Washington, which may also be part of the calculation of their lives mattering less. Perhaps it is too uncomfortable to acknowledge that the U.S. is an empire.

Anthropologist Yarimar Bonilla points out that the profit motive is exactly what is keeping Puerto Rico in this liminal status: it is a haven for tax-dodgers and those who benefit from cheap labor, since it is exempt from U.S. labor protection laws including the minimum wage, while not paying import duties.

And, as Bonilla and a group of over two hundred scholars points out, this over century-old exploitation and colonialism is deadly. Behind Trump’s callousness is the reality that the inequalities have been deliberately put in place to benefit people like Trump’s friends, whom he bragged about wanting to make money in a fictional country of Nambia.

To put it quickly: colonialism kills.

Over the weekend, the Washington Post praised the U.S. government’s immediate response to the January 12, 2010 earthquake in Haiti, again to point out the current administration’s underwhelming and inadequate response to Puerto Rico.

Especially since Trump is in Puerto Rico, it is unfortunate that the mainstream media’s memory about the international response in Haiti skips over the painfully obvious: far from a success story, the 16-billion-dollar effort was patchy at best, leading to massive corruption, inequality, and radical ruptures of Haitian solidarity, destroying traditional families and even increasing violence against women.

In addition to the high-profile scandal involving the Red Cross, much has been written about the failures of aid: it has been called Fatal Assistance, the Big Truck that Went By, Humanitarian Aftershocks or simply failure. And that is only in the foreign press; local voices have been more specific, nuanced, and critical. Given the inequalities within the world system, with differential access to the Internet and imperial languages, most of these voices aren’t heard outside of Haiti.

There are similarities: in Puerto Rico, as in Haiti, communities banded together in solidarity to help one another survive.

Both Puerto Rico and Haiti, like the rest of the Caribbean, are on front lines of climate change: Maria was the third category-four-or-higher storm in weeks. And as Jessica Hsu and I noted in the last blog, we need to be talking about climate justice: the Caribbean has long been used by colonial capitalist powers for exploitation, beginning in the violent reign of King Sugar, when people who were ripped from their homes and sent as cargo on the most horrifying of voyages to be sold as real estate, worked so hard that the average life expectancy was seven years on the plantation. In their cold, capitalist calculation, sugar planters figured it was cheaper to work their slaves to death than to ensure that people were alive long enough to have and raise children.

But there are important differences: Haiti became nominally independent in 1804, the first slave revolt to lead to independence. This “unthinkable” act left it a pariah state, at the mercy of foreign powers. The U.S. seized Puerto Rico in the Trumped-up Spanish-American War and has exploited it ever since.

So the lessons we learned in the “Republic of NGOs” may not be applicable to Puerto Rico, whom the Federal government owes a complete recovery with dignity.

And maybe because of this fact, or because of the many voices defending Puerto Rico from Twitter to Congress, private aid agencies may be forced to stay on their best behavior.

But for what they’re worth, here are some “New Minimum Standards” inspired by the failures in Haiti:

I hope these standards might be useful to our Puerto Rican neighbors, colleagues, friends, and comrades, and I hope that the Puerto Rican people fare better than the Haitian people did, and are treated with dignity and respect.

Mark Schuller is Associate Professor of at Northern Illinois University and affiliate at the Faculté d’Ethnologie, l’Université d’État d’Haïti. Schuller’s research on NGOs, globalization, disasters, and gender in Haiti has been published in thirty book chapters and peer-reviewed articles. Schuller is the author or co-editor of seven books—including Capitalizing on Catastrophe: Neoliberal Strategies in Disaster Reconstruction; Humanitarian Aftershocks in Haiti—and co-director / co-producer of documentary Poto Mitan: Haitian Women, Pillars of the Global Economy. Recipient of the Margaret Mead Award, Schuller is the board chair of the Lambi Fund of Haiti and active in several solidarity efforts.