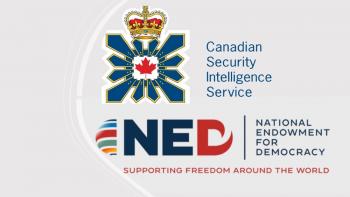 After The Canada Files discovered two new NED funded groups in Canada, an ATIP response letter revealed that the Canadian Security Intelligence Service [CSIS] wants to hide any information it has on NED operations in Canada.

The Canada Files has previously covered the adjacency of the Free Tibet movement in Canada to the National Endowment for Democracy, a CIA-front group. However, that movement isn’t just adjacent to the NED; a prominent organization has taken funds from the NED. That group is the Canada-Tibet Committee [CTC], who took NED funds in at least 2020. Another group, the Raoul Wallenberg Centre for Human Rights [RWCHR] also took NED funds in 2020.

The project the Canada-Tibet Committee took $38k USD in NED funding for was called “Promoting Awareness of Tibetan Human Rights”, with a commitment to “convene a series of regional workshops [in 2020] to build support for stronger legislative and policy action on Tibet in Canada”. The description is a blunt commitment to interfere in Canadian politics, yet again making a mockery of Canadian sovereignty.

Meanwhile the Raoul Wallenberg Centre for Human Rights took $20k in NED funding to run an event in the same year, which promoted “awareness of recent legal scholarship that challenges the People’s Republic of China’s historical claim to Tibet.” RWCHR also worked to “build support for stronger legislative and policy action on Tibet” and increase collaboration “among international parliamentarians on global Tibet initiatives.” The NED description, and RWCHR’s acceptance of this funding description, is laughable insofar that they claim to care about Sino-Tibetan dialogue. This phrasing infers that Tibet is a separate country from China, while the Dalai Lama doesn’t even support Tibet independence.

RWCHR is led by viscerally anti-Palestinian ex-Canadian MP Irwin Cotler, who serves as its International Chair. The Canada Files has written about Cotler on numerous occasions, with articles mainly written by Palestinian and Jewish Unity’s co-director Bruce Katz (Articles: #1, #2, #3).

These funding revelations come after another NED-funded group, Uyghur Rights Advocacy Project, drove a parliamentary subcommittee that led to a unanimous 2021 vote in Canada’s parliament declaring that China was committing a ‘genocide’ against Uygur Muslims. URAP proudly displays its NED funding on its About Us page. URAP is proudly displaying the utter impunity they can act with, as they cripple any remaining elements of Canadian sovereignty.

The Canada-Tibet Committee itself deserves attention. CTC’s Executive Director, Sherap Therchin, was the “Deputy Chief of Tibet Fund India, with responsibility for oversight and evaluation of USAID projects supporting education and healthcare in Tibetan refugee communities.” As noted in this writer’s April 2021 article, “USAID is the regime change arm of the United States government.”

Therchin’s rise to political prominence was drastically accelerated by the “Parliamentary Friends of Tibet Internship Program [PFTIP]”, created by Canadian parliamentarians in 2009. Therchin became a PFTIP summer intern in 2016, and served in Liberal MP Arif Virani’s office. Virani would become Parliamentary Friends of Tibet’s chair in 2017. Therchin would then work “as a proposal consultant for Global Affairs Canada funding, from December 2016 to January 2017.” Therchin was hired as CTC’s Executive Director in January 2018.

William Dere, TCF Advisory Board member, author and leading activist in the two-decade movement for redress of the Chinese Head Tax and Exclusion Act, noted that “it appears that their [CTC] 10-member board of directors are all professional human rights advocates. Four of them appear to be of Tibetan ethnicity. This group seems to be part of the larger human rights industry monetized by the American NED to sow confusion and denial of China’s tremendous progress in economic and social human development in Tibet.”

Dere isn’t surprised in the slightest that a “Free Tibet” organization would take NED funding. He noted that “The history of CIA involvement in Tibet is well documented. After the People’s Liberation Army liberated the people of Tibet from feudalism and slavery in 1951, the CIA instigated a 20-year covert war against China in Tibet. Supplying arms, training, and money to the former Tibetan elite like the 2 elder brothers of the Dalai Lama, an armed insurrection took place in 1957 to restore feudalism and separate Tibet from China. The same American forces through the NED, a spinoff from the CIA, continue their activities through so-called Tibetan “dissidents”.

TCF filed a Freedom of Information Act request to the NED on its funding for the CTC, back in April 2022, and as of September 29 a FOIA analyst noted that 22 requests were in front of this request.

CSIS responded to the ATIP with a letter that claimed they "could neither confirm or deny that the records you requested exist." But they proceeded to explain how "such records, if they existed," could be exempted via a few subsections of the Act governing ATIPs in Canada. Notably, one of the sections cited was 15(1) "(as it relates to the efforts of Canada towards detecting, preventing or suppressing subversive or hostile activities)."

Geoffrey Young is a US House of Representatives candidate who wants to abolish the CIA, running for the Democratic Party in Kentucky's sixth Congressional District. Young believes that “the refusal of the Canadian Security Intelligence Service (CSIS) to disclose records related to the NED and groups it funds in Canada strongly suggests that it has something to hide from the Canadian people.  The Government of Canada has been vigorously supporting Washington's illegal, proxy war of aggression against Russia and Ukraine in Eastern Europe, and control of public opinion is essential when a government is engaged in a shooting war.”

Young said that “The best way for the Canadian government to prevent NED interference in Canada would be to treat it and the CIA as terrorist organizations and ban them from operating in Canada under threat of arrest and prosecution.”

If elected to the US House in November 2022, Young “will work to abolish both the CIA and the NED, for the same reason: they are both terrorist organizations that conduct illegal regime-change operations constantly all over the world.”

Ken Stone, treasurer of the Hamilton Coalition to Stop the War, was intimidated by CSIS in 2013, in retaliation for publicly calling, in the Hamilton Spectator, for the Canadian government to return to diplomatic relations with Iran. Stone finds it deeply disturbing that no other Canadian outlet has covered revelations of NED interference in Canada, and wasn’t surprised in the slightest that CSIS would want to cover up any knowledge of NED activities in Canada it has.

William Dere believes that CSIS wants “to cover up the possible links between the CTC and western governments seeking to destabilize China using outside forces, like the Tibetan ‘government in exile.’”

CSIS has campaigned to create paranoia among Canadian Members of Parliament and even local British Columbia (Canadian province) politicians, about the spectre of supposed Chinese, Russian and Iranian ‘interference’. Yet, CSIS seeks to avoid disclosing any records it has about the influence of a CIA-front group, the National Endowment for Democracy, in Canadian politics. The utter hypocrisy is staggering. While claims of Chinese, Russian and Iranian interference rely on the word of an imperialist intelligence agency whose government hates these nations, NED interference in Canadian public is out in the open, not even hidden by the NED, but brought to the Canadian public’s eye by The Canada Files. CSIS is seeking to cover up their awareness of CIA-front activities in Canada, and the subversion of Canadian sovereignty that NED funded groups have engaged in. CSIS functions in service of Canadian imperialism, not the Canadian people.

Aidan Jonah is the Editor-in-Chief of The Canada Files, a socialist, anti-imperialist news outlet founded in 2019. Jonah has broken numerous stories, including how the Canadian Armed Forces trained neo-Nazi "journalist" Roman Protasevich while he was with the Azov Battalion, and how a CIA front group (the NED) funded the group (URAP) which drove the "Uyghur genocide" vote in parliament to pass this February. Jonah recently wrote a report for the 48th session of the UN Human Rights Council, held in September 2021.