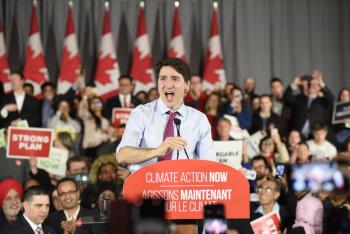 Prime Minister Justin Trudeau and leader of the Liberal Party of Canada, delivering remarks to supporters at a Liberal Climate Action Rally in Toronto, ON, on March 4, 2019. (Photo by Arindam Shivaani/NurPhoto via Getty Images)

The Liberal government continues to promote an often-controversial industry across our planet.

Canada is home to 75% of the world’s mining companies. Present in most countries, Canadian-based or listed firms operate about 4,000 mineral projects abroad, which works out to over 20 per UN member state.

There have been an astounding number of conflicts at Canadian-run mines. Pick almost any country in the Global South — from Papua New Guinea to Ghana, Ecuador to the Philippines — and you will find a Canadian-run mine that has caused environmental devastation or been the scene of violent confrontations.

Recently Mexican president Andres Manuel Lopez Obrador (AMLO) criticized Americas Gold and Silver. The Toronto-based company is accused of blocking workers from unionizing at their mine in northern Mexico.

AMLO has repeatedly criticized Canadian mining companies’ failure to pay outstanding taxes. But Canadian diplomats have gone to bat for the companies embroiled in a tax dispute with the Mexican government. Seventy per cent of foreign-owned mining companies operating in Mexico are Canadian-based and the embassy has repeatedly backed controversial mining projects.

Straight south, Canadian firms have dominated mining in Guatemala as well. In March a case was brought before the Federal Court alleging the minister of foreign affairs had improperly withheld information about its support for a Vancouver company that ran roughshod over indigenous communities in the Central American country. The federal government has refused to release details about its communications with Goldcorp, Guatemala and the Inter-American Commission on Human Rights after the commission called for the closure of Goldcorp’s Marlin mine due to its lack of consultation with Indigenous communities.

A different Canadian court is currently hearing another case about a mining firm in Guatemala. Hudbay Minerals (previously Skye Resources) is being sued for its role in the gang-rape of eleven Indigenous women. The Intercept recently published “Evicting Lote Ocho: How a Canadian Mining Company Infiltrated the Guatemalan State” that reported on internal corporate documents released during the precedent-setting lawsuit. The files paint a picture of corporate influence and abuse.

In Brazil Belo Sun Mining has benefited from far-right President Jair Bolsonaro’s hostility to indigenous rights and the environment. The Toronto-based company was recently allowed to move forward with a highly contentious gold mine in one of the most biodiverse regions on Earth. It’s use of heavy metals and cyanide in the Amazon’s Xingu River will “prompt the last stages of ecocide”, according to Rosana Miranda of the Sao Paulo-based Amazon Watch.

In March, protesters pelted Argentinian President Alberto Fernandez’s bus over his support for mining in Patagonia. Local and indigenous communities in the southernmost part of the hemisphere strongly oppose projects by Canadian firms Pan American Silver, Yamana Gold and El Dorado Gold. Mining and real estate interests have been pushing for mining bans to be lifted in the region. Suspected as a way to weaken opposition to capitalist encroachment, a wave of fires thought to be caused by arson, have destroyed land that Indigenous communities have protected from miners and developers.

Around the world Canadian-run mines commonly destroy farmland, harm endangered species and contaminate drinking water. They have also spurred beatings, kidnappings, arbitrary arrests and killings in the communities nearby. Canadian mines often undermine Indigenous self-determination and are pushed through despite overwhelming local opposition.

Over the past two decades thousands of articles, reports, documentaries and books have detailed Canadian mining abuses abroad. At least five UN bodies have called on Ottawa to hold Canadian companies accountable for their international operations. In 2015 the UN Human Rights Committee noted: “The State party [Canada] should (a) enhance the effectiveness of existing mechanisms to ensure that all Canadian corporations under its jurisdiction, in particular mining corporations, respect human rights standards when operating abroad; (b) consider establishing an independent mechanism with powers to investigate human rights abuses by such corporations abroad; and (c) develop a legal framework that affords legal remedies to people who have been victims of activities of such corporations operating abroad.”

To comply with international criticism and present a progressive face the Liberals promised to establish an independent ombudsperson on mining prior to their 2015 election. But Trudeau’s government waited nearly four years to announce the Canadian Ombudsperson for Responsible Enterprise (CORE). Another two years passed before CORE started taking cases last month.

In a House of Commons committee recently Liberal MP John McKay reportedly “confronted” minister for Small Business, Export Promotion and International Trade Mary Ng over the government’s failure to provide CORE with sufficient power to properly investigate abuses by companies. All 14 union and NGO representatives on the government’s “multi-stakeholder advisory body on responsible business conduct” resigned in May 2019 after their concerns about the ombudsperson were disregarded. Instead of a robust, independent, position they promised to create in January 2018 CORE “relies on companies’ goodwill to voluntarily provide information that it requires in order to do an investigation,” said Emily Dwyer, coordinator of the Canadian Network on Corporate Accountability. “It has not been given the basic, minimum kind of mandate and tools that it would need to have any effect.”

The mining industry successfully thwarted legislation to constrain their abuses abroad. According to a report titled “Lobbying by mining industry on the proposed Canadian Ombudsperson for Responsible Enterprise (CORE)”, the two main industry associations met government officials hundreds of times between when the government announced it would establish an ombudsperson and its presentation of what turned into a largely powerless position. Between January 2018 and April 2019 the Mining Association of Canada and Prospector and Developers Association of Canada lobbied the federal government on 530 occasions. They met officials in the Prime Minister’s Office 33 times. The industry lobbying campaign was likely even greater since individual mining companies also organized dozens, if not hundreds, of visits.

While the government announced an independent position, they effectively created an advisor to the minister of international trade. But minister Mary Ng is an aggressive lobbyist for Canada’s global mining juggernaut. In March, her department put out a release noting “Minister Ng promotes Canada’s mining industry at virtual Prospectors & Developers Association of Canada 2021 Convention”. During the convention Ng addressed a Canada-Africa Chamber of Business event labeled the “biggest African Mining Event in North America”. Just before the global pandemic hit Ng traveled to South Africa to attend Mining Indaba, the largest African focused mining conference.

Extractive companies are big beneficiaries of Export Development Canada’s services. The crown corporation has provided tens of billions of dollars in financing and insurance to the extractive sector, including many controversial international projects. To the benefit of mining firms, the Liberals have demonstrated little interest in establishing human rights and environmental standards for EDC.

The Liberals have also boosted the Global Affairs run Trade Commissioner Service (TCS), which supports many mining projects. TCS officials based at Canadian diplomatic outposts assist firms with market assessments, problem-solving, contacting local officials, etc. “The TCS plays a pretty big role,” said Ben Chalmers, senior vice‑president Mining Association of Canada in 2019. Trade commissioners “stand behind us and give us the additional credibility that being associated with the Government of Canada abroad brings.”

Largely designed to protect Canadian mining investment, the Liberals have continued to negotiate and sign Foreign Investment Promotion and Protection Agreements (FIPAs). In a March 2017 release titled “International Trade Minister promotes Canada’s mining sector at Prospectors and Developers Association of Canada convention”, Francois-Philippe Champagne “announced that the Canada-Mongolia Foreign Investment Promotion and Protection Agreement (FIPA) is now in force. This agreement provides substantial protections for Canadian investors in Mongolia, where there are already significant Canadian-owned mining assets.” These investors’ rights accords circumscribe governments’ capacity to regulate corporations by giving them the right to sue governments — in a private, investor-friendly, international tribunal — for pursuing policies that interfere with their profit making.

The Trudeau government has also channeled large sums of aid to international mining. They’ve put up more than $100 million in assistance for international projects with names such as “West Africa Governance and Economic Sustainability in Extractive Areas”, “Enhanced Oversight of the Extractive Industries in Francophone Africa” and “Enhancing Resource Management through Institutional Transformation in Mongolia”.

In other words not much changed between the previous taxpayer-subsidizing corporate mining Conservative government and the current Liberals. Notwithstanding some “progressive” rhetoric, the sober reality is that Trudeau has largely continued the Stephen Harper Conservatives’ “Ugly Canadian” mining policies abroad.