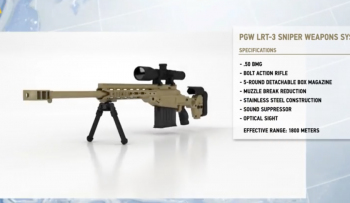 PGW Defence Technologies of Winnipeg will be delivering its LRT-3 .50 calibre sniper rifle to Ukraine’s military.

CHIP editors: For more on the role of neo-Nazi's in Ukraine's military read this article by Stephen F. Cohen in The Nation.

In an interview with Ukrainian media outlet, UATV, Ross Spagrud, the owner of Winnipeg-based PGW Defence Technologies, confirmed that the firm is providing Ukraine with the LRT-3, .50 BMG bolt action rifle. He said the deal is worth around $1 million.

The rifles will be equipped with suppressors.

Global Affairs Canada has declined to provide any details, stating it must protect the commercial interests of the firm involved.

In February 2016, PGW was in the news when it emerged that its LRT-3 .50 calibre rifles, sold to Saudi Arabia, had ended up in the hands of Houthi rebels. The guns were taken by rebels after a battle with Saudi forces.

In his interview with Ukrainian TV, Spagrud said there was little a company could do to prevent its weapons from falling in the wrong hands during a such a situation like an ongoing conflict. But he claimed that such rifles were “almost worthless” unless those using them had a year’s worth of training on the weapon.

In December 2017, the House of Commons defence committee recommended the Canadian government provide lethal weapons to Ukraine provided it demonstrates it is actively working to eliminate corruption at all levels of government. Senior officials from Ukraine’s ministry of defence had told members of the House of Commons defence committee last year they would welcome arms from Canada, including anti-tank weapons. They also told the committee that the Ukrainian military’s sniper equipment is obsolete and needs to be replaced. “In part to alter the situation in eastern Ukraine in a significant manner, the country would be interested in acquiring Canadian sniper equipment — rifles, telescopes and related items — and receiving sniper training from Canadians,” said the committee’s December report.

But Peggy Mason, a former disarmament ambassador to the United Nations and a security advisor to the Mulroney government, told the committee that providing lethal weaponry to Ukraine could prompt “escalatory actions” by pro-Russian separatist groups “because each side feels it must respond to a show of force by the other.” Sending arms into the ongoing conflict is the wrong direction for Canada to take, she argued.

Canada’s past decisions to ship arms into conflict zones have met with mixed results. The government approved the export of Canadian-made rifles to Kurdish forces fighting the Islamic State of Iraq and the Levant, but those weapons have since been turning up on the black market. Earlier this year, Turkish commandos battled terrorists in that country’s mountainous regime, recovering one of the Canadian rifles.