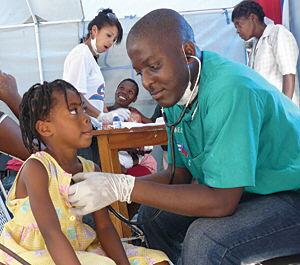 Are the health care achievements of Cuba, Partners In Health and MSF shaming the big powers into action?

A new, United Nations-supported program to reduce infant and maternal mortality in Haiti has recently been announced. Titled, Maman ak timoun an sante (Healthy Mothers and Children), the program will provide care to pregnant women, children under five years of age and people living in the camps of people displaced by the earthquake--approximately 3 million people in total.

Healthy Mothers and Children will reach into "90 health care institutions and 200 satellite structures" across Haiti, according to a September 15 report in Agence haitienne de presse (in English and French).[1]The Canadian International Development Agency is financing the program with $20 million. The initial stage will last until June 30, 2013.

The program will be administered by Haiti's Ministry of Public Health (MSPP) in association with the Pan American Health Organization (regional organization of the World Health Organization). According to a May 2011 PAHO/CIDA proposal document, services under the program will be administered by a combination of public health and non-profit and for-profit private health institutions, NGOs providing primary health care in the displaced persons camps, and the Cuban Medical Brigade.

CIDA funded the SOG program. It supported 70 health care institutions; 27,472 women benefitted from birth deliveries. SIG provided a package of health services to children less than five years of age. 40,000 children were treated under this program between June 2010 and February 2011 with the participation of 27 institutions.

A key feature of Healthy Mothers and Children is that the services it offers will be free. Partners In Health, the Cuban medical mission and Doctors Without Borders (MSF), among other health agencies in Haiti, have long argued that health care services must be freely available in order for health indicators to improve. Other international donors do not accept this rationale, so the fact that this program accepts the principle of free delivery is very positive.

Healthy Mothers and Children, as it has become, was one of four maternal health programs to which CIDA announced its support on January [2]of this year. The other three were:
* The reconstruction of Haiti's National School of Midwifery in Port au Prince and 10 new maternity clinics, in a consortium led by the United Nations Population Fund (UNFPA).
* An increased commitment--and the addition of a 30-bed maternity ward, a 35-bed paediatric ward, and a waiting home for pregnant women--to the original plans to build a new Gonaives provincial Tier II hospital.
* Improving maternal, newborn and child health services in Upper Artibonite province through the work of the Centre de coopération internationale en santé et développement (CCISD).

The government promised $50 million for these four projects. Further details do not appear to be available on the CIDA website, nor are the details of the financing. Does the $50 million consist of new, earthquake relief money or is it drawn from Canada’s five year, $550 million aid plan announced in 2006?

A free and comprehensive public health care system for Haiti?

Shortly after the 2010 earthquake, Haiti’s Ministry of Public Health sketched out a plan for health care delivery for the following 18 months. It would provide free access to a basic package of health services for vulnerable people at an estimated cost of $450 million.

At the March 31, 2010 international donors’ conference for Haiti held in New York City, Cuba put forward a plan for a comprehensive, public health care system in Haiti, to target, especially, the poor. The “Program for the Reconstruction and Strengthening of the National Health System in Haiti” was designed in cooperation with the Haitian government, Venezuela and other Latin American countries.

Cuba’s foreign affairs minister told the conference that the plan would cost $170 million per year for the first four years.[3]He said, “The medical program that we are proposing, in its entirety, will benefit 75% of the poorest population of the country at a minimum expense.

“We invite all governments, without exception, to contribute to this noble effort.”

The program would build and equip 101 primary care centers in Haiti attending up to 2.8 million patients a year. It would also build 30 rehabilitation wards for up to 520,000 patients a year as well as three electro-medicine centers, one orthopaedic prosthesis lab, and a comprehensive hygiene and epidemiology program.

Broad, international support was required for that amount of funding. Only Venezuela and Brazil added their firm support to Cuba’s. The goals of the plan were reiterated at another international summit meeting for Haiti that year, in the Dominican Republic on June 2.[4]

Cuba and its Haitian Latin American allies have proceeded with expanding their health care programs in Haiti, as have Partners In Health and other international agencies. To what extent these have been able to approach the goals of Cuba’s suggested four-year plan is not clear.

Undoubtedly, the health projects announced this year by Canada and other big powers are prompted by the positive moral and political pressures created by the bold (though entirely unreported in English language media) health care projects and proposals of Cuba and other medical agencies in Haiti. The promises by the big powers must be carefully monitored to ensure that they are acted upon and even expanded.

The record of past health care promises is poor. According to a CIDA working document, the agency is financing seven maternal health programs in Haiti of varying duration, covering the years 2005-13 and to the tune of app. $130 million. One of those, for $30 million, is a hospital in Gonaives that was promised by CIDA and the Canadian Red Cross as far back as 2004.

Four new, multi-year maternal and child health projects have been approved in 2011, including Healthy Mothers and Children, for a total of $47 million.

CIDA and the Canadian Red Cross announced assistance to construct a new hospital in Gonaives way back in the aftermath of Hurricane Jeanne in September 2004. But it proved to be a false promise. C|IDA now claims that foundation stones were laid in May, 2011.

Hurricane Jeanne struck Gonaives, the fourth largest city in Haiti, in the aftermath of the overthrow of elected government in February 2004. The Canada/U.S./Europe-backed coup d’etat  removed Haiti’s elected president, Jean-Bertrand Aristide, and dismantled all the other institutions of elected and representative government in the country.

One consequence is that Gonaives was without civil protection as Hurricane Jeanne bore down. More than 3,000 people died when the hurricane struck. The city was under water and mud for weeks afterward. This writer visited Gonaives in August 2007 and the city was still in ruin.

(Another consequence of the 2004 coup is that Haiti’s only medical school was taken over by U.S. and then UN soldiers and used by them until recently as a military barracks! The school was recently reopened as part of the University of the Aristide Foundation for Democracy.)

On August 31, 2011, Human Rights Watch published a study on the conditions of women and girls in post-earthquake Haiti that is a reminder of the urgency of improving health care in Haiti. Titled Nobody Remembers Us, it is a damning indictment of the failure of world’s wealthy and powerful countries and UN agencies, both before and after the earthquake, to sufficiently assist Haitian authorities in establishing adequate health care services.[5]

Among the facts reported in the study are the following:
* At the time of the earthquake, there were app. 63,000 pregnant women and 114,000 lactating mothers among the 3 million people directly affected.
* Half of women surveyed reported births taking place without medical assistance, often in unsafe and unsanitary conditions.
* Teenagers in the survivor camps are vulnerable to sexual violence and unplanned pregnancies due to the absence of personal security and the weakening of traditional forms of family and societal protection.
* An October, 2010 study cited in the report found a pregnancy rate of 12 percent in the camps, three times the average urban rate prior to the earthquake. Two thirds of those pregnancies were unplanned and unwanted.
* Many women and girls told Human Rights Watch researchers that there is no family planning information in the camps where they reside.
* Based on the study’s interviews, many women survivors in the camps are engaging in sex to obtain food or other basic necessities. The study uses the term “survival sex” to describe this reality.

Roger Annis is a coordinator of the Canada Haiti Action Network. He can be reached at rogerannis(at)hotmail.com.

Port-au-Prince, Thursday, September 15, 2011 - (AHP) - Today, the UN health organizations PAHO/WHO officially launched a program of maternal and child health aimed at helping Haitian authorities reduce the rate of infant mortality as well as the number of women who die during childbirth.

This program, named "Mama ak timoun an sante" (Healthy Mothers and Children), is being supported by the Canadian International Development Agency (CIDA) in the amount of $20 million. It will be implemented for the benefit of more than 3 million persons, in particular pregnant women, new-borns, children under five and persons living in displaced persons camps.

The Canadian Ambassador to Haiti, Henri-Paul Normandin, announced that the program would be implemented through a network of 90 health care institutions and 200 satellite facilities across the country, in such a way that the largest possible number of persons can be reached.

The beneficiaries will have access to consultations, medical exams, hospitalizations and free medication, said the diplomat, who emphasized that the program will reimburse the cost of the services provided to patients.

President Michel Joseph Martelly commended the efforts that PAHO/WHO and CIDA have continued to make in support of the Ministry of Public Health and Population (MSPP) to enable a large number of citizens, particularly women, children and infants, to gain access to quality health care.

He recalled that the ratios of infant and maternal mortality in the country were 64 per 1,000 and 630 per 100,000, respectively. These, he said, were the hard numbers, while most victims came from the most disadvantaged, most marginalized classes.

The Head of State also recalled that, in subscribing to the MDGs (Millennium Development Goals), the country had committed itself to promoting reproductive health. He reiterated that no woman should have to die in giving life.

Appealing for the establishment of a birth control program, President Martelly encouraged sexual partners to behave responsibly, emphasizing that galloping population growth represented a scourge for the least developed countries, including Haiti.

The Haitian Minister of Health, Dr. Alex Larsen, revealed for his part that an analysis of the current health situation of women and children clearly showed that access to quality health care was very limited. Women and children in the country were dying daily from preventable causes. This was due among other things to an insufficiency of pregnancy, childbirth and newborn care, which he deplored.

Dr. Larsen noted, however, that for about 20 years, Haitian authorities had been making significant efforts aimed at increasing the quantity and quality of access to health services. Nevertheless, 70% of home births were beyond the control of health authorities and were carried out by unqualified persons.