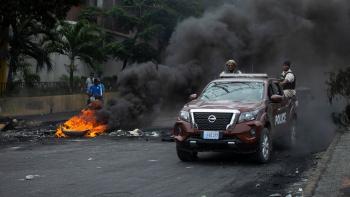 The U.N. Security Council unanimously approved a resolution Friday that calls on all countries to stop the transfer of small arms, light weapons and ammunition to any party in crisis-torn Haiti supporting gang violence and criminal activity.

Haiti is experiencing escalating bloodshed and kidnappings by criminal gangs, and China had proposed a rival text that would have authorized a U.N. arms embargo on the Western Hemisphere’s poorest country. But other council members said an embargo would be unenforceable.

The resolution drafted by the United States and Mexico that was approved on a 15-0 vote Friday does demand an immediate cessation of gang violence and criminal activities, as China wanted.

It also expresses the council’s readiness to impose sanctions that could include travel bans and assets freezes “as necessary” on individuals engaged in or supporting gang violence, criminal activity or human rights violations in Haiti within 90 days of the resolution’s adoption. That language is weaker than China’s proposal, which called for action within 30 days.

The back and forth came in negotiations over a resolution to extend the mandate for the U.N. political mission in Haiti. The council’s previous authorization for the mission expired Friday.

China’s U.N. ambassador, Zhang Jun, said the resolution could have been stronger, but called it “a right step in the right direction” in warning Haiti's gangs.

“The gangsters must immediately stop violence and criminal activities and the occupation of public facilities and roads, and seas, all acts of human rights violations,” Zhang added.

Instead, it asks Guterres to consult with Haiti’s government, “relevant countries” and regional organizations on “possible options for enhanced security support … to combat high levels of gang violence” and to submit a report by Oct. 15.

The resolution adopted Friday retained the original U.S.-Mexico draft's call for beefing up the U.N. mission to include up to 42 police and corrections department advisers, led by a U.N. police commissioner, and staff to ensure that sexual and gender-based violence are addressed.

When the current resolution extending the U.N. mission was adopted in October, Haiti had been contending with the assassination of President Jovenel Moïse last July, a magnitude 7.2 earthquake that killed over 2,200 people in August, and escalating gang-related killings, kidnappings and turf wars.

A year after Moïse’s assassination, gang violence is even worse, and Haiti has gone into a freefall that has seen the economy tumble and many Haitians flee the country to escape the turmoil. At the same time, attempts to form a coalition government have faltered, and efforts to hold general elections have stalled.

This week, officials in Haiti’s capital reported that dozens of people had died as a result of days of fighting between rival gangs in the violent Cite Soleil neighborhood. Doctors Without Borders said thousands of people were trapped in the district without drinking water, food and medical care.

The resolution approved Friday expresses “grave concern about the extremely high levels of gang violence and other criminal activities, including kidnappings and homicides, and sexual and gender-based violence, as well as ongoing impunity for perpetrators, and the implications of Haiti’s situation in the region.”

It notes “with deep concern the protracted and deteriorating political, economic, security, human rights and food security crisis in Haiti.”

The resolution urges the government to strengthen the rule of law, tackle social and economic problems, initiate violence reduction programs, singling out the need to target sexual violence and manage weapons and ammunition. It also calls for the illicit trafficking and diversion of arms and illicit financial flows to be urgently addressed.

The United Nations has been involved in Haiti on and off since 1990, and the last U.N. peacekeeping mission was in the country from 2004 until October 2017. The political mission now there advises Haiti’s government on “promoting and strengthening political stability and good governance,” including the implementing the rule of law, inclusive national dialogue and protecting and protection of human rights.

CHIP Editor's note: The UN "Peacekeeping" Mission - MINUSTAH & MINUSTAJH, was an occupying force that is responsible for several crimes against Haitians including rape by UN soldiers, introducing cholera into the water supply, suppressing dissent, aiding in consolidating the Latortue dictatorship, and murder.