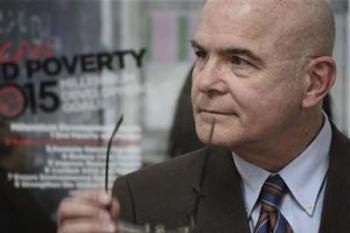 In his report Forst notes that the “question of what caused the outbreak of the epidemic in Haiti remains a burning issue that has attracted significant public controversy.” Over the last few years, a number of scientific reports have identified U.N. troops as the source of cholera’s introduction. Forst’s report, which was issued before the U.N.’s denial of victims’ compensation claims, notes “that silence is the worst response.”

The U.N. broke their “silence” on the issue by rejecting the victims’ claims, yet they have continued to stonewall on the issue of responsibility. While Forst “deplores” the exploitation of the issue by “certain organizations…for political ends,” he recognizes the “need that victims or their families have expressed to know the truth and perhaps even to be given compensation.”

In addition to recommending shedding light on the cause of the outbreak, Forst also calls on the international community and Haitian government to, “Secure international assistance to combat the spread of the cholera epidemic.” The claim against the U.N., in addition to seeking damages, also asks for the U.N. to fund the needed infrastructure to eradicate cholera from Haiti. A 10 year, $2.2 billion eradication plan has been announced, but thus far the funding for it remains in doubt. The plan for the first two years notes that “The total cost for implementation of the Action Plan for 2013–2015 is estimated to be US$443,723,100.” So far, little more than half of that - $238 million - has been secured, most of it from existing funds.

On Sunday, the New York Times editorial board added their voice to those critical of the U.N.’s immunity claim, noting that the U.N.’s “handling of cholera is looking like a fiasco.” The Times adds:

While it insists that it has no legal liability for cholera victims, it must not duck its moral obligations. That means mobilizing doctors and money to save lives now, and making sure the eradication plan gets all the money and support it needs.

Its record so far is dubious. A U.N. appeal last year for $24 million for cholera programs ended the year only 32 percent financed, and in December, the U.N. said it would contribute $23.5 million to the new 10-year plan — about 1 percent of what is needed.

The opinion from the Times comes after the medical group Doctors Without Borders (MSF) warned last week that a “lack of funds and supplies has crippled cholera treatment programs in Haiti, leading to unnecessary deaths and increasing the risk of greater outbreaks during the upcoming rainy season.” Duncan McLean, MSF program manager in New York, added that, “Cholera now appears to be seen as a development issue to be resolved over the next 10 years, whereas the current situation still calls for an emergency medical response…The necessary resources for such a response are becoming increasingly scarce.”

And who should pay for that? In an article for The Nation, Isabeau Doucet asked Yann Libessart, MSF communications officer, who offered a blunt response: “The people who are responsible for the introduction of the disease into the country.”

While the U.N. has only funded 1 percent of the plan, Nigel Fisher, head of the U.N. Stabilization Mission in Haiti (MINUSTAH) – whose troops caused the cholera outbreak - told Doucet that the rest of the money should come from the “private sector” or “major venture philanthropist individuals.”

Yesterday the U.N. Security Council met to discuss the Secretary General’s annual report on MINUSTAH. Some countries used the opportunity to call on the U.N. to do more to combat the cholera epidemic. The representative from Luxembourg noted that the launching of a cholera eradication plan was part of the international community’s “moral responsibility” to help those affected. The representative from Togo went even further noting that “the source…was known,” and that the “United Nations should continue to assume a “moral responsibility” to eradicate that disease.” Permanent members of the Security Council such as the U.S. remained silent on the issue.