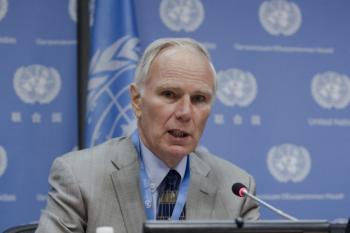 Philip Alston, the UN’s Special Rapporteur on extreme poverty and human rights, was the lead author of a letter to UN Secretary General António Guterres charging the body with making “illusory” promises to Haitian victims of the cholera epidemic which UN soldiers caused.

Philip Alston, the United Nation’s Special Rapporteur on extreme poverty and human rights, does not mince words when the UN obstructs justice.

He was the lead author of an Apr. 30, 2020 letter to UN Secretary General António Guterres charging the body with making “illusory” promises to Haitian victims of an almost decade-long cholera epidemic which UN soldiers caused.

Alston with 13 other UN Special Rapporteurs called on the UN to “urgently step up efforts” to help the victims of Haiti’s first cholera epidemic, which killed about 10,000 and sickened close to one million.

“The importance of relief is even more urgent in light of the COVID-19 pandemic, which could deal a double blow to victims of the cholera outbreak and their families,” the UN experts said. “We recognize the immense challenges all actors face in responding to the coronavirus, but this new threat cannot mask past failures and ongoing violations.”

The “violations” are not due to negligence. With Washington’s full support, the UN actively stonewalled a tenacious international campaign of lawyers and grassroots activists seeking financial compensation for cholera victims. The international body has refused to fully admit and accept responsibility for the disaster, which occurred after Nepalese UN soldiers allowed cholera-laced sewage to leak from their outhouses into the headwaters of Haiti’s largest river, the Artibonite.

Although former Secretary General Ban Ki-Moon made a “half-apology” on Dec. 1, 2016, in the final days of his term, he only apologized “that the UN has not done more to eradicate cholera, but not for causing the disease in the first place,” Alston said at the time.

The “half-apology” was necessary to blunt such growing accusations while avoiding legal liability for the epidemic. As Alston and his colleagues underline in their letter, the UN admitted only “its ‘moral responsibility’ but not its legal one. Asking UN Member States to make a charitable contribution is entirely different from payments linked to a legal obligation.”

As a result, the UN now has raised only 5% of the funds it pledged to provide Haiti after Ban’s calculated expression of regret, and spent less than 1%. “Serious shortfalls in funding and expenditures make the UN’s promises illusory,” the 14 experts wrote in the letter which won’t be fully public until Jun. 27. “Despite initially seeking $400 million over two years, the UN has raised a mere $20.5 million in about three years and has spent a pitiful $3.2 million. This is a deeply disappointing showing following the loss of 10,000 lives.”

“The UN’s 2016 public statement and the subsequent launch of its $400 million plan [the “New Approach to Cholera in Haiti”] was due to six years of continuous litigation and advocacy efforts by cholera victims, the Institute for Justice and Democracy in Haiti [IJDH], Office of International Lawyers [BAI], and global allies,” said Sandra Wisner, a staff attorney with IJDH, which spearheaded the legal effort. “However, to date, the UN’s response to cholera is deeply inadequate and continues to violate victims’ right to effective remedy.”

Litigation against the UN has been stymied. On Jan. 9, 2015, the U.S. District Court of the Southern District of New York dismissed the case IJDH brought on cholera victims’ behalf, holding that the UN’s immunity prevented it from hearing the arguments. IJDH appealed to the Second Circuit Court of Appeals on Feb. 12, 2015, but that court dismissed the case on Aug. 18, 2016. “The UN’s position on immunity was criticized in Haiti and internationally, including by individuals and organizations who filed nine legal briefs in the court case in support of IJDH’s position,” Wisner explained.

The legal saga began on Nov. 3, 2011 when IJDH and BAI filed claims on behalf of 5,000 victims with the UN’s internal grievance system, requesting just compensation for their injuries, a public apology and admission of responsibility, investment in water, sanitation, and health infrastructure in order to eliminate cholera from Haiti, and the establishment of the standing claims commission.

The UN experts’ April letter was prompted by a formal complaint filed by BAI, IJDH, and the International Human Rights Clinic at Harvard Law School in January 2020 and comes as the new COVID-19 epidemic is starting to rear its ugly head in the nation of 11 million. Although testing is limited, there are now 100 official coronavirus cases in Haiti, resulting in 11 deaths. As testing improves in coming days, that figure is likely to soar to more closely match the neighboring Dominican Republic, which has 8,480 confirmed cases, with 354 deaths. Despite some border controls, there is a great deal of back-and-forth between the residents of the two neighboring countries sharing the island of Hispaniola.

“The shortcomings of UN policy have taken on renewed urgency in the context of the COVID-19 pandemic, as survivors of cholera are left particularly vulnerable,” Wisner concluded.