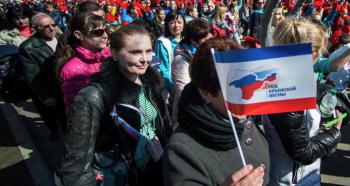 ‘Crimean Spring’ rally in Simferopol in March 2015 marks one year of secession from Ukraine, photo by Evgeny Biyatov, Sputkik News

The Office of the United Nations High Commissioner for Human Rights (OHCHR) has today issued a 48-page report purporting to analyze the state of human rights in Crimea. The report covers the period from February 2014 to September 2017. It largely consists of a litany of twisted and factually false assertions against Crimean and Russian authorities.

The UN office accepts the legality of the February 21, 2014 coup in Ukraine, it rejects the results of the March 16, 2014 self-determination vote in Crimea, it condemns the self-defense actions of the population of eastern Ukraine in resisting the coup, and it calls Crimea a territory “occupied” by Russia. Hence, this report on Crimea and similar, earlier reports by the same UN agency on Ukraine are largely exercises in filling in the blanks of a pre-determined script. Western journalists will read the first few pages of the report and then fire off their scripted stories of ‘Russian annexation’ accompanied by ‘human rights abuses’.

A few hesitant criticisms of Ukraine are thrown into the report for the sake of appearance of ‘neutrality’, but it’s all very polite. Here, for example, is how the report describes in its executive summary the cutting of water and electricity supply by Ukraine to Crimea in 2014 and 2015, respectively:

This is the latest in many reports produced by the Human Rights Monitoring Mission in Ukraine (HRMMU). It was established by the OHCHR in March 2014 upon the request of the UN Secretary General, acting on a request by the post-coup government in Ukraine (the government was no doubt counselled on this request by its international advisors).

Three articles by me in 2014 and 2016 analyze the methods and outcomes of previous such reports on Ukraine by the OHCHR and by the broader human rights industry. You can read those articles at the weblinks listed below.

The OHCHR is not an independent agency; it acts at the behest of the large Western countries. One need only look at Haiti for proof. For the past 13 years, the UN Security Council has conducted a violent and illegal military occupation of Haiti. The occupation is directed by the U.S., Canada and large countries of the EU, with Brazil given an outsized role in day-to-day military operations.

A large number of foreign countries contribute foot soldiers to the military occupation of Haiti through national military contingents operating in the name of the UN. Not only does this provide invaluable military experience in patrolling and containing civilian populations, these foreign countries are well paid by the UN to do so, allowing them to purchase military equipment that might otherwise be difficult to finance.

The criminality of the UN-OHCHR operation in Haiti went on full display in October 2010 when UN soldiers from Nepal introduced through reckless neglect the cholera bacterium into Haiti’s largest river system. The ensuing epidemic killed more than 10,000 Haitians, infected hundreds of thousands and overwhelmed Haiti’s weak and fragile medical services (largely furnished by charities at the best of times). One would expect the UN to make reparations for the cholera disaster it caused, but one would be naive in assuming this. Haitians together with U.S. legal advocates have bitterly fought the office of the UN Secretary General, demanding that it accept responsibility for the actions of its Haiti occupation regime. Finally, in December 16, 2016, Ban Ki-Moon ‘apologized’ for the cholera epidemic and promised financial compensation. Haitians are still waiting for the promised compensation.

Are there human rights violations in Crimea? I’m not aware of a single country in the world  that can claim to have a perfect record. But this UN report on Crimea, like previous such reports on Ukraine, manipulate facts and interpretations to create the illusion that, yes, things are very bad in Crimea; all the while positively downplaying comparisons to Ukraine, where the situation is far, far worse. Thousands of people have died in Ukraine from a cruel civil war being waged by the right-wing regime in power in Kyiv. Seveal million people have been displaced from their homeland by that same war. ‘So what?’, respond the human rights bright lights of the UN. ‘What about Russia,’ they parrot.