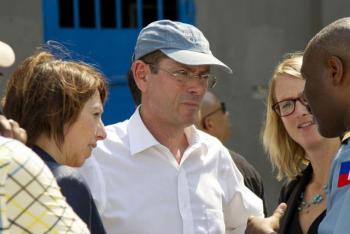 The enclosed article from the UN News Service reports on a recent visit to Haiti by a high-ranking human rights official of the United Nations. The official's report raises disturbing questions about the "police, prison and justice" reform that Canada and other international powers have been funding and directing in Haiti for the past eight years or more, including since the 2010 earthquake.

The report says that while police training in Haiti is in evidence, improvements to justice are not. On prison "reform," it reports that only four percent(!) of the 3,400 prisoners in Haiti's main, national penitentiary have been convicted of a crime. The remainder are detained in varying forms of preventive detention. Prison conditions are "precarious."

The report indirectly raises serious questions about the rental subsidy (camp clearance) "housing" program that Canada has been funding this year with as much as $20 million. The claims of the Haitian government and its international allies to have anything resembling a housing and shelter policy are demonstrably false.

The UN official's report must prompt concerned media and elected officials in Canada to begin to examine the human rights situation in Haiti and voice the appropriate concerns and remedies. Among media in Canada, only the Toronto Star has shown interest, though even its recent, praiseworthy reporting has been limited to the housing and shelter situation.

You can read about the international campaign for housing rights in Haiti, Under Tents, here. The campaign is soliciting endorsements from organizations as well as signatures by individuals to an international petition. Its original end date of October 1, 2012 has been extended to January 12, 2013, the third anniversary of Haiti's devastating earthquake. Among recent endorsers in Canada is the Vancouver and District Labour Council.

Several reports on the housing and shelter crisis have recently been posted to the Under Tents website. These include a statement by the 'Force for Reflection and Action on Housing' (FRAKKA) grassroots Haitian organization and a six-page report by Gender Action titled 'Haiti’s National Housing Policy: Will it work for women?'

A United Nations human rights official today said that while Haiti shows encouraging signs of progress, it is still facing challenges such as justice reform and poverty, and called on the international community to support the country’s long-term development.

“Haiti is at a crossroads. If the right steps are taken on a number of key issues, there is potential for progress – but at the same time, there are risks of backsliding,” said the Assistant Secretary-General for Human Rights, Ivan Šimonovic, who just finished a four-day visit to the Caribbean nation on Saturday.

During his visit, Mr. Šimonovic met with senior Haitian officials and representatives of civil society to discuss the human rights challenges ahead of the Security Council’s revision of the mandate of the UN stabilization mission there, known by its French acronym MINUSTAH. Mr. Šimonovic visited the national penitentiary, where some 3,400 inmates live in precarious conditions. He noted that only 278 inmates have been convicted, while the rest are in prolonged pre-trial detention, and stressed that this calls for stronger rule-of-law institutions.

“Police reform is not enough,” he said. “A more independent, reliable and efficient justice system is necessary to resolve not only this situation but to ensure that the rights of the population are better protected, including land rights. The ongoing penal code reform must be concluded without delay and should enable prosecution of past grave human rights violations in line with Haiti’s international legal obligations.”

Mr. Šimonovic noted that the planned recruitment of 5,000 police officers in the next four years has great potential for the country’s safety, but stated that they need to be recruited based on their merits and must receive adequate training. “The Haitian National Police will be strengthened and so will the confidence of the population. The role and independence of the Inspector General is key for ensuring that human rights violators are excluded from serving,” he said.

The international community must urgently increase its support to Haiti’s long-term development efforts as the massive humanitarian aid that came to the country in the wake of the 2010 earthquake declines, Mr. Šimonovic emphasized. “For too long, too many Haitians have been claiming their economic and social rights in vain, and have not even been reached by basic services. The new development efforts must be based on human rights and ensure that benefits are enjoyed by all, in particular the poorest.

“Many of the most vulnerable are still trapped in camps, on private lands and threatened by forced evictions. I have stressed the need for consultation with residents and respect for international human rights standards in the process of dismantling these remaining camps. A comprehensive housing and urban development policy is needed,” he added.

Strengthening the rule of law would also curb corruption, which would in turn attract investment and create new decent jobs, Mr. Šimonovic said.