U.N. mission in Haiti extended for another year by Security Council 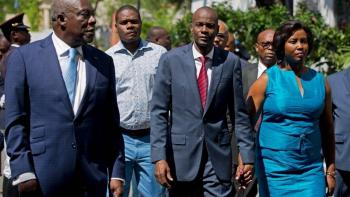 Disagreement in the international community over whether Haiti remains a threat to the region’s peace and security overshadowed the decision Tuesday by the U.N. Security Council to extend its support mission in the Caribbean nation for another year.

Both Russia and China abstained during the vote to continue the U.N. Mission for Justice and Support in Haiti — known by the acronym MINUJUSTH — for another year when its mandate expires on Sunday. The resolution also calls for the gradual reduction of U.N. police presence, based on Haiti’s security situation, beginning in October.

But the United States’ insistence on widening the scope under which UN forces can be deployed to Haiti beyond the mission’s security operations to restore peace under Chapter 7 of the U.N. charter divided council members.

Russia questioned why the designation is needed as part of a resolution that is supposed to be aimed at assisting the Haitian government with professionalizing its national police, monitoring human rights and strengthening its justice system.

Bolivia, though it supported the resolution, accused the U.S. of “not taking into account the opinions of other members of the Security Council and much less the opinions of the host country.”

“During the Security Council’s mission to Haiti last year, both the president of Haiti, members of the Haitian parliament, various representatives of civil society expressly asked that the mandate come under Chapter 6 of the United Nations charter,” said Sacha Sergio Llorentty Soliz, Bolivia's permanent representative to the U.N., who led the visit.

Chapter 6 sets out the ways to resolve conflicts through peaceful means.

Llorentty said the fact the resolution wasn’t unanimously approved was “a source of great concern because this is not sending out the correct message to the Republic of Haiti, to the mission and to the international community in general.”

Amy Tachco , the U.S. political coordinator at the U.N., responded to the criticism by saying some members of the council were trying “to sow confusion about what is standard peacekeeping language in a Security Council mandate.”

Haiti President Jovenel Moïse, who was reluctant to sign on to the current, smaller U.N. mission after last year’s departure of peacekeepers after nearly 14 years, believes that the Chapter 7 designation hampers Haiti’s development by promoting an image the country is a security risk for investors.

In February, Moïse and the U.N. became embroiled in a diplomatic row after the head of MINUJUSTH, Sandra D. Page, issued a statement welcoming a judicial corruption inquiry into how $2 billion in oil loans from Venezuela was spent by former Haitian government officials. Page also called on Moïse’s government to look into alleged human rights violations by the Haiti National Police during a raid in a gang-ridden slum, Grand Ravine.

Accusing the U.N. of overstepping its role, Moïse recalled his U.N. ambassador back to Port-au-Prince for consultations and canceled his government’s participation in a U.N.-sponsored cholera retreat.

Page has not been back in Haiti since the incident and did not deliver the secretary general’s report on the situation in Haiti to council members last week ahead of Tuesday’s vote. Delivered instead by Jean-Pierre Lacroix, under-secretary-general for peacekeeping operations, the report contains 11 benchmarks for a transition of the U.N.’s presence in Haiti to a non-peacekeeping one. Lacroix said work was already under way to make that happen.

He acknowledged “a misunderstanding between MINUJUSTH and the government of Haiti” but said he “was encouraged” by a better alignment recently of priorities between the two.

Lacroix said the U.N. mission “can only be effective if it has a sound relationship with the Haitian government and people based on solidarity and mutual trust.” Council members agreed while encouraging the Haitian government to work with the mission to, among other things, adopt a draft criminal code and address the prolonged detention of inmates.

Haiti was continuing to make strides toward stability, but challenges and risks remain, they also noted.

“Haiti has come a long way to achieve the relative political and security stability it is now enjoying, but persistent economic uncertainties, which can result in social exclusion, particularly of youth and the most vulnerable, may undermine this progress,” Lacroix said.

On Tuesday, Haiti’s U.N. Ambassador Denis Regis did not hold back his displeasure with the security risk designation.

“My delegation deplores the fact that the remarks delivered through members states of the council have not been taken into account,” Regis said insisting that, “MINUJUSTH is a support mission; a mission for support and technical assistance for the national institutions assigned with upholding rule of law in Haiti.”

The Russian Federation joined Haiti in its outrage.

Dimtry Polyanskiy, the first deputy permanent representative of the Russian Federation, wondered what had changed in Haiti: “I would like to ask supporters of this approach, how did the situation with human rights change in a country where there has been no armed conflict for a long time so that it suddenly became a threat to international peace and security?”