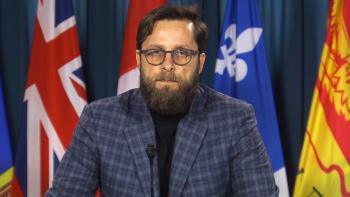 The UN refugee agency’s representative in Canada, Jean-Nicolas Beuze, said Monday he wants to dispel the "myths" about the record number of asylum seekers that entered Canada from the U.S. in 2017, as fears abound that Canada’s immigration system is stretched to a breaking point.

Beuze said the goal of his press conference on Parliament Hill was “to dispel some fears within the population that those people who are arriving in large numbers in Canada pose any threat to the security of Canadians or are people who are not entitled—for whatever reason—to the protection of Canadian authorities.”

Asylum claims surged to 50,000 in Canada in 2017—more than double from the year prior and the highest number of claims in more than two decades—according to data from Citizenship and Immigration Canada.

Beuze said that most of those seeking asylum in Canada in 2017 did so at regular points of entry, like an airport, seaport or land border. Roughly 20,000 crossed into Canada irregularly, he added, with the majority of irregular arrivals taking place in Quebec.

He also challenged the idea that the withdrawal of temporary protected status for various immigrant groups in the U.S., coupled with anti-migrant rhetoric coming from the White House, was responsible for the surge in asylum claimants.

A large number of the people coming into Canada are simply passing through the U.S. on the way to their final destination in Canada, Beuze said.

Many Haitians, who made up a large number of those crossing the U.S.- Canada border, were “going through the United States, spending only a few days, coming directly from Haiti or coming from other places such as Brazil,” he explained.

Other Haitians decided to make the trip north because of what Beuze said was inaccurate and “sometimes intentionally wrong” information shared within the Haitian community that suggested arrivals in Canada would automatically be granted permanent residency or social benefits.

“Those who arrive are not just given a red carpet,” he said.

Beuze’s press conference occurred on the same day that Quebec’s immigration minister, Daniel Heurtel, asked the federal government for $146 million to help prepare for what he expects to be up to 400 border crossing per day this summer and to help manage a backlog of requests from last year.

The federal government committed $173.2 million to help process asylum claims and to assist operations at the Canada-U.S. border.

Beuze cautioned against raising the alarm over the record number of arrivals, noting that migration flows are tricky to forecast.

“We may see an increase of people coming over the border through irregular means,” he said. “But we really do not know.”

“Canada should not cry wolf,” he added.