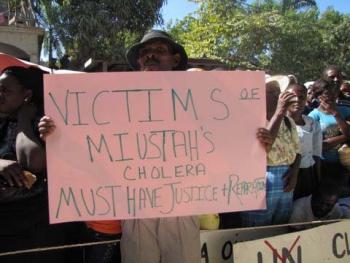 Tuesday, 20 December 2011
Yesterday, the Center for Economic and Policy Research (CEPR) released a statement (see text below) calling on MINUSTAH to take responsibility for the cholera outbreak in Haiti that has already killed over 7,000. In the release, CEPR co-director Mark Weisbrot says, "This is a case of criminal negligence, and the UN, if it is to continue to be worthy of the respect of people around the world, must own up

to the fact that it caused this problem." The statement cites the "false and deceptive" arguments offered to a BBC interview last week by UN Special Envoy to Haiti Nigel Fisher (see that BBC report here).

You can read the statement and a related article below. There you can also sign an online petition calling for justice for cholera victims.

Despite overwhelming evidence, the UN has still not taken responsibility for the cholera disaster in Haiti

By Mark Weisbrot, The Guardian (UK) Tuesday 20 December 2011
If an international agency brought a deadly disease to New York City that killed more people than the 9/11 attacks, what would be the consequences? Could they simply brush it off and have nobody hold them accountable for the damages? The answer is obviously no, and the same would be true for most of the countries in this hemisphere. But so far, it looks like they can get away with it in Haiti.

For some reason the "international community" thinks that it can get away with anything in Haiti. More than 7,000 Haitians have been killed since October 2010 by the deadly cholera bacteria that UN troops brought to Haiti in the aftermath of the devastating earthquake in January that year.

More than 500,000 have been infected, and the disease – which Haiti has not had in more than a century – is now endemic to the country and will be killing people there for many years to come.

Last week, UN officials once again denied responsibility for the disaster, and were, in my view, publicly dishonest about the available scientific research – some of which was included in the UN's own report on the epidemic (see here) to-peacekeepers-UN-admits.html. On Thursday, Nigel Fisher, the UN's Deputy Special Representative for MINUSTAH said: "I think we all regret the breakout of this thing and I don't think the UN has ever denied the possibility [that it could have been at fault]." But he went on to say that describing the strain as Asian was "not helpful", telling the BBC:

The cholera strain we have in Haiti is the same as the one they have in Latin America and Africa. They all derive from Bangladesh in the 1960s so they are all an Asian strain.

The Associated Press's reporter described that comment as "patently untrue", and the UN's own report (PDF) was definitive about the origin of the strain. "Overall, this basic bacteriological information indicates the Haitian isolates were similar to the Vibrio cholerae strains currently circulating in South Asia and parts of Africa, and not to strains isolated in the Gulf of Mexico [or] those found in other parts of Latin America ..."*

So according to the UN's own research, Fisher was – at the very least – misleading. The evidence for the origin of the epidemic is overwhelming.

In the United States criminal justice system, we have the standard of "beyond a reasonable doubt" for a guilty verdict. The evidence in this case far exceeds even that standard, let alone the less rigorous standard for civil lawsuits.

The UN's own study was clear: "The source of the Haiti cholera outbreak was due to contamination of the Meye Tributary of the Artibonite River with a pathogenic strain of current South Asian type Vibrio cholerae as a result of human activity." In other words, somebody dumped human fecal matter containing a deadly cholera bacteria from South Asia into one of the country's main sources of water for drinking and irrigation. Who might that be?

Suspect number one is the UN troop encampment from Nepal. From the Associated Press at the time of the outbreak:

When Associated Press journalists visited Wednesday, they found open and cracked pipes behind the base, with U.N. military investigators taking samples. There was an overpowering smell of human waste, and a pipe leading toward a septic tank was leaking foul-smelling black fluid toward the river.

The waste is dumped across the street in open pits that residents, who live a few yards away, said often overflow into the Artibonite tributary running below.

A UN official told the BBC that "everyone knew the sanitary situation in the Nepali base was deplorable".

But that's just some of the evidence on the ground. The scientific evidence is even more conclusive. The UN report itself provided quite a bit of genetic evidence with regard to the South Asian origins of the cholera bacteria in Haiti, but tried to leave some wiggle room.

But in August a more definitive research paper was published by a team of fifteen scientists that had access to samples of the cholera bacteria from Nepal. This study used whole-genome sequence typing and two other methods to compare the genetic make-up of the cholera bacteria in Haiti to that of Nepal at the time that the contingent of troops from that country came to Haiti. This study also found a "close relationship" between the Haitian and Nepalese strains of the bacteria.

The most recent study confirms what was found in previous studies, for example, one published in the New England Journal of Medicine in January of this year. Harvard microbiologist John Mekalanos was a co-author of that article, and commented to Science Magazine on the most recent study comparing the Haitian and Nepalese strains of the bacteria:

"They're practically identical. This is as close as you can come to molecular proof" for the Nepalese link, says Harvard University microbiologist John Mekalanos, the author of the first genomic study on the issue, who had tried in vain to get his hands on samples from Nepal himself. "The authors have to be congratulated for closing the book on this issue at the molecular-genetic level."

These studies also confirm a detailed investigation from the U.S.-based Center for Disease Control, headed by French epidemiologist Renaud Piarroux, whose "findings strongly suggest that contamination of the Artibonite and one of its tributaries downstream from a military camp triggered the epidemic."

How much more evidence could we possibly need? You can bet that any impartial jury or judge in the world would find that the UN brought this epidemic to Haiti. And according to most countries' laws, they would have to pay for what they did. Indeed there might even be criminal responsibility, since this action was so incredibly reckless in its disregard for the life and health of the victims.

UN officials had to be aware of the dangers that troops coming from an area where there was cholera could pose to a country like Haiti, where so many people do not have access to clean water or sanitation facilities. They had to know how important it was not to let that bacteria pollute the country's water supply.

Where are all the human rights organizations on this issue? Is the UN so sacrosanct, or perhaps influential, that nobody can state the obvious when an abuse of this horrific magnitude has been committed? So far one small, brave, and independent NGO – the Institute for Justice and Democracy in Haiti – has announced it will pursue legal action to force the UN to pay for the damages.

Additionally, a Brazilian group – the Faculdade de Direito de Santa Maria – has filed a complaint with the OAS's Inter-American Commission on Human Rights. Perhaps even more important than compensation for the victims and their families, both groups are also demanding that the UN provide the public health infrastructure for water and sanitation that is necessary to eventually get rid of cholera in Haiti.

Everyone who cares about human rights in this hemisphere should join this effort to hold the UN accountable for this disaster.

(See also Population Genetics of Vibrio cholerae from Nepal in 2010: Evidence on the Origin of the Haitian Outbreak, published by the American Society for Microbiology, July 10, 2011 http://mbio.asm.org/content/2/4/e00157-11)

Washington, D.C.- The United Nations Stabilization Mission in Haiti (MINUSTAH) owes it to the half-a-million cholera victims in Haiti to take responsibility for having caused the outbreak, Center for Economic and Policy Research (CEPR) Co-Director Mark Weisbrot said today. Weisbrot also called recent statements by UN's head of Humanitarian Affairs in Haiti, Nigel Fisher, regarding the origins of the epidemic "false and deceptive."

"It is deplorable that a full 14 months after the discovery of the first cholera case, the UN continues to dodge responsibility for having reintroduced a deadly disease that has now killed a minimum of 7,000 people," Weisbrot said. "This is a case of criminal negligence, and the UN, if it is to continue to be worthy of the respect of people around the world, must own up to the fact that it caused this problem.

"Even worse, the UN, through its spokespeople, is attempting to mislead the public about the type of cholera strain that has been identified in Haiti."

Weisbrot noted that in recent comments to the BBC, Fisher claimed that "The cholera strain we have in Haiti is the same as the one they have in Latin America and Africa. They all derive from Bangladesh in the 1960s so they are all an Asian strain."

But this directly contradicts several scientific studies. Even the UN’s own report states: "Overall, this basic bacteriological information indicates the Haitian isolates were similar to the Vibrio cholerae strains currently circulating in South Asia and parts of Africa, and not to strains isolated in the Gulf of Mexico, those found in other parts of Latin America…" and that "A careful analysis of the MLVA results and the ctxB gene indicated that the strains isolated in Haiti and Nepal during 2009 were a perfect match."

In a case that continues to attract international interest and attention, last month, lawyers with the Institute for Justice and Democracy in Haiti and the Bureau des Avocats Internationaux filed for damages from the UN on behalf of 5,000 cholera victims. A Brazilian organization, the Faculdade de Direito de Santa Maria, has also filed a separate petition [PDF], seeking intervention by the Inter-American Commission on Human Rights, and calling for the UN to provide compensation to Haiti, the Dominican Republic, and other affected countries, and for a fund of at least $500,000,000 to create a public health system in Haiti.

If you have not already taken the time to do so, please sign the petition of the Institute for Justice and Democracy in Haiti/Bureau des avocats internationaux asking the United Nations to Stand Up for Haitian Cholera Victims' Human Rights. Sign the petition here: http://www.change.org/petitions/ask-un-to-stand-up-for-haitian-cholera-victims-human-rights-on-human-rights-day.