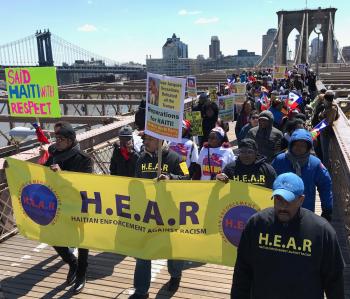 Protesting Trump’s racism and anti-immigrant policies, about 400 Haitians marched across the Brooklyn Bridge on Apr. 20, the 28th anniversary of a 1990 march by tens of thousands of Haitians against a racist FDA policy. Photo: Kim Ives/Haïti Liberté

"Many of the conditions prompting the original January 2010 TPS designation persist, and the country [Haiti] remains vulnerable to external shocks and internal fragility.”

This was not the assessment of hundreds of local, state, and national elected officials, religious, labor, and community leaders, legal experts, editorial boards of newspapers and magazines, Haitian civil society organizations, nor the Haitian government, which all used the argument above to plead with President Donald Trump’s Department of Homeland Security (DHS) to renew Temporary Protected Status (TPS) for some 41,000 Haitians living and working in the United States since the Jan. 12, 2010 earthquake.

Amazingly, the sentence above was DHS’s own appraisal, through its U.S. Citizenship and Immigration Services (USCIS), in a devastating 18-page internal report dated October 2017, one month before the DHS cut-off Haitians’ TPS. Under the order, Haitians with TPS must leave the U.S. by Jul. 22, 2019.

In her Nov. 20, 2017 decision, Acting DHS Secretary Elaine Duke “determined that those extraordinary but temporary conditions caused by the 2010 earthquake no longer exist.”

The smoking-gun document was one of dozens uncovered so far by a Freedom of Information Act (FOIA) request made by the National Immigration Project of the National Lawyers Guild (NIPNLG) and Professor Margaret Satterthwaite of the Global Justice Clinic (GJC) of NYU School of Law.

On Mar. 15, the NIPNLG joined with several other law firms to sue President Trump and his DHS officials on behalf of the weekly newspaper Haïti Liberté, the Miami-based community group Family Action Network Movement (FANM), and 10 Haitians currently living in the U.S. with TPS, charging “an arbitrary and capricious agency action.”

Haïti Liberté and FANM are also part of a coalition of Haitian, African, and North American organizations which will be demonstrating in front of the White House on Sat., May 19, 2018 to demand, among other things, permanent residency for all 300,000 TPS holders still in the U.S..

On the morning of Fri., Apr. 20, close to 400 Haitians and their supporters marched across the Brooklyn Bridge to call for green cards for TPS holders.

Rep. Nydia Velazquez (D-New York) has also introduced the American Promise Act of 2017, H.R. 4253, on Nov. 3, 2017. The bill would allow TPS holders, or those with deferred enforced departure (DED), to apply for permanent residency, if they do so within three years of enactment of the bill.

Along with Haitians, the Trump administration in 2017 cut TPS for Nicaraguans and Salvadorans.

The October 2017 document entitled “TPS CONSIDERATIONS: HAITI” was among over 200 pages of previously classified documents and emails which make up the first tranche released in response to NIPNLG’s FOIA request. The parties are continuing to litigate the FOIA request and there should be more document releases in coming weeks. Dozens of pages of the released documents are redacted but nonetheless reveal many clues of how the agency disregarded the facts it discovered.

“Haiti has also experienced various setbacks that have impeded its recovery, including a cholera epidemic and the impact of Hurricane Matthew — the latter of which struck

country,” the October 2017 DHS report continues. “As of August 2017, Haiti “continues to be affected by a convergence of humanitarian needs,” including food insecurity, internal displacement, an influx of returnees from the Dominican Republic, the persistence of cholera, and the lingering impact of various natural disasters.”

“These explosive revelations lay bare the Trump administration’s cynicism and duplicity,” said Berthony Dupont, Haïti Liberté’s director. “Trump and his DHS officials thumbed their nose at the findings of their own investigators. Their agenda is to expel black and brown immigrants. It is a patently racist policy that we will continue to fight in the streets and in the courts.”