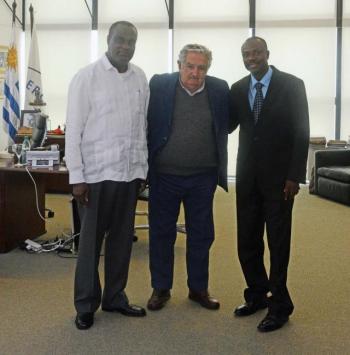 Following a visit earlier this month from Haitian Senator Moïse Jean-Charles, Uruguay’s President José Mujica told a council of ministers on Oct. 28 that he would withdraw Uruguayan troops from the United Nations Mission to Stabilize Haiti (MINUSTAH), the 9,000 soldier force which has militarily occupied Haiti since June 2004.

“It is a huge victory,” Sen. Jean-Charles told Haïti Liberté. “Uruguay’s bold step to show that it will no longer do Washington’s bidding in Haiti will hopefully be an example that other nations from around the world participating in MINUSTAH will follow.”

Uruguay has historically provided over 1,100 soldiers to MINUSTAH, the second largest contingent after the 2,200 provided by Brazil, whose generals have commanded the force since 2004. As of July, Uruguayans were deployed in Ft. Liberté and Morne Casse in Haiti’s Northeast, Hinche, Mirebalais, and Belladère on the Central Plateau, Jacmel in the Southeast, and Les Cayes in the South.

According to La Republica newspaper, Uruguay’s withdrawal will happen over the next 90 days and the country has already begun the gradual withdrawal of its air force and naval troops in Haiti. There are now about 850 Uruguayan soldiers in Haiti, according to the Uruguayan daily El Pais.

Twice, in September 2011 and May 2013, the Haitian Senate unanimously passed resolutions demanding that MINUSTAH leave Haiti. The latest deadline by senators gave all foreign troops a departure deadline of from Haiti of May 28, 2014. However, in a meeting with an international delegation on Oct. 10, UN Peacekeeping official William Gardner said that the UN Security Council is planning to keep troops in Haiti for at least another three years, until 2016.

MINUSTAH has a price-tag of about $850 million a year on average over the past nine and a half years it has been deployed.

“Originally, Brazil was told that the mission would last only six months,” said Barbara Corrales of the Brazil-based committee “To Defend Haiti is To Defend Ourselves,” which has affiliates throughout North America, Europe, Latin America and the Caribbean. “It is outrageous that the mandate was renewed again this month for the tenth year in flagrant violation of the Haitian Constitution, the Haitian Senate resolutions, and the UN Charter itself which prohibits meddling in UN member states’ internal affairs.”

Prior to his trip to Uruguay to meet with President Mujica in the Executive Tower in downtown Montevideo on Oct. 3, Senator Jean-Charles traveled to Brazil and Argentina in April where he met with government officials, parliamentarians, unions, students, and mass meetings.

“Brazil, Argentina, and Uruguay are not the real occupiers of Haiti,” Sen. Moïse told Haïti Liberté, as he has told audiences around the hemisphere from New York to Brasilia to Buenos Aires to Montevideo. “The real forces behind Haiti’s military occupation – the powers which are putting everybody else up to it – are the U.S., France, and Canada, which colluded in the Feb. 29, 2004 coup d’état against President Aristide. It was then they began trampling Haitian sovereignty.”

Deployed on the day of the coup, U.S., French, and Canadian soldiers occupied Haiti from March 1 to June 1, 2004, when they passed the mission on to MINUSTAH. In February 2006, the U.S. Government Accountability Office produced a report concluding that “it would cost the United States about twice as much as the United Nations to conduct a peacekeeping operation similar to the current MINUSTAH.”

In July 2011, four Uruguayan soldiers in the southern town of Port Salut sexually assaulted Johnny Jean, a Haitian teenager. A cell-phone video of the assault leaked out a month later, unleashing a firestorm of Haitian and international outrage. The Uruguayan Marines involved plus their commanding officer never faced trial in Haiti, as many demanded, but were shipped back to Uruguay to be judged. Four of the five were convicted in March 2013 of “private violence,” a much lesser charge than rape or sexual assault.

In September 2011, President Mujica wrote a letter to Haitian President Michel Martelly in which he stated: "We apologize for the abuse that some soldiers of my country perpetrated."

Will Uruguay’s rapid departure from MINUSTAH prompt other nations to follow suit and change the policy of UNASUR, the 12-member South American alliance which has had a policy of following the UN’s lead and time-table on Haiti?

The Uruguayan newspaper La Diaria reports that Uruguayan Defense Minister Eleuterio Fernandez Huidobro was confident that other countries in UNASUR agreed with Montevideo. “I think there are countries that have the same opinion as Uruguay,” Huidobro told La Diaria. “This concern is emerging in other countries too. There are political considerations that I believe that our country is not alone” in appreciating, he said.

Other UNASUR nations which provide troops or policemen to MINUSTAH are Argentina, Bolivia, Brazil, Chile, Colombia, Ecuador, Paraguay, and Peru. At press time, none of them have yet publicly commented on Uruguay’s plan to accelerate its withdrawal from MINUSTAH.