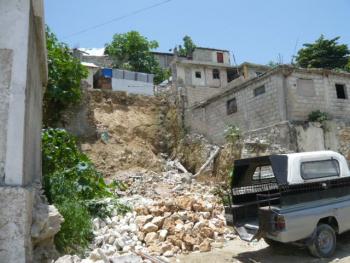 Destroyed and damaged homes in Port au Prince, photo by Roger Annis in 2011

The United States alone committed more than $3 billion to rebuild Haiti—with federal agencies creating a spate of programs and initiatives aimed at helping storm victims get access to shelter and food. But many of those programs have fallen short-- soaring way over budget and way past their deadlines.

The U.S. Aid and International Development agency (USAID)’s “New Settlement Program” for example, intended to build houses for Haitians that lost their homes to the earthquake, has been plagued with cost overruns and hasn’t helped nearly as many people as planned.

Earlier this year, USAID’s inspector general found that the project, which was originally estimated to cost about $53 million, ballooned to $90 million. While the price tag grew, the project shrunk. Indeed, the plan had originally called for building 4,000 houses by 2012, but as of July, only about 816 houses have actually been built.

“The mission did not achieve its goals for constructing houses and developing home sites within budget and on schedule,” the IG said in the report.

The auditor blamed the project’s cost overruns and delays on the agency’s lack of oversight over the contractors. Others blame the cost increases on USAID for awarding contracts to large firms instead of going with smaller, local companies. According to the Center for Research on Globalization, Minnesota-based Thor Construction received $18 million, Mexico-based CEMEX got $7 million and about $35 million went to two Haitian-American firms based in Maryland.

Now, it turns out that there are even bigger problems. A new analysis by the Center for Economic and Policy Research says that 750 houses built under that USAID program were so shoddily built, they will cost millions more to repair.

The report cited the audit from USAID’s IG that said agency workers “did not review contractor’s quality control procedures” which likely led to the poor construction efforts. The auditors said that had they reviewed the contractors’ plans in advance, they would have determined the houses were not adequate. The IG report suggests that the agency’s mistake proved to be quite costly.

Every time taxpayers see another example of bureaucratic incompetence and wasteful spending, it makes them wonder about more of their hard-earned tax dollars being squandered. Thus the call for smaller government, regardless of the consequences.

Now repairing those houses will cost millions of additional dollars. In October, USAID awarded U.S. contractor, Tetra Tech, a $4.5 million contract to repair the homes, which apparently had missing roof fasteners, as well as structural and drainage issues.

The homes will now cost four times the original estimate. And there will still be significantly fewer houses than originally anticipated.

To be sure, the number of storm victims without homes has decreased drastically in the last five years –from about 1.5 million people who were displaced immediately following the earthquake—to about 137,500 now.  The Inspector General credits the decline largely to housing and rental subsidies—many of which were funded by the United States.

Still, the larger issue is that management problems and lax oversight has plagued the massive, billion dollar efforts to help rebuild Haiti—setting back progress to help people devastated by the earthquake in an already impoverished country.