The U.S. must look in the mirror to reduce immigration pressure from Haiti 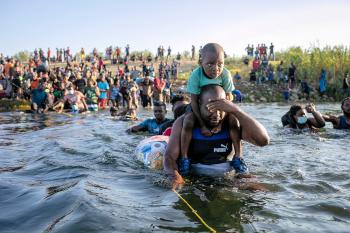 Thousands of Haitians have crossed the Rio Grande river from Mexico to Del Rio, Texas in recent days. Their desperation is driven by decades-long U.S. policies that have undermined Haiti’s democracy and economy.

The U.S. response to the influx of Haitians in Del Rio, Texas — border guards whipping Haitians as they stumble out of the Rio Grande clutching their possessions, and a massive, illegal, expulsion airlift — may play well with the anti-immigrant constituency, but it will not reduce the arrivals of Haitians at our borders. Nor will warnings not to come. The U.S. can only reduce migration pressure from Haiti by ending decades-long policies that have undermined Haiti’s democracy and economy and forced Haitians into the desperate measures we see at Del Rio.

The airlift will deliver its passengers to a dangerous and unstable country. In the past 10 weeks, Haiti has endured a Presidential assassination (still unsolved), a 7.2 magnitude earthquake, a tropical storm, and pervasive gang violence. But the people at Del Rio left Haiti long before the Jul. 7 assassination of President Jovenel Moïse.  Most left years ago, part of the steady flow of Haitians fleeing the increasing corruption, brutality and poverty of the administrations of Presidents Moïse (2017-2021) and Michel Martelly (2011-2016), who governed Haiti for most of the past decade.

THE U.S. HAS UNDERMINED HAITIANS’ ABILITY TO PROVIDE FOR THEMSELVES IN HAITI.

Most of the Haitians at Del Rio first went to South America but were unable to find a safe, dignified existence there, so they made the arduous and dangerous journey north. There are many more on their way, who will keep coming because they have no other choice. The Biden administration knows this, so the warnings and the justification of the illegal expulsions as a deterrence is more for the U.S. audience than for the Haitians.

President Martelly came to power after the Obama administration, led by Secretary of State Hillary Clinton, first supported a deeply flawed 2010 election that excluded the Fanmi Lavalas party and other popular candidates, then forced Haiti’s electoral council to change the results of the preliminary elections, placing Martelly in the runoff. Martelly and his hand-picked successor Moïse enjoyed persistent support from the Obama and Trump administrations, despite spectacular corruption, government-linked massacres, and the resolute dismantling of Haiti’s democratic structures.

Although Haitians hoped for better from the candidate who promised to return human rights to U.S. foreign policy, President Biden continued this support, backing Moïse’s effort to extend his term and a self-serving, illegal constitutional amendment process. Washington installed the current Prime Minister, Ariel Henry, and has propped him up despite more electoral manipulation and Henry’s firing of a prosecutor for suggesting that the Prime Minister’s 4 a.m. calls with a principal suspect in the Moïse assassination be investigated.

The U.S. has been destabilizing Haiti – and generating refugees – since the country emerged from a slave revolution in 1804 into a world run by slaveholding countries that felt threatened by the example of successful, self-emancipated Black people. The U.S. immediately imposed an embargo on Haiti and refused to even recognize the country’s sovereignty until 1862, just before our Emancipation Proclamation. Haitians started fleeing to the U.S. in large numbers in the 1980s in response to terror inflicted by the U.S.-supported dictatorship of Jean-Claude Duvalier. They came in overwhelming numbers after the 1991 overthrow of President Jean-Bertrand Aristide, fleeing the brutal the FRAPH death squad – which also received U.S. support. Haitians again fled to the U.S. when another brutal regime replaced President Aristide after the George W. Bush Administration forced him into exile in 2004.

The U.S. has also undermined Haitians’ ability to provide for themselves in Haiti. President Bill Clinton apologized in 2010 for forcing Haiti to reduce tariffs on U.S. rice, which allowed subsidized U.S. rice to overwhelm the markets and put Haiti’s farmers out of business. The U.S. imposed a development assistance embargo on Haiti in 2000 because we did not like the elected Aristide government’s progressive economic policies. When Haiti’s President Préval tried to raise the country’s minimum wage to $5 per day in 2011, the U.S. forced him to cut it to $3 per day, about a quarter of the minimum needed to support a small family.

Even disaster aid has undermined Haiti’s ability to sustainably support its people. In 2010 President Clinton acknowledged that U.S. aid policy contributed to Haiti’s extreme vulnerability to natural and human disasters.  We promised to “Build Back Better,” but then proceeded to do what we had always done in response to natural disasters: deliver top-down aid based on decisions, usually made in Washington and New York, that predictably failed when they encountered reality on the ground in Haiti. Haitians themselves, whether in government, civil society, the medical field, or internal displacement camps, were marginalized.

EVEN DISASTER AID HAS UNDERMINED HAITI’S ABILITY TO SUSTAINABLY SUPPORT ITS PEOPLE.

The response of the United States, along with other governments and global non-profits, did save lives by providing healthcare, food, and shelter to millions of Haitians. But the emergency interventions sometimes caused long-term harm. Foreign healthcare professionals rushed in, saving lives, but sometimes providing inappropriate treatment or displacing Haitian professionals, some of whom were forced to close their practices or emigrate. In fact, 11  years later, Haiti’s government capacity has been reduced so much that the country did not even start COVID vaccinations until July – after the U.S. stepped in with support.

The Biden administration knows that it cannot reduce migration pressure at our border without addressing the root causes forcing people to flee their homes. It even issued a strategy for doing so in Central America in July. But this strategy consists mostly of suggestions for other governments, with some promise of U.S. help. It includes zero discussion of changing the neoliberal and interventionist U.S. policies that have been driving immigration from Central America, and Haiti.

If the Biden Administration wants to be serious about reducing the crisis on our border, it must start by looking in the mirror and face up to our policies, which have — over the years, decades, and centuries — contributed to coups, dictatorship, and poverty in Haiti. The U.S. has never been good at self-examination: it is easier to blame Haitian asylum seekers for fleeing the brutal rulers we impose on them or deplore the racist whipping by border guards without changing the racist, illegal expulsions of those who were whipped. But none of that will reduce immigration pressure. To do that, we must make a long term commitment to supporting democracy in Haiti, even if Haitians select leaders which Washington would not.

Human rights lawyer Brian Concannon is a board member of the Institute for Justice & Democracy in Haiti.