U.S. seeks extradition from Jamaica of suspect in murder of Haiti's Moise 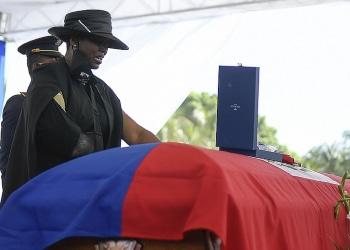 The United States has requested the extradition from Jamaica of a suspect in the assassination of Haitian President Jovenel Moise, the suspect’s lawyer said on Thursday.

Ukrainian children arrive in Canada for cancer treatment considers a key suspect in Moise’s murder last July, was arrested in Jamaica after having fled Haiti.

Joseph has agreed to the extradition, his lawyer Donahue Martin said in a telephone interview.

The United States has become increasingly involved in the investigation of Moise’s murder, with key suspects facing the prospect of trial in U.S. courts as a probe by the Caribbean nation’s authorities stalls.

Moise was shot dead by assassins armed with assault rifles who stormed his private residence in the hills above Port-au-Prince, sparking a man hunt and investigations across several countries in Latin America and the Caribbean.

Days after the murder, then-National Police Chief Leon Charles said Joseph was a key player in the plot, saying he supplied weapons and planned meetings. (Reporting by Kate Chappell in Kingstong, writing by Brian Ellsworth in Miami).