The US should welcome Haitian refugees, not brutalize and deport them 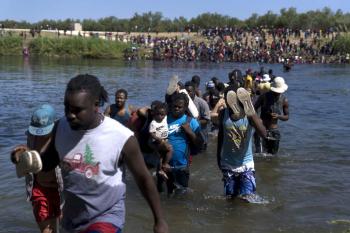 Migrants from Haiti cross the Rio Grande River near the Del Rio-Acuna Port of Entry on the Texas-Mexico border. (Eric Thayer / Bloomberg via Getty Images)

In recent weeks, a caravan of fifteen thousand migrants, most of them Haitians, arrived at Del Rio, Texas to seek asylum in the United States. While many of them had left Haiti years ago, their country of origin has seen great turmoil within the last few months. Former president Jovenel Moïse was assassinated in his home in early July. A month later, a devastating earthquake took the lives of over two thousand Haitians in the country’s greater south.

The images that have since surfaced of Haitian asylum seekers being mistreated by federal agents at the border and the decision to deport most of them back to Haiti have generated an international outcry. Regardless, more than thirty-five deportation flights have landed in Haiti since September 19, and many more are expected to leave in the coming weeks.

These deportations are enabled by Title 42, a policy used under the Trump presidency and continued by the Biden administration which effectively denies migrants of their legal right to seek asylum in the United States on the pretext of the public health risk posed by COVID-19. In light of these developments, the Biden administration has faced sharp criticism, including from now-former US envoy to Haiti Daniel Foote, who resigned in a poignant letter earlier this week.

The current rejection of Haitians at the border may be the United States’ largest mass expulsion of migrants in recent history. It not only serves as an example of the United States’ deeply flawed immigration system but it also points to deep structural issues in Haiti that migrants are eager to escape. Importantly, these issues have been exacerbated by US interference in Haiti’s sovereign political and economic affairs — activity that Foote, in his resignation letter, condemned as “international puppeteering” in Haiti.

Haitian refugees deserve asylum in the United States because the problems many of them are fleeing were either caused or worsened by decades of US political and economic interference in their country.

The United States has long exercised strict control over Haitian affairs — from the declaration of the Monroe doctrine, establishing US dominance over the Western hemisphere in 1823, to the US occupation of Haiti between 1915 and 1934 to multiple direct and indirect interventions including choosing, ousting, and backing presidents and dictators.

To this day, the United States enjoys a shocking level of power and influence over Haiti’s political and economic life. Coupled with the strong presence of the United Nations and the CORE Group — composed of the ambassadors of Germany, Canada, Spain, the United States, France, and the European Union as well as the Special Representative of the Organization of American States — Haiti is subject to foreign actors’ constant self-insertion into internal matters.

That foreign intervention has been blatant, and its consequences have been disastrous. For example, Haiti’s first democratically elected president and radical advocate for the poor Jean-Bertrand Aristide was overthrown by two coups d’état, first in 1991 and then again in 2004, both organized and supported by the United States and its allies.

After the first coup, which led to a refugee crisis and abhorrent treatment of Haitian refugees at Guantanamo Bay, Haiti was plunged into a food crisis. US subsidies on rice exported to Haiti paired with lower tariffs on imported rice — encouraged by economic liberalization programs promoted by the US-dominated International Monetary Fund and World Bank — hollowed out Haiti’s ability to feed itself, essentially making it impossible for Haitian rice farmers to make a living.

The United States again objected to Aristide’s policies after his election in 2000, and quickly moved to block international aid and cooperation before once more removing him from office in a coup. Artiside’s second ouster in 2004 killed the best opportunity in recent decades to assert Haitian sovereignty, build government institutions, and rebuild the economy.

Instead, Haiti furthered a transition to what expert Jake Johnston calls an “aid state,” where aid is used as a tool by outside actors to bypass the government and further the outsourcing of the functions of the government to other countries, international institutions, NGOs, and politically connected groups in the country.

Economic and political interference has not abated in recent years. In the wake of the devastating earthquake and a UN-caused cholera epidemic in 2010, Haiti held elections. On election day, the CORE Group attempted to remove the incumbent president René Préval from office in what was likely an attempt to weaken his party’s candidate, Jude Célestin, in the elections. The first round results were widely contested, and Michel Martelly — who was supported from many outside Haiti, including former US president Bill Clinton as well as then secretary of state Hillary Clinton — argued he had placed second rather than third, beating Célestin. The OAS made a deeply flawed determination that the results should be changed and Martelly should be in the second round instead of Célestin. The United States agreed, leading to Martelly’s eventual election and presidency in 2011.

The legacy of Martelly’s successor Jovenel Moïse, who was propped up this year by the United States despite country-wide protests, and then assassinated earlier this summer, consists of weakened governmental institutions, corruption, an outsourced foreign policy, and the consolidation of remaining decisional power into his hands — which has now resulted in a power vacuum since his death.

Haiti’s parliament has been functioning with only ten members out of 149 since early 2020 due to expiring mandates. Additionally, three judges sitting on the country’s Supreme Court were illegally forced into retirement after taking interest in high-profile cases. In the midst of this political turmoil, there has been a sharp rise in crime and gang activity, largely unopposed by the government.

Human rights organizations have repeatedly noted the involvement of elected officials and sympathizers of Moïse’s Haitian Tèt Kale Party (PHTK) in these crimes. Reports have also shown that most of the guns at the gangs’ disposal come from the United States.

Haitan mass migration to the United States must be viewed in light of this history and in this political context, which makes clear that the United States bears much of the blame for Haiti’s troubles and the subsequent mass outmigration.

Yet US vice president Kamala Harris recently sent a harsh message to migrants coming from the Caribbean and Central and South America. “Do not come,” she said. “Our borders are not open.” These are stunning statements considering that the United States designated Haitians as eligible for Temporary Protected Status (TPS) due to the turmoil in the country just months ago.

With the deportation of Haitians who arrived at Del Rio, it appears the United States will follow through with Harris’s promise, both denying Haitians a legal right of asylum and — at the United States’ own admission, given the TPS designation — denying them a homeland that can guarantee them a safe and secure life. For more than a hundred years, Haitians have lacked the final say over their own destinies. Now the Biden administration is continuing that shameful history by deporting refugees to the ravaged country they went to incredible lengths to escape.

Haitians should be welcomed in the United States, just as many Afghans have been in the wake of the US withdrawal from their war-torn country. Biden should acknowledge that, as with Afghanistan, the United States has a responsibility to these refugees because its involvement in Haiti created the political and economic situation that led to large-scale migration. Redress should include ending the discrimination common toward Haitian migrants, and the loophole that allows Haitians to be strictly categorized as “economic” refugees.

The United States and its allies have transformed Haiti into an aid state that is not controlled by the Haitian people and does not serve them. For that situation to change, the basis of the Haiti–United States relationship — characterized by interference, neocolonialism, and racism — must also change. Like all other people, Haitians have a right to live happy and secure lives, and to decide their destinies for themselves.

Valerie Kaas is a Haitian writer with an interest in Latin America, democracy, and racial and economic justice.

Kevin Cashman is a senior associate at the Center for Economic and Policy Research in Washington, DC. The views expressed here are his own.