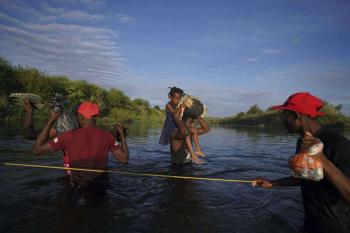 A man carries a little girl over the Rio Grande river toward Del Rio, Texas, as other migrants return to Ciudad Acuna, Mexico. Many cross back and forth to get food and provisions in Mexico. (Fernando Llano/The Associated Press)

Daniel Foote was appointed to the position only in July, following the assassination of Haiti's president. Even before the migrant expulsions from the small Texas border town of Del Rio, the career diplomat was known to be deeply frustrated with what he considered a lack of urgency in Washington and a glacial pace on efforts to improve conditions in Haiti.

Foote wrote Secretary of State Antony Blinken that he was stepping down immediately "with deep disappointment and apologies to those seeking crucial changes."

"I will not be associated with the United States' inhumane, counterproductive decision to deport thousands of Haitian refugees and illegal immigrants to Haiti, a country where American officials are confined to secure compounds because of the danger posed by armed gangs to daily life," he wrote. "Our policy approach to Haiti remains deeply flawed, and my policy recommendations have been ignored and dismissed, when not edited to project a narrative different from my own."

One official, who was not authorized to publicly discuss personnel matters and spoke on condition of anonymity, said that Foote had consistently sought greater oversight of Haiti policy and that the administration did not believe his requests were appropriate.

A migrant camp made up mostly of Haitians has shrunk considerably since surpassing more than 14,000 people on Sept. 18 — many of them expelled and many released in the U.S. with notices to report to immigration authorities. The Department of Homeland Security (DHS) has been busing Haitians from Del Rio, a town of 35,000 people, to El Paso, Laredo and the Rio Grande Valley along the Texas border, and this week added flights to Tucson, Ariz. They are processed by the Customs and Border Patrol at those locations.

The White House is facing sharp bipartisan condemnation. Democrats and many pro-immigration groups say efforts to expel thousands of Haitians without a chance to seek asylum violates American principles and their anger has been fuelled by images that went viral this week of Border Patrol agents on horseback using aggressive tactics against the migrants.

The DHS said Thursday that the Border Patrol has temporarily stopped using horses, following the outcry.

The expulsion flights to Haiti began Sunday and there were 10 by the end of Tuesday, according to Haitian officials. U.S. officials say they are ramping up to seven flights a day, which would mark one of the swiftest, large-scale expulsions from the U.S. in decades.

The administration has been justifying the expulsion of families and single adults seeking entry to the U.S. under Title 42, continuing a practice started by Donald Trump's administration after the pandemic began, turning away some migrants for the stated reason of combating COVID-19 spread.

Haitian migrants trying to cross the Rio Grande river were chased by U.S. border agents on horseback this past week. Some will be deported back to Haiti, a country many say they haven’t been to in years, because President Joe Biden has kept a Trump-era policy that allows them to be deported without the chance to seek asylum. Matt Galloway speaks with Arelis Hernandez, Texas correspondent for the Washington Post, who has been covering the situation from the Mexico-Texas border; and Lee Gelernt, a lawyer and deputy director of the Immigrants' Rights Project at the American Civil Liberties Union. 17:20

Foote served previously in Haiti as deputy chief of mission and is a former ambassador to Zambia. In the new role, he worked with the U.S. ambassador to support Haiti after the assassination of President Jovenel Moïse.

For weeks, he had been quietly pushing in Washington a plan to boost U.S. security assistance to Haiti to pave the way for presidential elections. But Haiti watchers said he became increasingly disappointed with the pace of decision-making in the administration.

Department of Homeland Security Secretary Alejandro Mayorkas described the most recent surge in a congressional committee hearing on Wednesday as "unprecedented."

"We have not seen before such a rapid migration, irregular migration, of individuals as we have observed and experienced with respect to the Haitians who've crossed the border in Del Rio, Texas," he said.

Immigration officials in the U.S. have begun deporting thousands of Haitian migrants camped under and near a bridge in the Texas border community of Del Rio. Haitians have been fleeing destruction and economic instability in their country for years since the devastating 2010 earthquake. 2:01

Mayorkas also promised that an internal investigation into the treatment of migrants by the agents would be completed in "days, and not weeks."

The migrants over the past week have crossed the Rio Grande freely and in a steady stream, going back and forth between the U.S. and Mexico through knee-deep water with some parents carrying small children on their shoulders. Unable to buy supplies in the U.S., they returned briefly to Mexico for food and cardboard to settle, temporarily at least, under or near the bridge in Del Rio, a city of 35,000 that has been severely strained by migrant flows in recent months.

Many of the migrants are said to have been living abroad in Latin America since the massive Haitian earthquake of 2010. It is not yet clear why they decided to move en masse at this particular time, though it is believed difficult conditions in some of the developing nations of Central and South America since the beginning of the pandemic have acted as a pull factor, leading to relatively high numbers of detentions by U.S. Customs and Border Patrol for much of this year.