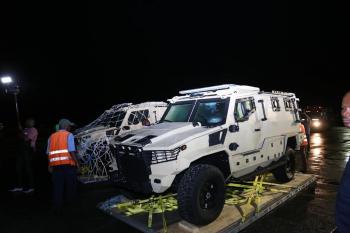 Jovenel Moïse, the president of Haiti who only 5 weeks ago declared the Parliament defunct was present on the tarmac to receive the gifts.

Reports that Haiti purchased the trucks are unfounded. The Trump administration just days ago publicized its gifting the PNH with equipment and tactical gear. This took place in the context of major movements against the hosting of the National Carnival, a major money-laundering occasion for Haiti's political and economic elite.

Haitians and Haitian-Americans have been calling for an end to diplomatic relations with the Haitian government to allow the people of Haiti to resolve a crippling political crisis.

There is a policy of racism guised as assistance that the US American policy makers continue to implement towards Haiti. Haitians cannot be allowed to be adults to resolve their matters.