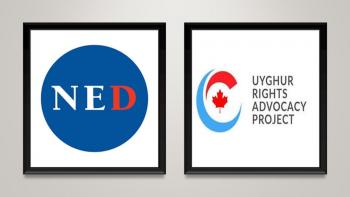 Note: Separatist organizations and the mainstream media have popularized the terms “Uyghurs” and “Uighurs”. However, Uygurs is the proper term for this ethnic group and the one used by the Chinese government.

When you construct a story that is big enough, and you repeat it often enough, you hope that someone will believe it. The team of lawyers, Larochelle Avocats, for the Uygur Rights Advocacy Project (URAP) are hoping this is the case, as they pursue a Notice of Application in front of a judge in a Canadian court. They want the Federal Court of Canada to pronounce that there is genocide in Xinjiang.

URAP was founded in 2020 and it is an affiliate of the National Endowment for Democracy (NED) funded World Uyghur Congress. Its executive director, Mehmet Tohti is also on the executive committee of the WUC. On its homepage, URAP proudly boasts that it is “funded by the National Endowment Fund for Democracy for its advocacy work in Canada.” URAP is the main Xinjiang separatist organization in Canada. Its main work is to lobby and influence Canada’s parliamentarians and members of the government.

The Canada Files’ Editor-in-Chief Aidan Jonah wrote previously that “The NED’s work is explained well by founding member Allen Weinstein, who told the Washington Post in 1991, ‘A lot of what we do today was done covertly 25 years ago by the CIA.’ That work includes regime change, building up opposition politicians and parties loyal to the USA, spreading misinformation against ‘enemy nations’ and more.”

The case URAP is pursuing is vexatious on several fronts. First, it wants to set the ideological and geopolitical agenda for the Canadian government’s foreign policy. Second, it wants the court to force the Canadian government to declare a genocide against the Uygurs in Xinjiang. No legal international bodies have done so because there is no genocide. In fact, even the legal department of the US State Department declared that there was “insufficient evidence” to prove genocide against the Uygurs. Nevertheless, Mike Pompeo on his last day as Trump’s Secretary of State ignored this legal advice and declared that China is committing genocide against the Uygurs. This political decree is maintained by the Biden administration.

URAP’s third-party intervention in a case initiated by Canadians in Support of Refugees in Dire Need (CSRDN) failed, when it asked a Canadian court to ban all goods from Xinjiang which they claimed are made from “forced labour.”

What’s the deal with URAP’s Notice of Application?

URAP’s lawyers are at it again. On February 3, 2022, Larochelle Avocats served a Notice of Application to the Attorney General of Canada in Montreal, to demand that Canada’s federal court declares a genocide is occurring in Xinjiang. As part of URAP agit-prop campaign, Dr. Elwina Ochab, British “human rights advocate”, wrote a piece in Forbes Magazine on the application for judicial review of the “Government of Canada’s acts and omissions in relation to the ongoing genocide against Uyghurs in Xinjiang.”

The Notice of Application offers nothing new and more importantly; the “evidence” is a re-run of issues repeated by the same people, nothing that can be verified by independent sources. It echoes the specious argument that “crime of genocide is currently being committed against the Uygur population on the territory of the People's Republic of China, since at least 2014.” Before we rebut this claim, let’s see what other suppositions the document makes.

The notice gives interesting information on the workings of URAP, financially supported by the US National Endowment for Democracy, a CIA cut-out. The NED is the main source of funds for various Uygur separatist organizations, internationally, and is not far-fetched to think that this money is contributing to the court case.

The court document states that URAP has two full time employees at its Ottawa office and “shares it(s) researches (sic) and resources with parliamentarians….” This is where the Members of Parliament got their prejudiced one-sided picture of the situation on the Uygurs before they passed the resolution to declare a genocide in Xinjiang in February, 2021. To emphasize this, the Canadian parliamentarians’ Xinjiang genocide vote was drastically influenced by anti-China propaganda from the NED-funded Uyghur Rights Advocacy Project group. The Canadian government has not adopted this position, and this is what the URAP lawyers want to change. The legal document goes on to promote URAP Executive Director, Mehmet Tohti, as he is featured in nine of the articles.

The Notice for Application cites the discredited Uyghur Tribunal created by the World Uyghur Congress, of which Mr. Tohti is an executive member. The Canada Files and other media outlets have debunked the numerous erroneous statements made in this legal document. It goes on to repeat the usual accusations: “forced labor,” “forced sterilization of Uygur women,” “torture and sexual abuse in concentration camps.” The document tones down the number of Uygurs incarcerated to 1 million from the often cited three million, as it quotes from the US “Uyghur Human Rights Policy Act” passed by Congress in June 2020. In following the American lead to weaponize human rights, the Canadian government imposed sanctions against Chinese officials last year for what it claimed “gross and systematic human rights violations” against Uygurs.

The American influence is all over this document as it mirrors the US legislation as the de facto standard in pursuing the case of “genocide” against the Uygurs. The Notice spent a lot of ink to use American legislation to justify their claims, as 35 of the articles (#62 to #96) describe the US position. Article 71 repeats Pompeo’s bogus claim that - “On 19 January 2021, the Secretary of State of the USA declared that genocide is being committed since at least March 2017…” The URAP lawyers ignored the legal opinion of the State Department lawyers, as mentioned above.

Another inconsistency in the Notice of Application is the number of Uygurs in detention. Article 90 ups the number to “one and a half million (1,500,00) Uygurs” after citing 1 million in Article 66. Sometimes when you can’t get the story straight, you can trip up over the details.

It is perplexing that human rights advocates accept and promote these American allegations when it is obvious to the “international community,” using the terminology from their document, that the US is the biggest violator of human rights, with the past and present genocide of Indigenous peoples and the racist treatment and killings of African Americans as the legacy of slavery.

Now for the underlying claim of “genocide” against the Uygur people in the Xinjiang Uygur Autonomous Region of China (XUAR). Anyone who has objectively studied the situation in the XUAR without even visiting the area can say that the Uygur population is thriving. The Uygur population in Xinjiang increased by 25% from the 2010 census to 2018, from 10.17 million to 12.72 million. The Uygur population doubled in 40 years (5.96 million in 1982) with a corresponding improvement in the standard of living. The Han ethnic group in Xinjiang only increased by 2 per cent, 8.83 million to 9 million from 2010 to 2018. The number of college students in Xinjiang increased by 130% and high school students increased by 107% in the same period. Economically, the GDP increased 224 per cent in Xinjiang from 2010 (544 billion Yuan) to 2018 (1220 billion Yuan) and China eliminated absolute poverty in Xinjiang by 2020. These are just numbers but to anyone who has visited Xinjiang can see the dynamism of the region with the Uygur written scripts in public places and let’s not forget that the Uygur script is one of the five languages on the Chinese currency. None of this was mentioned in the URAP claim.

Much can be said to counter all the allegations made in the URAP Notice of Application. The Canadian government, politicians and media need to enter into a balanced public discussion on what is the reality in Xinjiang before an accusation as serious as genocide can be declared. It is not known how the government lawyers will respond to this court case. Given the government’s anti-China stand, it is unlikely that the Canadian government and their lawyers will go to the heart of the genocide and human rights accusations against China to expose the truth. Most likely, they would probably argue that the court has no standing to determine Canada’s foreign policy.

However, this case provides an opportunity to investigate and debate the reality of the situation of the Uygurs in Xinjiang. URAP lawyers will have to prove their allegations in court but who will call opposing expert witnesses to ensure a fair hearing? It is doubtful that government lawyers will put the genocide claim on trial and call opposing witnesses. It is possible for a third party to intervene by providing an amicus brief to oppose the genocide claims. This is an expensive and challenging prospect which relies on money and resources to intervene. Anti-imperialist organizations and lawyers do not have the kind of money that URAP has to pursue this case.

By funding the Uyghur Rights Advocacy Project, the US government-funded National Endowment for Democracy is skewing public debate and debate within Canada’s parliament. The Uygurs, Tibetans, Mongolians, Hong Kong, and Taiwan province are used as pressure points to destabilize the Chinese government in the interest of maintaining US hegemony. The current international environment is not conducive to a free and open debate on vital issues of equality, justice, and peace. It will be interesting to see how this court case turns out. One thing is clear, the “truth” will not emerge any time soon, since the Uygurs are used by the Western imperialists and their “human rights” advocates as pawns to cast China in a bad light.