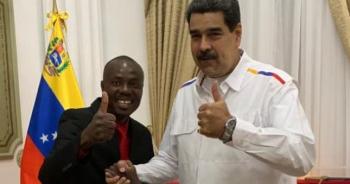 Former Senator Jean-Charles Moïse, one of the influential leaders of the Haitian opposition, traveled to Caracas last week and met with Venezuelan President Nicolas Maduro. Mr. Moïse, a likely candidate for president in Haiti's next elections, was introduced by President Maduro to fifty delegates from African countries, in summit, whom he addressed on Tuesday.

In his declarations, Moïse, the former three-term Mayor of Milot, Nord, criticized the administration of Haitian President Jovenel Moïse's vote against Venezuela in the Organization of American States (OAS). The vote, which was in favor of military intervention in Venezuela was criticized by an overwhelming majority of Haitian citizens and Haiti's neighbors in the Caribbean.

"It was important for me to be here today to address the Venezuelan people. I can not speak without apologizing to the Venezuelans and President Maduro. On behalf of the Haitian people, I apologize to you, Mr. President, for Haiti's vote against your country at the OAS," Mr. Jean-Charles Moïse, who is of no relation to Jovenel, said.

"...for nothing in the world, Haiti should never vote against Venezuela. This should not be a diplomatic or economic vote, but a historic vote and solidarity," said Mr. Moïse to a resounding applause from the crowd, including President Nicolás Maduro who appeared emotional.

Mr. Moïse said he addressed the summit and the African delegates in Creole "because this language has allowed all slaves to regroup and fight against the slave system."

In front of a public acquainted with his cause, Jean-Charles Moïse launched the Haitian war cry, "Ayibobo!" in salute to Thomas Sankara, Hugo Chavez, and to salute the release of former Brazilian President Lula Da Silva, not to mention, the "resistance" of Nicolás Maduro in the face of the United States of America.

The leader of the Pitit Dessalines political party also thanked Venezuela for organizing the congress, which he considers to be a crossroads where the sons of Africa meet. "To all the children of Africa, I tell you that we have no atomic bomb or missile. Our strength lies in our unity and solidarity. It is time for us to fight together to defend our integrity, our sovereignty, our natural resources," Mr. Moïse called.