The violence of non-violence: Canadian sanctions policy in times of covid-19 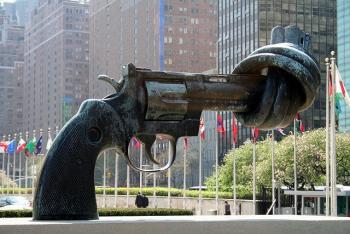 Both at its birth, and later in the paradigmatic Alma Ata declaration, the WHO established a human right to health which required not only access to health care but the satisfaction of a broad range of human needs, such as appropriate nutrition, adequate housing, and personal safety. Decades later the notion that public policies beyond health policy shape health was consolidated in the concept of Health in All Policies. Foreign policy, which includes areas as diverse as trade, immigration, and matters of peace and war, has arguably dramatic implications for human health. However, few areas of public policy have received such scant attention as foreign policy. The health and social effects of Canada’s sanctions policy – an aspect of the country’s foreign policy – on civilians in targeted nations is a case in point. In this article we attempt to fill this gap.

While there is no shortage of evidence for the economic, social and health effects of sanctions, both state and non state actors – among the latter, many ostensibly averse to the use of military force – neglect, when not altogether ignore, the devastation caused by sanctions. Take, for instance, the case of sanctions on Venezuela: the policy has frozen assets, banned banks from transactions, and impeded the sale of oil, Venezuela’s main source of income, making the purchase of essential goods such as food and medicine all but impossible, thus targeting not only the Venezuelan government but the entire population.

Why, then, the widespread use of sanctions by the Canadian state on so many countries – 20 at the time of this writing, over 10% of countries in the world?

One reason proffered by supporters of sanctions is that this policy approach is a nonviolent way to put pressure on governments seen as involved in violation of, or reluctant to abide by, international norms. And there exists indeed a dominant narrative – held not only by the Canadian corporate media, but also by academics, including many on the left, that a “dictator” rules Venezuela, an allegation intended to legitimizes sanctions on the country. Of note, it is a narrative that toes the line of notorious US regime-change operations – in the past conducted covertly by the CIA, and now overtly through creative “hybrid wars” – and that parallels Canada’s own elite interests – in mining, tourism, and banking, to name a few.

It is, we note, a supreme irony that to curb a government accused of violating international law, Canada should be compelled to violate those very laws. No less of an irony is that to avoid the (immediate) violence of military interventions a policy would be put in place that exerts no less extraordinary (even if delayed) violence on sovereign nations, preventing them to use their own resources as they see fit, choose how they wish to govern themselves, and most immediately, purchase essential food and medicine for their people, all of which have demonstrable effects on collective health and well-being. To mention one, US-imposed sanctions on Venezuela and enthusiastically endorsed by the Canadian government, have caused an estimated, completely avoidable 40,000 deaths – likely as many as 100,000 – for no apparent reason other than to achieve a US-style “democracy”.

In the meantime, democracy US-style is far from being welcome by “Third World” masses, or even the masses in wealthier countries – for instance, 60% of Germans appear to not care much for it. This unwashed opinion – often dismissed as a preference for “populism” over “democracy” – is shared by the majority of Venezuelans, who favour a mode of governance that has provided housing, food, health care and education to millions over the last 20 years, notwithstanding the wrath this governance style provokes in Washington and Ottawa. In the meantime, the Canadian and US people are never told why Saudi Arabia, a human rights violator if there ever was one, has not made it to the list of sanctioned countries.

The targeting of civilians to achieve political goals, through sanctions or other means, is explicitly forbidden by international law and constitutes a crime against humanity, as stated in major international documents – the Geneva Convention (art.33), the UN Charter (Art. 2), the Organization of American States (Chapter IV), the Hague Convention, the Vienna Declaration, and the Rome Statue of the International Criminal Court. Indeed, these measures should not be called “sanctions” as sanctions refer only to measures in agreement with the United Nations, and not to unilateral coercive measures, which is what Canada, the USA and Europe are imposing on Venezuela.

Be that as it may, these coercive measures, lethal as they can be in “normal” times, have not only not been eliminated even under the unprecedented challenge of COVID-19, they have been further intensified. More recently, they have even been exacerbated by a gangster-style operation that has gone as far as putting a price on the head of Nicolas Maduro, the democratically elected president of Venezuela, and on the heads of other government officials – on literally “trumped up” charges of participating in a “narco-terrorism conspiracy”. These charges, we note, have been dismissed by Pino Arlacchi, former Executive Director of the United Nations Office for Drug Control and Crime Prevention, as “basura politica” (political garbage), even as the move has been celebrated by the Western (so-called) liberal media.

While Canada has not openly participated in this assault, it has enthusiastically endorsed it, and, undeterred, continues to impose coercive measures that undermine the ability of Venezuela’s public health system to protect not only Venezuelans, but also, given the interconnected nature of contemporary society, world populations, as recognized even by sources that are no friends of Venezuela. Which only indicates that this pandemic, unique as it is in many ways, is remarkably similar to other larger social disruptions in how it merely exacerbates, but does not create, existing inequities in whose voices are heard and whose can be safely ignored, within and among individuals, social groups and nations.

It is about time that the Canadian state took seriously international law, the UN Charter, the right of self-determination of sovereign states and plain human decency, in addition to the principles, although not always the practice, of health equity, enshrined in multiple of its own documents. This, we believe, is critical if Canada wishes to stand on the right side of history.