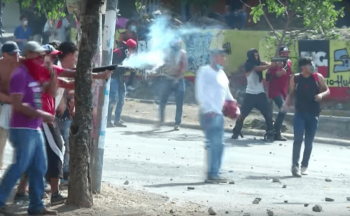 Referring to the violent opposition protests in Nicaragua, President Daniel Ortega has said, “Peace must be defended every day to avoid situations like these being repeated.” (Screen shot / YouTube)

The violent coup in Nicaragua has failed. This does not mean the United States and oligarchs are giving up, but this phase of their effort to remove the government did not succeed.  The coup exposed the alliances who are working with the United States to put in place a neoliberal government that is controlled by the United States and serves the interests of the wealthy. People celebrated the failure of the coup but realize work needs to be done to protect the gains of the Sandinista revolution.

The people of Nicaragua showed their support for the democratically elected government of Daniel Ortega with a massive outpouring in Managua in a celebration of the 39th anniversary of the Sandinista Revolution. In addition to the mass protest in Managua, various cities had their own, in some cases very sizeable. ones.

People have wanted peace to return to Nicaragua. They have also wanted the roadblocks removed, which have resulted in closed businesses, job loss and loss of mobility. Roadblocks have been removed, even in the opposition stronghold of Masaya. There were two opposition deaths and one police officer killed in the removal. There was also an earlier death of a policeman in Masaya, captured when he was off-duty, tortured and burnt to death. This brings the total of police killed since April up to at least 21 with hundreds injured. With the opening of the main road on the east side of Masaya, all Nicaragua’s main routes are open to traffic and buses etc are operating normally.

At the rally, President Ortega called on the people of Nicaragua to defend peace and reinstate the unity that existed in the nation before the violent opposition protests. He described how the violent coup attempted to destabilize the country and ended the peace that has existed through the eleven years of his time in office. He said, “Peace must be defended every day to avoid situations like these being repeated.”

He also criticized the Catholic Bishops for their role in the failed violent coup. Ortega described the Episcopal Conference of Nicaragua as “coup leaders” for collaborating with the opposition during the protests. Not only did the Catholic leadership side with the opposition during the national dialogue, but priests were involved in kidnapping and torture. Pope Francis has a lot of work to do to reign in the Catholic Church in Nicaragua. If their role in these violent protests and opposition to an economy for the people is not stopped, this will become a scandal for the Catholic Church.

Other Latin American leaders spoke out against involvement in the coup. Bolivian President Evo Morales condemned US “interference” in Nicaragua, denouncing the “criminal strategies” used against the government of Daniel Ortega. Morales accused the United States Agency for International Development (USAID), and the National Endowment for Democracy (NED) of “openly supporting violence” in Nicaragua. Also at the celebration were the foreign ministers of Cuba and Venezuela, Bruno Rodríguez Parrilla, and Jorge Arreza, all supporting Nicaragua over the violent coup of the United States and oligarchs.

The United States is Escalating Economic War and Support for Opposition

The United States is not giving up. Also on the anniversary of the revolution, the NICA Act, designed to escalate the economic war against Nicaragua, was introduced in the Senate. It has already been passed by the US House of Representatives. The Senate bill, called the Nicaragua Human Rights and Anti-corruption Act of 2018, imposes sanctions, calls for early elections and escalates US intelligence involvement in Nicaragua. It is a law that ensures continued US efforts to remove the democratically-elected government.

At the same time, USAID announced an additional $1.5 million for Nicaragua to build opposition to the government. This will fund the NGOs that participated in the protests, human rights groups that falsely reported the situation, media to produce the regime change narrative and other support for the opposition.

The coordination between Nicaraguan opposition and the United States was shown by Max Blumenthal’s attempted visit to an organization that funnels USAID and NED money to the opposition. He visited the Managua offices of the Institute of Strategic Studies and Public Policies (IEEPP in Spanish), but it was closed because its director, Felix Maradiaga, who was at the heart of the violent unrest, was in Washington, DC seeking more funding from USAID.

On July 18, the US-dominated OAS passed a resolution concerning “The Situation in Nicaragua.” An earlier effort to endorse a report of the Inter-American Commission on Human Rights (IACHR) was so biased that it failed. The report ignored the opposition’s widespread violence and only reported on the defensive violence of the government. The resolution approving the IACHR report was supported by only ten out of 34 countries.

The resolution, which was finally passed by the OAS, condemned violence on all sides and urged Nicaragua to pursue all options including the national dialogue to seek peace begun by Ortega. On the issue of elections, the resolution urged Nicaragua “to support an electoral calendar jointly agreed to in the context of the National Dialogue process.” Only this mainly symbolic resolution could pass muster in the OAS, despite US domination.

What Happened and What Was Learned

In our article “Correcting the Record: What Is Really Happening In Nicaragua,” Nils McCune and I describe what was behind the violent coup attempt. We reported that there was a lot of misinformation on what was occurring in Nicaragua, indeed the false narrative of regime change was part of the tactics of the failed coup. Perhaps most importantly we described the alignment of forces behind the coup.

The coup was a class war turned upside down. The Ortega government includes none of the oligarchic families, a first in the history of Nicaragua. He has put in place a bottom-up economy that has lifted people out of poverty, provided access to health care and education, given micro-loans to entrepreneurs and small businesses and created an economy energized by public spending. Ortega expanded coverage of the social security system; as a result, a new formula was required to ensure fiscal stability.

Ortega made a counter-proposal to the IMF/business proposal, which would cut social security and raise the retirement age. He proposed no cuts to social security and increasing employer contributions by 3.5% to pension and health funds, while only slightly increasing worker contributions by 0.75% and shifting 5% of pensioners’ cash transfer into their healthcare fund.  These reforms were the trigger as it was the business lobby who called for the protests.

The forces aligned with the violent coup included the oligarchs, big business interests, foreign investors (e.g. Colombian financiers), the US-funded NGO’s and the Catholic Church, a long-term ally of the wealthy. Also involved was the Movement for Renovation of Sandinismo (MRS), a tiny Sandinista offshoot party, of former Sandanistas who left the party when Ortega lost an election in 1990 who are aligned with the US State Department.

Regarding students, there were already student protests around university elections, and these were redirected by the violent coup effort and supported by a small minority of students from private universities, the April 19th Movement. Some of these students had been brought to the US by the Freedom House, which has long ties to the CIA and met with far-right interventionist members of the US Congress, including Rep. Ileana Ros-Lehtinen, Sen. Marco Rubio, and Sen. Ted Cruz.

These groups acted in opposition to the bulk of Nicaraguan society and showed their true colors. This includes:

No doubt more will come out about this in the future as the coup is researched and analyzed. As the facts become clear, the opposition will lose more political power and be even less likely to win elections. The blockades of roads with violence undermined the economy and had a negative impact on the poor and working class. If it becomes evident that this was a strategy of the opposition, they will lose power. NGO’s that are funded by the US and run by members of the MRS will be noted for their dishonest narrative and will be seen as an arm of the United States and not trusted by the people of Nicaragua. Media outside of Nicaragua will come to understand that human rights groups and NGOs are not reliable sources of information but need to be questioned. They need to be pushed to break their ties with the United States.

This does not mean all is well on the Sandinista side of the alliance of forces. The coup is an opportunity for self-reflection and self-criticism that is already happening, as seen in this list of 20 results from the coup, which begins with “A more consolidated and United FSLN.” In addition, the Action Group of the Solidarity with Nicaragua Campaign put forward seven propositions to unify around. The protest took advantage of challenges the Nicaraguan government faces in continuing to lift up the poor and economically insecure. It shows their need to build their capacity to quickly let the public know their side of the story. And, it shows the need for planning for a post-Ortega Sandinista government, as the president is in his third term.

The anniversary of the revolution was a good beginning at strengthening the unity of the Sandinista movement and celebration of the defeat of the coup, but there will be challenges ahead. Nicaragua is a poor country that needs foreign investment. If the United States escalates the economic war, which seems to be the intent, it will make it challenging to continue the social and economic programs that are lifting up the poor. Nicaragua had relied on investment from Venezuela, but it is also in the midst of an economic war, which along with the low oil prices has created economic challenges for them. Nicaragua has begun to build economic relationships with China, Russia, Iran and other countries; these will likely need to expand.

The misinformation was deep and widespread. Inside Nicaragua, there were stories of students being killed that never happened but that escalated the protests. The opposition claimed to be nonviolent when their strategy was to use violence to force regime change while the government quartered the National Police. False news and videos of attacks on neighborhoods and universities never stopped being manufactured.  One example, students calling for help and claiming they were under attack, was later exposed in a video showing the students practicing the false social media narrative.

Peace and justice activists in the United States and western nations have learned they need to be much more careful believing reports on what is occurring in Nicaragua. The US-funding of NGOs involved in women’s issues, environmental protection and human rights in Nicaragua make them questionable sources of information for justice advocates. In addition, US-funded regime change efforts are getting more sophisticated at social media; and thus, care must be taken as social media has it is abused by regime change advocates. We must look to other sources that have shown the ability to report accurately e.g., Tortilla con Sal, Telesur, Redvolucion. Peace and justice advocates must be grounded in anti-imperialism and nonintervention by the United States.