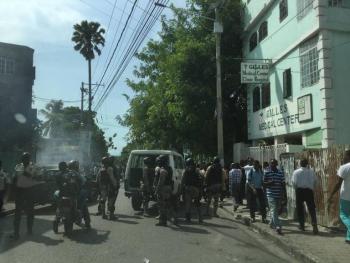 Anti-government protesters Tuesday turned the streets of Haiti's capital into a fiery obstacle course of burning cars and tires, hurling rocks and placing bricks in the middle of the road to protest several new tax hikes.

The demonstration, which was the most violent and largest since Haitian President Jovenel Moïse was inaugurated Feb. 7, came days after the parliament approved the president’s ambitious $2.2 billion budget.

Led by a former presidential candidate, Jean-Charles Moïse, protesters launched a military-style operation, blocking key intersections around the capital and paralyzing metropolitan Port-au-Prince. Behind the presidential palace, masked Haiti National Police officers were pelted with with rocks after they fired stinging water and tear gas at protesters, sending school children and pedestrians running for cover.

In front of the law offices of government Planning Minister Aviol Fleurant near downtown, two cars were set ablaze and the windows of parked cars at a nearby business were busted. In Delmas, rocks were thrown into the windows of local businesses.

At the root of the anger are several new revenue schemes — fee hikes for property ownership, passports and traffic infractions — that were put in the budget and adopted by parliament just hours before Hurricane Irma skirted Haiti's northern coast, flooding farms and damaging more than 8,000 homes throughout the northern region.

The budget includes a 74 percent boost in salaries, cars, staff and travel per diem for members of parliament. Also in the budget is a new tax to be levied on Haitian citizens before they can access government services. The amount — 10,000 gourdes or $159annually, depending on the exchange rate — was also being required of Haitians living abroad.

During the Senate vote on Wednesday, senators were divided on whether to kill the measure or keep it. In the end, Senate President Youri Latortue cast the deciding vote to remove the tax for the diaspora. But opposition Sen. Evalière Beauplan, who opposed the tax, said its removal was not handled legally and there is “total confusion,” as to whether it is still legally required.

At one point during the Senate debate, Sen. Antonio Cheramy, snatched up the budget document and ripped it up, yelling "stop the thieves," a reference to senators who supported the budget. The palace has defended the budget, saying it will allow Moïse to begin to fulfill his promises to Haiti’s nearly 11 million citizens.

Cheramy defended Tuesday's protest, which was halted by police before protesters could move to the tony suburb of Petionville, but said he did not condone the violence.