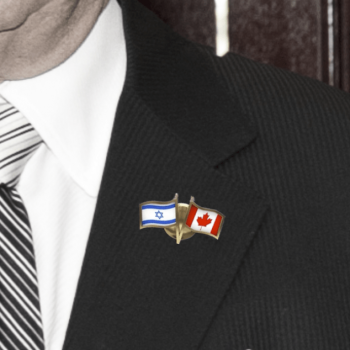 In late May, as Israel’s latest bombardment of Gaza drew to a close, a group of activists poured fake blood on the steps of the Israeli consulate at Yonge and Bloor in Toronto.

“We’re here to be sure that the blood on the hands of Israel is visible,” group spokesperson David Mivasair, a rabbi and founder of the Ahavat Olam Synagogue in Vancouver, explained at the time.

Even though the fake blood was washed off within 30 minutes, the next day two Toronto police officers showed up at Mivasair’s Hamilton home at 11pm and arrested him, having acted on complaints from Israeli Consul General Galit Baram.

While swift in meting out justice for some harmless red paint, Canadian authorities have shown little interest in tackling what appears to be contraventions by Israeli diplomatic representatives of this country’s Foreign Enlistment Act — a much more significant violation, as law-breaking goes, and one with deeper consequences.

Recruiting for a foreign occupying army?

On several occasions the Israeli consulate in Toronto has advertised that an Israel Defense Forces (IDF) representative is available for personal appointments, for those wishing to join the Israeli military.

In 2019, the consulate announced that “an IDF representative will conduct personal interviews at the Consulate on November 11-14. Young people who wish to enlist in the IDF or anyone who has not fulfilled their obligations according to the Israeli Defense Service Law are invited to meet with him.”

In addition to facilitating enlistment at their offices, the consulate has arranged for Israeli soldiers and veterans to speak in local schools, summer camps, and other venues with the apparent goal of encouraging teenagers to enlist.

But recruiting Canadians for a foreign military contravenes the Foreign Enlistment Act, which states that “any person who, within Canada, recruits or otherwise induces any person or body of persons to enlist or to accept any commission or engagement in the armed forces of any foreign state or other armed forces operating in that state is guilty of an offence.”

Over the past eight months the Canadian Foreign Policy Institute, Just Peace Advocates and others have been pressuring Canadian authorities to apply the Foreign Enlistment Act vis-à-vis the Israeli military. A public letter signed by Noam Chomsky, Roger Waters and other prominent individuals was released in October. A formal legal complaint was delivered to Justice Minister David Lametti, naming Consul General Baram as an individual who has potentially violated the Act.

Since then, new evidence concerning recruitment for the Israeli military has been delivered to the police. In April Rabbi Mivasair launched a parliamentary petition that calls upon the Minister of Justice “to undertake a thorough investigation” and “if warranted lay charges against those involved in recruiting… for the IDF.” Sponsored by NDP MP Matthew Green, the petition has been signed by over 7,500 individuals.

An “asset” for Israel

Recruitment for the IDF, however, is just one of the ways Canada is providing exceptional support for Israel’s 54-year occupation of Palestine — that backing has also come in political, diplomatic, charitable, and economic forms.

Established “to recognize and honor the contribution of Lone Soldiers to Israel,” Toronto’s HESEG Foundation spent $9 million in Israel in 2018. A year later, the Canadian Zionist Cultural Association allocated $1.7 million to Yahad, which claims to be “100% for the welfare and wellbeing of IDF soldiers” and states that “with all overhead costs financed by Israel’s Ministry of Defense, 100% of all donations are utilized for their objectives without any overhead.”

In the past, tax-deductible charitable donations made in Canada have gone to new facilities and beautification efforts on military bases.  While little discussed, the subsidy Canadian taxpayers offer Israel-focused charities is among the most significant forms of Canadian support for what human rights groups like Human Rights Watch and B’Tselem have called Israel’s apartheid policies.

To cite just one example, thousands of inhabitants were expelled from three villages in the southwest corner of the West Bank in 1967, and many of their homes were demolished. The Palestinians villagers were not allowed to return, and a few years later “Canada Park” was established with funds for which Canadian donors receive tax rebates.

The Liberal Government’s support for the dispossession of Palestinians extends further still. Since coming to power in 2015, the Liberals have voted against over 50 UN resolutions upholding Palestinian rights. In 2018 former foreign minister Chrystia Freeland said Canada would act as an “asset” for Israel if it gained a UN Security Council seat (it didn’t win the seat). Canada recently withdrew from a major UN conference on racism, claiming that it would “unfairly single out and target Israel for criticism”.

And while the Canadian Embassy in Israel organized a celebration of Canadians fighting in the Israeli army, it has criminalized Palestinian political life through its terrorist list. Several Palestinian organizations, including the Popular Front for the Liberation of Palestine and the democratically elected Hamas, have been put on the list, which bars Canadians from offering any material support.

Support for Israel’s policies and military intervention has been strong among Canada’s elites since the country’s founding and expansion through war. While past government saw it as advantageous to feign neutrality in order to be considered an “honest broker” in the region, Canada’s foreign policy – whether run by Conservatives or Liberals – has been aggressively pro-Israel for more than a decade now.

US Secretary of State Alexander Haig once referred to Israel as “the largest American aircraft carrier in the world that cannot be sunk.” Whether through military intervention, covert operations, arms distribution, espionage or diplomacy, Israel has been projecting its own and U.S. power in the Middle East. Even as public opinion has shifted significantly toward Israeli military occupation and aggression, elites in Canada still see their interests as aligned with the country’s belligerent behaviour.

There’s much to change about Canada’s policy toward the Middle East, but confronting the hypocrisy around the enforcement of our domestic laws is a good place to start. Applying laws equally within its borders should be a minimum requirement for any constitutional democracy.

Until then, our government will appear to be more concerned about paint splashed across the steps of an office building than a consulate recruiting Canadians into a foreign military that regularly commits war crimes.