‘We are fighting the system’: Haiti lawyers taking rape to the courts 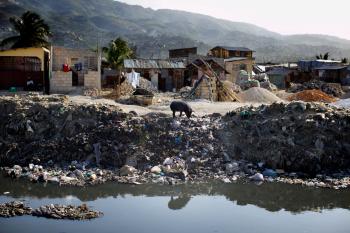 Every morning, three lawyers navigate the gang-ridden, treacherous roads of Port-au-Prince to get to work. Of the women’s two priorities of the day this is the first: to get to and from the office safely. The second is fighting Haiti’s legal system from inside, trying to win justice for women who have been raped.

Sexual violence linked to armed gangs in Haiti is not new but the situation has significantly deteriorated since the assassination of the president last year, which has left the country in a power vacuum.

The Bureau des Avocats Internationaux (BAI) in Haiti’s capital, a human rights law organisation, set up a rape project in the wake of the dramatic rise in sexual attacks predominantly on women in the displacement camps after the 2010 earthquake.

The lawyers – Abigail Derolian, Marie Kattia Dorestant-Lefruy and Gladys Thermezi – help victims through the legal process, from lodging a statement at the police station to preparing the case and representing them at trial – if there is one. Of the 528 cases they’ve worked on since the 2010 earthquake, only 10 have gone to trial.

“When you live in a society with a lot of problems, women and girls always suffer. In such a situation, gangs use women as weapons of war to get revenge, to show what they’re capable of,” says Derolian.

“We’re not a country that promotes human rights, particularly women’s rights. Women don’t know that they can live with dignity, that they can get justice. We have a lot of women who are raped, and we know that the majority remain silent because they’re afraid.”

An assessment of Haiti by the UN high commission for human rights in 2021 found gang-related sexual violence was increasing. “Rape was used as a weapon to humiliate, terrorise and reinforce the control of gang members over local populations. In some areas, the feeling of impunity is so pervasive that rapes have been perpetrated in broad daylight,” it said.

Karlyn*, who is being supported by BAI, was attacked during the day by two men.

“I had to resign from my work at a garment factory and move to the countryside because gang members were looking for me,” she says. Her case is waiting at the state prosecutor’s office.

In its latest figures published last March, the UN estimates 23% of married or cohabiting women will be sexually or physically abused by a partner in their lifetime. Last year, the UN Office for the Coordination of Humanitarian Affairs said the number of recorded cases in Haiti increased by 377% in 2020.

BAI, in partnership with the US-based Institute for Justice and Democracy in Haiti, offersmuch-needed support.

Women are referred from organisations such as Médecins Sans Frontières, who provide initial medical care after an attack, and from an extensive network of community support workers.

“We have an obstacle in getting justice and that is the judicial system. We are fighting the system. We work double the hours to make sure the victim won’t be discouraged. We don’t stop investigating,” Thermezi says.

Corruption, stigma and victim-blaming is rife, the lawyers say. Bribery is all too common in the courts while judges will ask questions such as: “What were you doing out at this hour of the day? What were you wearing? Isn’t this a love affair?”

The BAI lawyers remain steadfast. “I come from a poor, voiceless family and I’m happy to defend women who don’t have anyone to speak out for them and who don’t have money for legal services,” says Dorestant-Lefruy.

“We face a lot of obstacles in getting justice for women … but the work gives me the strength and courage to speak up for these women.”

* Name has been changed